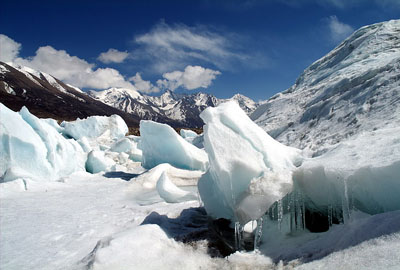 The area of inland lakes in the Qinghai-Tibet plateau has expanded 26 percent in the past 20 years, according to new research results.

The area of inland lakes in the region, which has an average altitude of 4,500 meters, has expanded to 32,300 square kilometers from 25,600 square kilometers 20 years ago, according to the Institute of Qinghai-Tibet Plateau Research with the Chinese Academy of Sciences.

Before the 1990s, the lake area in the region was shrinking, but began to expand after that, said Zhang Guoqing, an assistant researcher with the institute.

The rapid thawing of glaciers and increased precipitation contributed to the expansion of lakes. Due to global warming, glaciers in the region have shrunk by 15 percent in the past 30 years. Annual runoff from glaciers rose from 61.5 billion cubic meters to 79.5 billion cubic meters during the same period, which replenished the surface water, rivers and lakes.

The Serling Tso Lake, the second largest lake in Tibet with an area of about 2,200 square kilometers, has been expanding by 54 square kilometers and rising by 0.67 meters every year in the past decade.

The tendency to expand will continue in the short term, which will help the cultivation and irrigation of crops as well as rehabilitation of the environment, said Zhang.

But rising lakes have inundated some pastures and caused geological disasters, including floods and landslides.

Related articles
Monks and Nuns in Tibet A lot of people are quite courious about the life of the monks in Tibet."Monks and nuns who are within the range of the approved posts each will get a subsidy o
Tibetan food--Tsampa Zamba, was spelled tsampa; it is made from roasted flour called nas, mixed and rolled into balls with the fingers of the right hand. It is often eaten when havi
The Beautiful Lady's fantastic tour The Mt. Everest standing in the distance, surrounded by the clouds.On thier way back to Shigatse they found a family living in this nomad tent.Ms. Maya was so e
Tibetans and the religion Once you are in Tibet, you could see lots of Tibetans pray in from of the monasteries or temples.
Demolition of Guangming Teahouse in Lhasa Guangming Teahouse used to be a well-known old brand teahouse. Sadly the demolition of Guangming Teahouse is a major event in the lives of locals recent days.
Tibetan Horse Racing Festival Horse racing has always been one of the favorite sports of Tibetan people. And nowadays, horse racing festival held in summer has become a window to understand Tibetan culture.