Best Places to Stargaze in Tibet

In the daytime, we can only see Sun which is 149,597,870 kilometers away from Earth. However, when the night falls, we’re able to see stars that are millions of light years away. Stargazing has become such a precious memory in the heart of modern people now living in the cities with light pollution. If you want to see the starry night again in person, Tibet is a place you shall go. We’re here to give you a guide on where to stargaze in Tibet.

#1 Namtso Lake
Introduction: Namtso has the meaning of sky lake in Tibetan language. With the altitude of 4,718 meters, it is one of the lakes that are close to sky. Namtso Lake is one of the Great Three Sacred Lakes in Tibet. To the oldest and indigenous religion of Tibet-the Bon religion, Namtso Lake is regarded as the lake with the greatest religious significance, making it a famous pristine place for Tibetan people these days. To stargaze at Namtso Lake, you’ll not only have the gorgeous views of numerous stars, but also the magnificent snowy mountains looming at the backdrop. Among the rolling mountains sit the legendary Mount Nyenchen Tanglha, the guardian and husband of Namtso Lake in the mystery. With zero light pollution and high altitude, if it’s a clear day, this will be the perfect place with all best advantages to have a thrilling stargazing experience.

Shooting spots and times: About five kilometers away from Tashi Peninsula, is the starting point of the broad range ideal for stargazing. Every September and October are when Milky Way appears above the sky of Namtso Lake. Mars and Jupiter shine obviously at the far horizon in the west and they grow apart after July 1st.
Extra bonus: Sunset and sunrise are also stunning at Namtso Lake. 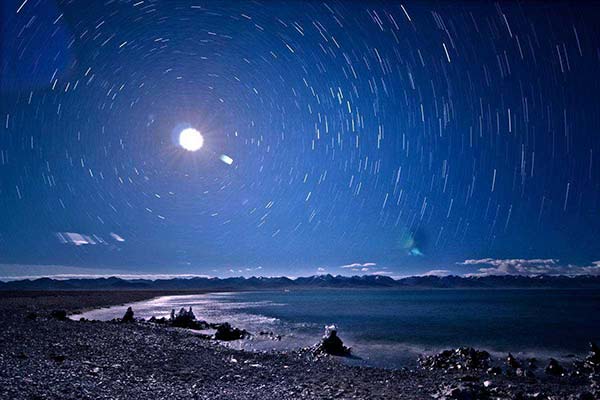 Namtso Lake
#2 Everest Base Camp
Introduction: Everest Base Camp is the place set up for travelers to have a close observation of Mount Everest in Tibet. Sitting at a height of 5,150 meters, it offers several outlooks to stargaze or take shots of night sky, Milky Way with the tallest peak. There are about 50 tent guesthouses available for those to stay overnight at E.B.C from May to October. Rongbuk Guesthouse, right across from Rongbuk Monastery is open to visitors all year round. Milky Way looks like a fall pouring down from the sky, with the companion of blankets of stars. Up into the sky, the dazzling stars glow in the perfect dark sky, which makes us feel like they are close enough to touch.

Shooting spots and times: April and May are the best times to photograph the night sky at E.B.C. Stars glow with different colors due to the different surface temperatures. The bluish stars have higher temperature and the reddish stars indicate lower temperatures. Milky Way is probably to be seen after midnight. 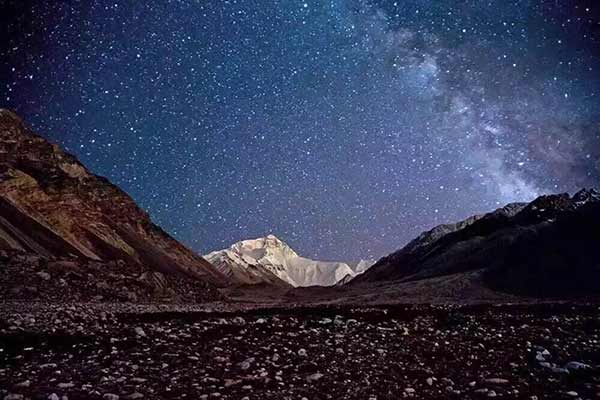 The region they belong to is the far west of Tibet, Ngari, which is believed as one of the world’s best stargazing spots. Ngari benefits from the great level of air transparency, high clear-sky occurrence rate, cloudless night sky and superb quality of astronomical seeing. Ngari has been selected as the site for China’s national level observatory and is rated equally important with Mauna Kea Hawaii and Atacama Desert Chile.

Shooting spots and times: Darchen(4,560m) is the town with the closest distance to Mount Kailash and Lake Manasarovar. There are many places in the vicinity of Darchen which are good to shoot stars. If you’re on a pilgrimage trekking around Mount Kailash, there are also temples and monasteries along the trekking tracks offering night walkers basic accommodation and board. Summer is the best time to stargaze in Ngari region.

Mount Kailash
#4 Dark Night Park Ngari
Introduction: Any spot in the Dark Night Park Ngari is suitable for stargazing all year round. Currently, the range of the Dark Night Reserve set around Ngari Observatory is about 2,500 sq. km. The park is made up of three regions: the Starry Night Experience Zone, Telescope Observation Zone and Tourist Service Centre. There are six telescopes and the types are folding telescopes and reflecting telescopes, providing a designated platform for stargazing and star photography.

Note on address and travel document: Dark Night Park is 25 kilometers south of Shiquanhe Town, the Government Seat of Ge’er County, Ngari. Since the park is at the national border area, travelers are required to have a Border Pass. While the domestic travelers can apply for Border Pass at the Security Bureau of their hometown or in Tibet, international travelers have to find a licensed local tour company to process the application.

Suggested tools and equipment for star photography
● Camera: a full-frame camera, with manual mode, is the minimum requirement.
● Tripod: helpful to maintain steadiness.
● Camera accessories: a wide angel lens, camera timer, UV filter、lens hood, waterproof and dust-resistant tools to protect the camera;
● Light torch: it gives you more freedom movement of your hands and also can be supplementary-lighting when needed.
● Warm clothing: nights in Tibet are sub-zero cold even in summer. Make sure to wrap yourself warm enough.

Tips for taking great shots of starry night
● Avoid the light pollution: to get as far away from cities and towns as possible.
● Avoid the times when there is still sunlight. The hour after sunset and the hour before sunset are both suitable for shooting.
● Choose manual focus when shooting night sky; And set the focusing ring on the infinity focus and then move it to and fro until the star spots seem sharp.
● Exposure combination recommendation: The shutter speed is better off to keep within one minute if the object is starry night or Milky Way; For star trail photography, the shutter speed can be minutes or even hours.