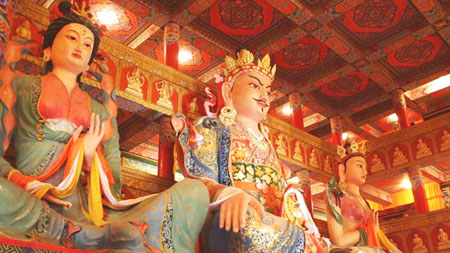 Songtsen Gampo (srong btsan sgam po). (569-650) or (617-650). Introduced Buddhism to Tibet. Founded Tubo line of kings. Always wears high orange or gold turban with small Amitabha Buddha head peeping out of the top. Chinese wife, Wencheng, always on viewer’s right. Nepalese wife, Tritsun, on viewer’s left.The king of Tibet in the seventh century Tibetan who prepared the way for transmission of the teachings. He is regarded as an incarnation of Avalokiteshvara. He married Bhrikuti of Nepal and Wen Cheng of China who each brought a sacred statue of Buddha Shakyamuni to Lhasa. Songtsen Gampo built the first Buddhist temples in Tibet, established a code of laws based on Dharma principles, and had his minister Thonmi Sambhota develop the Tibetan script. During his reign the translation of Buddhist texts into Tibetan began.
King Song Tsen Gampo took control of the kingdom at the age of thirteen and built Rasa Trulnang Tsuglag Kbang and Ramoche Tsuglag Khang two temples in Lhasa. He sent his minister Thonmi Sambhota to India to learn Sanskrit and writing, and as a result a Tibetan script was then modelled one of those current in India. He invited Acharya Kumara and Brahmin Shankara from India and the Nepalese Acharya Shilmanju, who began the propagation and translation of the Buddha's teachings. Although there was neither conspicuous nor extensive study of Buddhist doctrine, the king himself gave instructions to many fortunate people, mostly concerning the teachings of the Arya Avalokiteshvara.