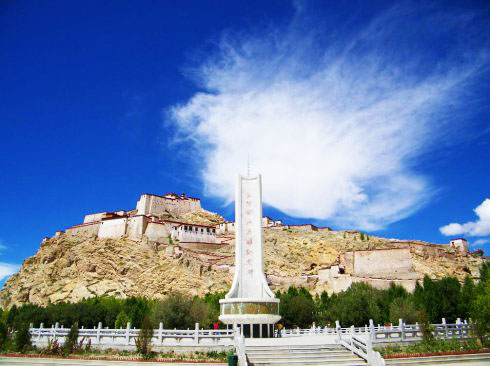 You could look from the Zongshan Castle at the city proper of Gyangze County in Shigaze, southwest China's Tibet Autonomous Region, Aug. 14, 2014. Gyangze's Zongshan Castle, a mountaintop fortress, was among the main battlefields during the British invasion of Tibet between December 1903 and September 1904. About 5,000 defending soldiers stationed in the castle fought for three days against the British troops but failed to withstand the attack, which began on July 6, 1906. Unwilling to surrender, the remaining soldiers chose to jump off the Zongshan mountain. Today, the Zongshan Castle has been turned into a tourist resort. Visitors can climb up to the mountaintop and have their photographs taken infront of cannons and the castle's crumbling walls.

Gyantse Dzong or Gyantse Fortress or Zongshan Castle is one of the best preserved dzongs in Tibet, perched high above the town of Gyantse on a huge spur of grey brown rock.

According to Vitali, the fortress was constructed in 1390 and guarded the southern approaches to the Tsangpo Valley and Lhasa.The town was surrounded by a wall 3 kilometres (1.9 mi) long.[4] The entrance is on the eastern side.