Tibetan Buddhism sects are distinguished because of its different Esoteric Buddhism they practiced and inherited. Tsozong Monastery is the Nyingma Sect and “Nyingma” refers to ancient and old. As for ancient, it mainly means that their Buddhism was inherited from the Padmasambhava who came to Tibet in the 8th century and hence its origin can be 300 years earlier than any other sects. For “old”, it probably refers to the Esoteric Buddhism classics they believed in and inherited were derived from the old mantras. In addition, the underground Tibetan culture is another feature of Nyingma sect, referring to that in the 8th or 9th century, people like Padmasambhava in order to hide Esoteric Buddhist classics in mountains to pass to posterity, they buried these in the ground or placed in the cave. After several hundred years, these classics would be excavated by posterity. In that islet where the Tsozong Monastery is located, there are various legends everywhere.

Tsozong Monastery is taken with obvious characteristics of Nyingma Sect, enshrined the major statue of Guru Rinpoche Padmasambhava which was self-constructed by a very famous collector of underground Tibetan culture. Apart from the major statue, there sure worshipped many other statues as well. In addition, there are some special murals here that differ from other monastery. On both sides of the walls in the monastery, there printed unique five kinds of gamic Buddha, male and female Guardian gods as well as the four kings’ figures. Due to its location surrounded by waters in four directions, Tsozong Monastery also became a temple that is against fire and water.

Reproductive worship is the most distinguished characteristics of the Tsozong Monastery. If you get there, you will see a male and female genital is placed on the left and right of the gate. It is an ancient Tibetan tradition of natural worship. In Tibetan areas, especially in Nyingchi area, the reproductive worship can be seen almost in everywhere, which the Moinba people call it “Karangxin”. There are a lot of legends relating to the reproductive worship around Tsozong Monastery such as the “praying for a baby hole”: on the rock mass that is about 1 meter-high is a female genital with clear and vivid image. What is more magical is that every 30 days or so, a kind of red mucus will discharge from that female genital, and that’s what local people call it the female menstrual. In the past, married barren women would all come here to pray for babies. Therefore, local people name it the “praying for a baby hole”. 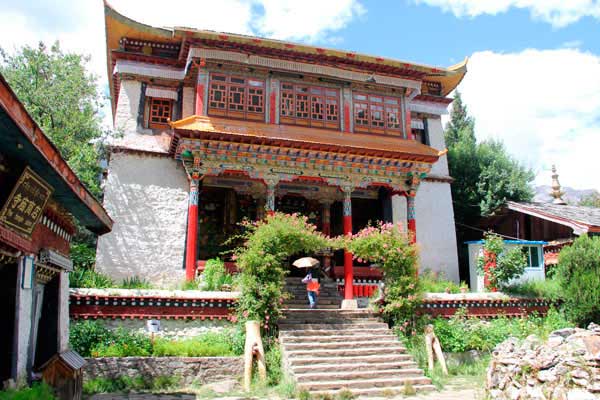 According to research, the fertility worship was originated from the Tibet maternal clan society when people worshipped female genital organs. With the development of Tibetan society, this gradually developed to the worship of coition and the genitalia of both men and women. However, only Tsodzong Monastery and Lama-mountain Monastery enshrined the genitalia in front of the gate. The two temples both belong to Nyingma Sect that is similar to the original religion of Tibet-the Bon Religion, which admired all natural things.