Namtso Lake located in the middle north part of Tibet, about 250km north of Lhasa city. It is the second largest lake in Tibet and the third largest saltwater lake in China. The rectangular-shaped lake is 4718 meters above sea level. 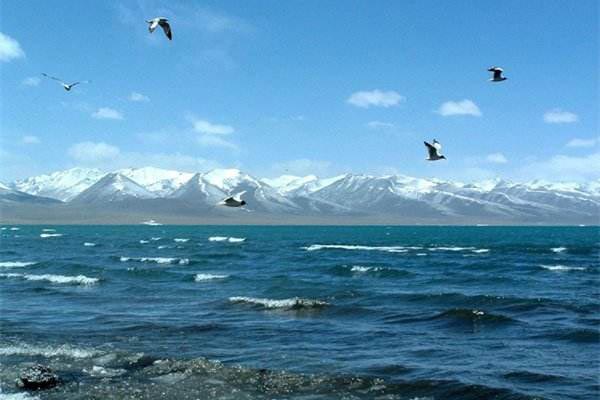 Namtso Lake
The formation of the lake owes to the activities of Himalaya Mountains and the glaciers. Nowadays, the surface of the lake is sinking and there are several ancient lines of the lake surface in the past, with the highest one about 80 meters off the present lake surface. In the north, there are continuous hills and in the south situated the major peak of Tanggula Mountains, which has an altitude of 7111 meters. The lake occupies a vast territory about 1900 square kilometers, with the deepest point about 33 meters. The water of Namtso Lake comes from the melted ice of the Tanggula Mountains and numerous streams around the lake. In the middle of the lake, there are 5 islets, among which the biggest one is about 1.2 square kilometers. Moreover, the lake has abundant kinds of creatures.

In Tibetan language the Namtso Lake means the "Heaven Lake". Namtso is one of the "three holy lakes" in Tibet. As the highest Lake in the world, the depth of the lake is maximum 120 meters. The holy lake attracts thousands of devoted believers doing the pilgrimage tour around the Namtso Lake especially when its year of goat according to Tibetan calender to get the blessings from the god.

The one way distance is about 250 kilometers from Lhasa to Namtso, and a mountain pass of 5150m lies on the way to Namtso. Because of the high altitude, you could feel the strong wind and low temperature here even in summer times. 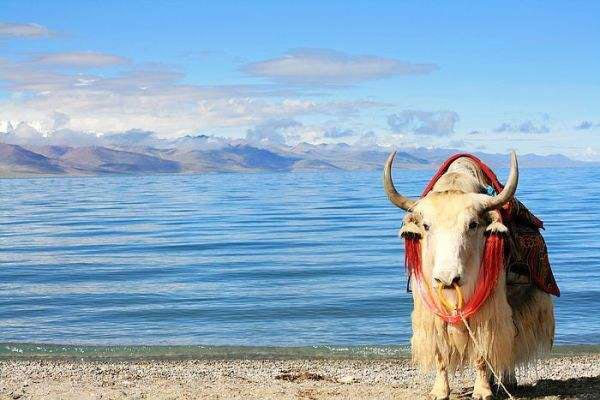 Tibetan Yak at Namtso Lake
Research shows the water level of the lake has risen at a rate of more than 20 centimeters a year from 2005, the reason is the lake water is basically snow-melted water from the Nyenchen Tanglha Mountains standing in the south of the lake, covered with ice and snow all year round. The water pouring into the lake through dozens of large and small rivers. Over the past few years, due to the greenhouse effect and global warming, the iceberg has been melting faster, while the Namtso lake has no outlet, resulting in the increase of lake water level. According to the beautiful legend that in ancient times, the Nyenchen Tanglha was "the God of the grassland", and the Namtso was the goddess of heaven lake. They raised a lot of cattle and sheep there and lived a quiet life in the pasture, guarding the creatures on the land.

But they accidentally offended the winter God who decided to beat them with a snowstorm. The young man bid farewell to his wife and went to search for the lost cattle and sheep in the storm.

Featured Stones at Namtso Lake
The creatures on the grasslands were destroyed by the snowstorm that lasted for more than a month finally died of hunger and cold. Nyenchen Tanglha got angry and fight with winter god for three days and three nights. Been thrown off the mountain. Nyenchen Tanglha lost in the fight and also lost his memories. He regained his memory after a long long time. But when he finally arrived home, he desperately found his beloved wife had turned herself into a lake of tears. The sad man transformed himself into Nyenchen Tanglha Mountain, and guarded around his wife day and night. There are two dependent stones on the lake side of Namtso, like lovers hugging each other.