The sky burial platform is usually made of a big rock or a stack of stones. After the body is placed upon the platform, the masters who host the funeral will start burning pine trees and fragrant herbs. Once the masters have summoned to the sky, a cluster of vultures who reside in the nearby area will rush down to the body. The masters cut the body into slices and smash the bones all by themselves; they feed the vultures and try to make them eat up the body remains.

Sky Burial Ceremony
When the funeral ends, it is time for the masters to find a place with water to clean faces and hands, have some food and then go back home. All the people who attend the funeral are forbidden to go to the home of the past ones. And all the food which is taken to the platform shall also not be taken back home.

Sky burial represents a unique Tibetan ethical custom, yet there are various versions about since when it became popular in Tibetan regions. Some believe that it originated from the period of the ancient seven kings of Tibet (gnam-gyi-khri-bdun), which is from around the fourth century B.C to the third century B.C, and that it has close relationship with the Bon religion. Another version says that sky burial can date back to the seventh century based on the deduction from Tibetan ancient tombs. Besides these two views, there are also people thinking the custom of sky burial was established by Zhigung Garyu Sect. at the beginning of the thirteenth century. 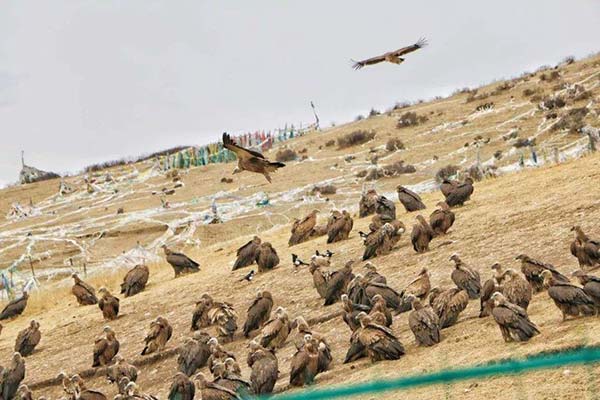 Vultures at Sky Burial Place
Although the sky burial in Tibet is a custom that is not easy to be comprehended by people living in the contemporary world, it does get people and nature closer and it is also a way to make the development between human and nature sustainable and balanced.