The once flourished Zhangmu Town

There was a beautiful mountain town at the end of China-Nepal Friendship Highway, which was also the largest land port between China and Nepal. A small town called Zhangmu built on the hillside lies in southern Tibet.

The surrounding environment’s very beautiful. Modern buildings and some old wooden structures alternately scatter on both sides of the highway. Unlike other Tibetan architecture, the buildings in Zhangmu Town are painted very colorful. The bright colors like red, yellow, green and blue, make this small town quite special and exotic.

On the way to Zhangmu Town, one side is high mountain, the other side is deep gorge. The journey on the narrow road would be full of tension and excitement. Occasionally you can see the streams rush down the gorge from the cliff, you could hear huge sound when the stream hit the ground. The water vapors in the air winds around. There are different kinds of plants on the wall of the gorge, completely different from scenery in other part of Tibet. 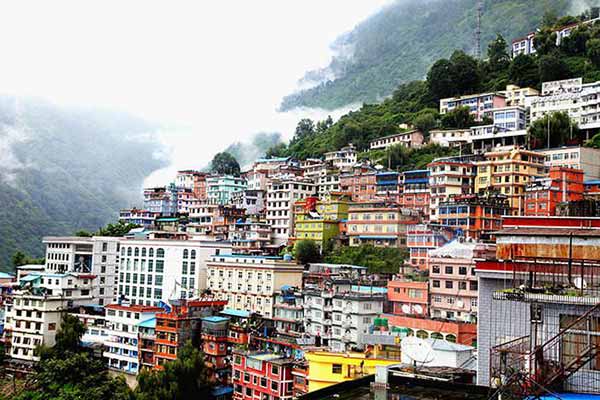 The distribution of vegetation from the semi-arid alpine meadow to the subtropical humid mountain forest, the difference in such a short distance, clearly displayed with the altitude change, it was a great wonder of nature.

Due to geographical constraints, there is no wide and smooth place in the mountain gorge. The whole town was built on the hillside, typically the style of mountain town. The only flat place in Zhangmu at the checkpoint is only enough to build a standard basketball court.

The whole town has only one highway that winds from the top of the mountain to the foot of the mountain. The road was only 5 or 6 meters wide, it requires excellent skills for 2 cars to pass. Because there were no parking lots, half of the streets were full of cars. As a result, the traffic jam was inevitable.

More than 1000 Sherpas in Tibet were mainly gathered here. Zhangmu Town had a permanent population of more than 3000 people, and more than 20 foreign trade and border trade companies.

It’s about 8km away from the Zhangmu Town to China-Nepal Friendship Bridge. The friendship bridge was built in 1964, about 8 meters wide and 45 meters long. It used to be the largest land access in Nepal. The red line between China and Nepal Friendship Bridge is the national boundary between China and Nepal. It’s also the end of the 318 National Road, which is known as the most beautiful landscape Avenue in China.

But everything changed since the big earthquake on 25th April, 2015. The 8 magnitude earthquake shocked the world. The epicenter was located in Pokhara, Nepal. The heavy intensity zone extends eastward from the epicenter.

Zhangmu Town in Tibet was also suffered great damage. Not only many casualties, but also 90% of the houses collapsed in the disaster. Meantime, the great damage of Zhangmu Town resulted in the closure of the China-Nepal border, which made the overland tour from Lhasa to Kathmandu impossible.

After the earthquake, the government permanently transferred all the residents out of the town, and the port was closed ever since. We used to think that everything in Zhangmu Town would back to track after repair. But from August 2017, the Gyirong Border reopens to all the tourists and already replaced the place of Zhangmu Town.

The beautiful Zhangmu town may become a legend forever.