Travel tip: UV protection is a must in Tibet 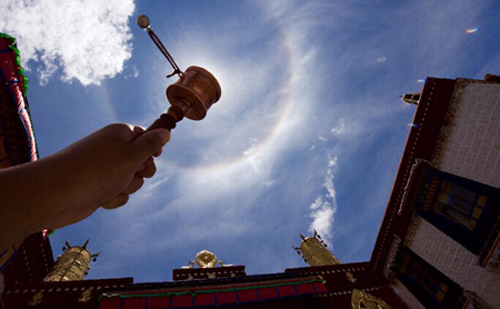 Recent data released by Tibet Meteorological Bureau indicates that, ultraviolet radiation in Lhasa, Lhoka, Shigatse, Chamdo, Ngari, Nagqu and other places in southwest China’s Tibet Autonomous Region has reached Level Five, which is considered strong. Experts advise tourists entering Tibet to take necessary protective measures.
Many of the attractions favored by tourists, such as the Yamzhog Yumco and Lake Namtso, are outdoors leaving tourists vulnerable to sun exposure. There have been cases where tourists have been sunburnt due to insufficient protection.
Experts suggest that tourists should use sunscreens of SPF 20+ /PA++ when entering Tibet and should avoid direct exposure to the sun. At the same time, tourists should also use other protective measures, such as scarves and hats, due to the limited screening effect of skincare products. Those allergic to ultraviolet light should consult a doctor and take necessary preventative measures.