Since 2008, travel to Tibet in March has continuously been unavailable due to the government policy. Now the change is on the corner after the absence for a decade. The latest news from Tibet authorities has informed that travel to Tibet in March for foreign tourists is now accessible, on the condition that foreign tourists travel within a group tour or private tour organized by a travel agency or tour operator and accompanied during the entire trip by a guide.

March in Tibet is still in dry season, while the rain season spans from May to September in most regions of Tibet. It still feels chilly, with an average highest temperature of 12℃ in the daytime, and the average lowest falls down to -2℃ at night. March is also in the wind season of Tibet which ranges from November to May. In conclusion, the weather has not come into the finest time, you may feel chilly and uncomfortable occasionally with the dry harsh wind. But don’t let this put you off for visiting Tibet in March, let’s have a look at what we can expect from this rarely known March of Tibet. 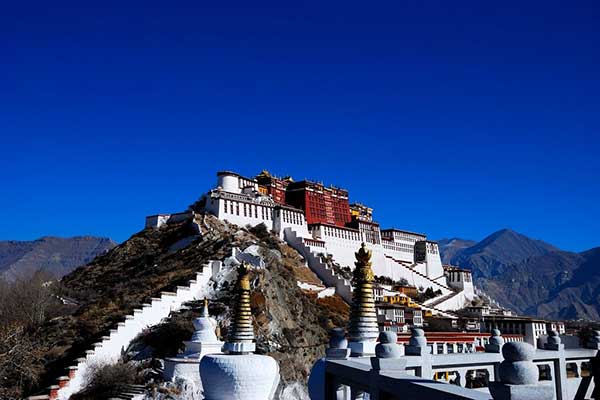 Travel to Nyingchi for Music and Nature

Festivities: The 17th Annual Nyingchi Peach Blossom Festival will be expected on the 23rd of March, 2019. It’s a young festival that started in 2002. Apart from the commonly shared festivities such as local specialties exhibitions and grand opening ceremonies, traditional celebrative customs and the blooming peach blossoms are the actual highlights.

Horse racing performance, arrow shooting and bonfire dancing are vivid representations that can make you feel how enthusiastic Tibetan people are, among which dancing is the most approachable for tourists. Wearing their beautiful traditional costumes, the local residents of Nyingchi welcome guests from all over the world with big smiles and invite them to join the bonfire dancing. They don’t really care about complicated dancing steps. Whether you are good at dancing or not doesn’t matter. Just dance as that old saying (do as the “Tibetan” do). The blazing firewood in the center would warm up your body. With the lowest altitude in Tibet, an average of 3100m, Nyingchi is altitude-friendly to new comers. Dancing or trekking requires less physicality for most people.

Flower visiting: Apart from Gala Village, where the peach blossom festival is held, Suosong village and Bome County are very suitable for flower sightseeing and photographing as well. Suosong Village is located halfway up a hill of Mount Namjarbawa, in the Yalung Tsangpo Grand Canyon Scenic Spot. You’ll watch the World’s deepest valley below your feet and have a unique photography angle. Bome County is famous for its 30km long peach blossom road. Driving along this road is believed to be one of the most beautiful road trips in the world.

Temperature: average temperature in the daytime is 10℃ and can fall below 0℃. 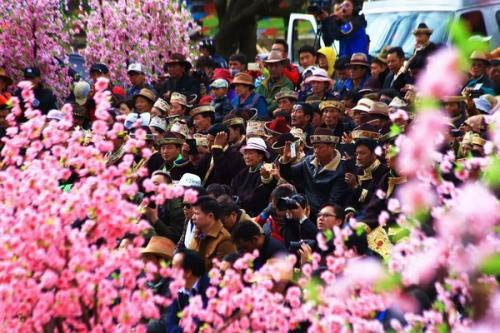 Travel to Lhasa and Shigatse for Culture

As the capital and the second largest city in Tibet Autonomous Region, Lhasa and Shigatse are not only famous for religious attractions such as the Potata Palace, Jokhang Temple, Tashilhunpo Monastery, but also with sophisticated tourism facilities and well-functional transportation system, which makes Lhasa and Shigatse best choices to travel for culture in a pleasant and comfortable way. That March is still in low season makes the absorbing of culture less stressful. You would not worry about getting in the way of the crowds behind you and won’t be ushered to just walk forwards without enough time to observe the Palace or monasteries carefully.

Accompanied by a local Tibetan guide who can speak good English and has grown up in the secular culture and religious culture environment, you’ll not only just do sightseeing, but also go on a culture and knowledge journey.

Clothing Tips: light down jacket and sweater. Sunglasses and sunscreen can protect your eyes and skin from strong ultraviolet. 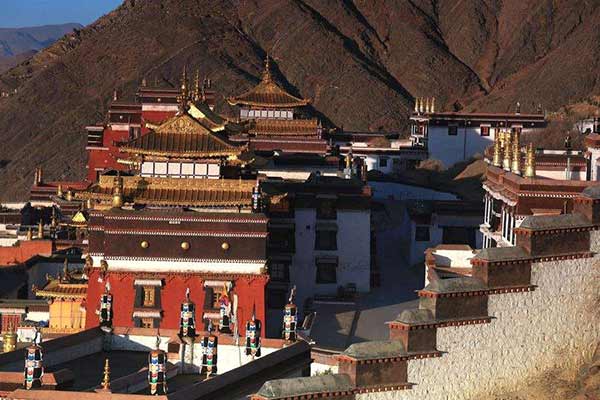 Travel for Relaxation and Communication

As now there are fewer gourmets in a same good restaurant, let’s take the time to enjoy the sweet tea, yak butter tea and Tibetan noodles, to have a typical relaxing Tibetan breakfast in the friendly atmosphere, where people sitting next to each other, without meeting before, can easily start a conversation beginning with a greeting.

Language will not be an obstacle for you to communicate with Tibetan people, given that your guide will keep you accompanied all day and can be a good interpreter. You may be surprised to find polyglots among them, especially the young Tibetans. In Tibetan schools, pupils study Tibetan, Chinese and English. Some Tibetan people are familiar with the neighboring countries’ languages too, such as Hindi and Nepalese.

Where in Tibet We Don’t Recommend Touring in March

Although Namtso Lake Scenic Spot is open all year round. Winter, usually from December to March, is a risky time to tour Namtso, mainly because of the closure of roads from Lhasa to Namtso due to the heavy snow. Most of the facilities in Tashi Island are closed during this period as well. Even when you finally arrive at the gate of Namtso Lake Scenic Spot, you may meet a polite “no” answer because the one hour drive ahead from the gate to the lakeshore is also often blocked by heavy snow and not safe enough to continue driving forwards.