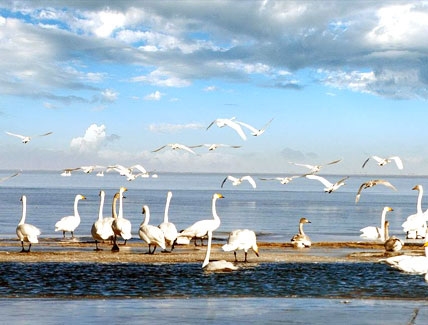 Apr - OctBest Time
MediumTour Pace
5190mMax Altitude
Physical Demands
Xining-Qinghai Lake-Golmud-Namtso-Lhasa
This unusual journey brings you from Qinghai province to Tibet. Besides the Tibetan monasteries along the way, you will have opportunities to enjoy the natural landscapes: snow-covered mountains, crystal clear highland lakes, grasslands, emerald-green forests, peculiar plants and rare wild animals in the Qinghai-Tibet plateau. This tour will make impression that China is so great!

Arrive in Xining today, then transfer to hotel, free time at your own disposal.

Have a visit to Ta’er Monastery, which is not only a center of Tibetan Buddhism in Qinghai, but also famous for Tibetan medicine as well as Tibetan art such as tangkha, barbola, yak-butter sculpture ,woodcarving and so on. Qinghai Lake is the largest salt-water lake in China cerulean water melts into the Azure ion distance where snowy mountains stand on grass. Overnight at Tent Hotel at lakeside, a good spot to watch sun-rise and sun-set.

April to July every year, thousands of thousands of migratory birds are home at Qinghai Lake, sky hovering, water swimming or sand walking in large groups with a thundering noise that is heard tens of miles away.

If lucky, one may behold a mirage, either on Gobi where dotted nomad tents, desert town and oasis, or on saline where crystal salt varies in forms of coral, pagoda, flower, ivory or anything one can imagine.

The altitude of the section is over 4500 meters, Crossing over Kunlun Mountain witnesses four seasons within one day. In a moment a sunny day will overcast and snow. One cheers up at the sight of agminate Tibet antelopes on vast unmanned area.

Nagqu grassland is between Tangglha Mountains and Gandis Mountains. One is deeply touched while looking back at Mt. Geladaindong (6559m) on a golden afternoon or forward at Mt. Nyainqentanglha (7114m), the holy mountain of all northern tribes on a rosy morning.

Today, drive on the vast Qiangtang Grassland for Namtso Lake. Cross the 5,150m Lhachen La Pass and reach the Namtso Lake, one of the three holy lakes in Tibet. The deep blue endless water makes you feel you are staying at the side of seashore. The sunset of the lake in good weather is extra bonus if staying one night at lake. Overnight at Namtso Lake.

In the morning, get up early and view the mighty sun rise of the holy heavenly lake, we people are too small. Stroll along the lakeshore and get a peace far from the city. Then drive back to Lhasa city, you may enjoy the Yampajain hot-spring (optional, self-paid) on the way back.

Today’s sightseeing starts from Lhasa's cardinal landmark-Potala Palace, a structure of massive portions. Its towering image already appearing on various occasions, but your first sight of the Potala will still be an awe-inspiring moment. It takes at least a good 2-hour to visit those rooms, halls and chapels. In the afternoon, we will drop a visit of the Jokhang Temple, the spiritual center of Tibet. Everyday, pilgrims from every corner of Tibet trek a long distance to the temple. The temple is the product of Han, Tibetan and Nepalese architectural techniques. Then we will visit Barkhor, the oldest street in a very traditional city in Tibet. Overnight in Lhasa.

Drepung Monastery is situated at the foothill of a mountain and was founded by Jamyang Choeje in 1416. It was once home of 10000 monks and Ganden podrang in Drepung is famous it was the government center during fifth Dalai lama and later moved to the famous Potala palace during fifth Dalai lama. In the afternoon explore the Sera Monastery which was founded in 1419 by Tsongkapa’s disciple Jamchen Choeje. The most attractive is that Monks debiting is held there in the courtyard at around 6-7:30 in the afternoon section. Overnight in Lhasa.
(Notice: the sequence of sightseeing of first two days may be adjusted according to the reservation of visiting Potala Palace).

What’s excluded in this tour package?
Chinese Visa fee
Tips for the guide and driver
Flight or train tickets into and out of Lhasa
Personal expenses such as laundry, drinks, fax, telephone calls, etc

A Private Tibet Tour Package means you will have your own private guide, driver, and vehicle for your own disposal. You don't have to share the vehicle with others even if you are a single traveler. You would have full attention of your guide and driver. Our professional guide would love to share local culture, knowledge and stories.
Your private guide would also help you make an easier, comfortable, flexible and enjoyable tour. You can stop on the road to get a rest or take pictures during the drive. You have the flexibility of changing the visiting order of attractions or extending the visiting time at some tourist sites.
When traveling with your family or friends, a private tour would be your first choice.
※Arrival Pick-up / Departure See-off
We will arrange the private airport or train station pick-up and see-off for you. Upon your arrival in Lhasa, you can find our guide waiting at the pick-up area, holding a name sign, welcome you with a warm smile. You will be transferred to hotel. Drink more water, get enough rest, take some time to acclimatize to the high altitude on the first day of your arrival.
※Accommodation Choices
For private tour, we can arrange hotels according to your requirements. There are options of budget guesthouse, 3 star hotel, 4 star hotel, high-end luxury hotel or bouquet heritage hotel. If you have your own preferred hotel, just let us know, we will help you with the booking, everything would be arranged as per your interests.
※Meal Choices
Our tour packages generally include breakfasts. Meanwhile, lunches and dinners are optional to be arranged either by yourself or by us.
It’s easy to find nice restaurants in Lhasa, and you could also ask for suggestions from your guide. They always know where you can find something tasty.
The price would be different according to different food:
1.      If you choose noodles, around RMB 10-15 per person.
2.      If you like some fast food like KFC, around RMB 20-35 per person.
3.      If you prefer some food at a decent restaurant, around RMB 50-70 per person.
4.      The local Tibetan hotpot, around RMB 80-100 per person. That is a really good one too!