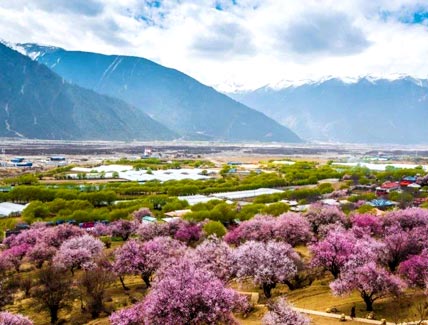 Jan - DecBest Time
LeisureTour Pace
5013mMax Altitude
Physical Demands
Lhasa / Nyingchi
Home of the recognizable beautiful Mt. Namjagbarwa and the holy lake for ancient Bon religion Basum-tso Lake, Nyingchi is attractive because of its nature and culture. And Lhasa, the holy land and city of sunlight, will welcome you with extraordinary culture feast and imposing architectural beauty of Tibetan’s palaces and monasteries. The two-day trip in Lhasa will give you a closer contact with the real life of Tibetan and their belief.

You will be greeted by your Tibetan guide once you arrive in Nyingchi Mainling Airport, then be escorted to your hotel in Bayi Town, the capital of Nyingchi Prefecture. Bayi, in Tibetan, means “the throne of the Sun”. Local Tibetans believe that this is where the Sun rises from. After hotel check in, you’ll have the rest of the day at your own disposal and we recommend that you have a good rest and drink more warm water to acclimatize the high altitude on the plateau. Overnight in Bayi.

After breakfast, your driver will take you to the junction of the two famous rivers Yarlung Tsangpo River and its tributary Nyang River. The early morning at the river is stunning. Twilight and thin fog float above, evergreen mountains are embraced by white clouds. Mt. Namjagbarwa [7787m], the fifteenth highest peak in the world, is standing still as if staring at the Mt. Gallas Base [7294m]. And next you’ll be taken to Mt. Segyi La, where you can also enjoy a panoramic view of Lulang Forest. Then drive 22km to Lulang Forest which locates at the eastern side of Mt. Segyi La. People praise Lulang Forest as Little Switzerland because its vast meadows, forests of fir and cypress and the clean streams all complete a painting that just resembles the amazing Switzerland. Overnight in Bayi.

Today you will be heading to Lhasa [3650m], while there is still plentiful time to visit Basum-tso Lake en route. It is the holy lake for the Nyingma Sect., which is also known as Red Sect. of Tibetan Buddhism because of the red color of the robes worn by the monks. It shapes like a crescent. Wild birds such as gulls, white cranes are living harmoniously in the lake. In the middle of the lake, there is a small ancient temple-Tsosong Temple. Tsosong, means “the castle in the lake” in Tibetan. Then continue driving to the west, you could stop at the Mila Mountain Pass [5013m], where Medro Gongkar is located, the birth place of King Songtsan Gambo. The scenery along the road from Nyingchi to Lhasa is a beauty of itself. Arrive at Lhasa in the late afternoon and have a good rest for the next day.

Today, you’ll have a tour to Lhasa's cardinal landmark and a UNESCO World Heritage Site-Potala Palace. Renowned as one of the great wonders on earth for its elaborate architecture built at an elevation of 3700m, this awe-inspiring palace will not disappoint you. In the afternoon, pay a visit to Jokhang Temple, the most respected shrine in Tibet. Thick with the smell of incense and yak butter, you’ll witness a throng of prostrating pilgrims cramming out there. The temple is the masterpiece of Tibetan, Chinese and Nepalese architectural techniques. Then take a stroll around the Barkhor Street, the oldest bazaar in the city. You'll also enjoy a welcome dinner gathering with all travel mates in the group after the sightseeing activities. Overnight in Lhasa.

Morning, you’ll visit Drepung Monastery, which locates about 8km west of central Lhasa and was once one of the world's largest monasteries with the population of around 10,000 monks in its heyday. Climb uphill through the whitewashed intersecting alleyways as well as the medieval chapels, and enjoy the panoramic view of the city on top of the mountain. In the afternoon, you’ll have a chance to witness the famous 'Scriptures Debating' session at Sera Monastery, spectating their featured way of Buddhist dialectics and hand slapping in a landscaped courtyard with lush trees. Overnight in Lhasa.

Today, your guide and driver will be on time to transfer you to the airport / train station. Thanks for traveling with us. Hope to be at your service next time.

It’s easy to find nice restaurants in China, and you could also ask for suggestions from your guide. They always know where you can find something tasty.