Tibet Airlines officially adopted summer season flight schedule from March 31. Tibet Airlines has made a large-scale adjustment on the basis of the original route layout in the new season. 18 new flight routes were added including Lhasa-Mianyang-Hangzhou, Lhasa-Lanzhou-Taiyuan, Lhasa-Jinan, etc.

In addition, from April 8, Tibet Airlines also opens its first intercontinental route, Jinan-Helsinki. Meanwhile, another direct route from North China to Lhasa, Jinan-Lhasa is put into use as well at the same time. 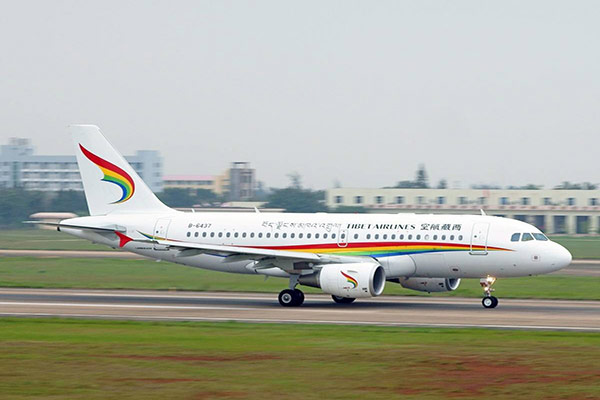 After the implementation of the summer season flight schedule, the total routes of Tibet Airlines has reached 58, including 30 routes in high altitude region, 23 routes in plain region and 4 international air routes, covering the vast majority provinces and cities providing aid to Tibet. According to reports, Tibet tourism will gradually enter the peak season from April and Tibet Airlines will continue to increase its capacity to invest in the operation of Tibetan-related flight routes including Chengdu-Lhasa, Xi'an-Lhasa and Beijing-Lhasa correspondingly.

In order to build the "North Passage to Tibet", flight routes including Xi'an-Shigatse, Xi'an-Nyingchi, Lhasa-Nanchong-Shenyang and Lhasa-Yinchuan-Shenyang will be opened. At the same time, the newly opened direct routes from East China to Tibet including Lhasa-Mianyang-Hangzhou and Changdu-Chengdu-Shenzhen provide greater transportation support for Tibet.

A stewardesses from Tibet Airlines

It is understood that the Jinan-Helsinki route opened on April 8 is also considered as a milestone of the business expansion of Tibet airlines. The intercontinental flight route is scheduled on every Monday and Thursday.

As the flight route connecting China and Finland running by a domestic air company, Airbus A330 wide-body airliner will be used. The flight cabin is equipped with the most advanced EX3 AVOD entertainment system. The spacious space and safer airborne equipment will bring a safer and more comfortable experience for a long-range flight.

The situation that passengers in Jinan area had to transit through other cities and that it took more than ten hours to arrive Finland will be changed with the opening of the route, which will shorten the flight duration time between the two places to less than ten hours.