This newly opened route is the first direct flight into Tibet in Hubei province, which takes about 3.5 hours one-way. There is one flight in and out of Tibet every day.

As a counterpart assistance city, more and more people travel into and out Tibet from Wuhan for business and tourism needs in recent years.

In the past, when people in Wuhan or neighboring area who would like to go to Tibet, they have to take a stop or transfer flight in other cities like Chengdu or Chongqing, around 7 hours would be needed for this trip to Tibet. 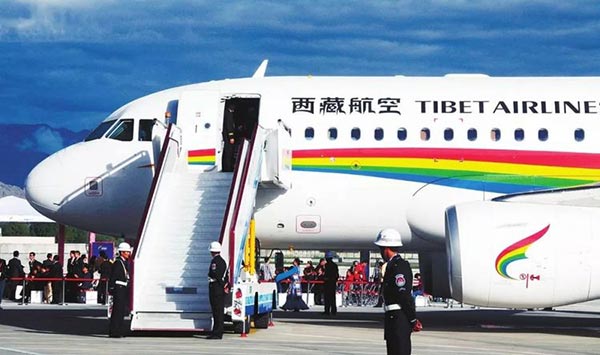 If they have to be in Lhasa in the morning, then the tourists would have to stay overnight in Chengdu or Chongqing before they fly into Lhasa so that they could directly head to the airport early in the morning.

Without direct flight, traveling to Tibet definitely lead to higher cost on both time and money. Including the cost for the transfer, the one way trip to Tibet would cost more than 1500 RMB. So Tibet Airlines Lhasa's direct flight to Wuhan will greatly shorten the flight time and save more on the cost.

Besides this newly opened route, there are other cities from Chengdu, Chongqing, Beijing, Shanghai, Guangzhou, Xi'an, Xining, Kunming and Diqing to Lhasa. So the trip to Tibet is getting easier and more convenient.

The specific flight numbers are listed as below:

In addition to fly into Tibet, you can also choose trains into Tibet or overland tour to Tibet.

The train going up and down when it passing the Qinghai-Tibet Plateau, this is a splendid experience when you having a cup of hot tea and watching the snow mountain, the grazing yaks, clear streams and the blue lakes. You also got a big chance to see the rare animal-Tibetan antelope.

For many people, this train ride is also a great highlight of Tibet's trip. Therefore, the train into Tibet gets more and more popular and the tickets were like gold dust.

Generally speaking, train tickets can be booked one month before your trip, if you want a train into Tibet, or want to have an overland tour to Tibet (at present, you could take the overland tour from Sichuan, Yunnan, Xi’ning and Xinjiang into Tibet). Please feel free to contact us in advance for more details and quotation.