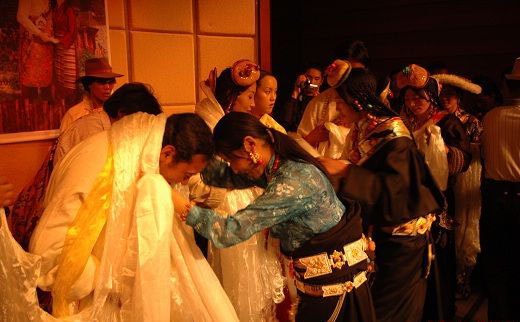 It is popular in Shigatse of Tibet. Zanba is a kind of flour made of wheat barley and peas, a staple food for Tibetans, which is considered auspicious. As guests are leaving, a host will pinch a bit of zanba onto their shoulders, and wish a happy family and all the best. During traditional new year or festivals of great importance, Tibetans will sprinkle zanba onto each others’ shoulders to congratulate.

To seriously take an oath is a tradition of Tibetan. An ancient book of Tang Dynasty depicted the contents of an oath make by Tu Shan Tsanpo (King) who took an oath with his ministers, using a sheep, a dog, and a macaque as sacrifices to cut their legs before the King, then splitting their intestines and ordered some wizard to declare to the deities of the sun, the moon and stars that all deities judged who would have the same consequence like the sheep if breaking the oath. Today, Tibetan has taken an oath seriously as before. To swear has two kinds, one is to swear by words, another one is to swear by hands.

To take an oath by words is to make oath orally and to make an oath by hands it to make the oath by using gestures or objects. In Tibet, people usually swear when they make friends, demonstrate the innocence, decide to keep secrets, meditate disputes and confide in a belief. Oral oath generally is that “Gong jue song” means the swear is made under the fame of Triratna; “Qiao ren bu” means the swear is made by the fame of Buddha Sakyamuni. In addition, some oaths are made by the fame of local land and deities, some are made by the fame of parents and children. Oaths of the latters are very burdened ones because their relatives are put into the oath, and not only the person but the relatives will be impaired if one breaks the swear.

It is complicated in taking an oath by gestures that is generally finished through religious ritual, for instance, to take an oath by putting a Buddhism scripture on one’s head, knelt to Buddha sculpture, main Buddhia sculpture or living Buddha.

Tibetan cares a lot about using respect terms addressing others. In central areas of Lhasa, Shigatse and Shannan, word of respect is commonly observed, especially, respect terms in Lhasa featured as refined, courteous, melodious and respectful, with peaking order and different seniorities. People who are not able to use respect work are regarded as impolite and people who use respect terms mistakenly will make a fool of himself. When addressing a person the honorific suffix-la is added after the person’s name to show respect. For instance, Ge Sang is called Ge Sang La, Tshi is called Tshi La; the teacher called Ge la and the cook is called Ma-qin la, etc.

Tibetan greatly values presenting gifts that must be presented on the occasions of festivals or ceremonies. The receivers often send gifts in return for the presentation, which are usually more than given ones in numbers. Otherwise, it is regarded as a breach of etiquette.

Etiquette of children to parents

In family, children must respect their parents. They must follow parents’ words obediently even if their words are not all correct. Not to mention contradicting.

Children must stand by and greet parents and the elderly when they are back home, and help them place the belongings, like hat, shoes, and prepare tea, wine for them warmly. All these are required to be done with politeness and courteous.

It is not allowed that children should interrupt while parents are talking with their guests.

It is not allowed that children should sit in their parents’ seats even they are not in.

Etiquette in meeting with guests

Tibetan are quite hospitable even a stranger who have required can be treated with tea, drinks and Zanba. A host will walk out to greet guests, with a bow and both hands at the same level, to welcome when guests arrive. And the host keeps standing by till they get into the house. Family members then stand up to have all guests seated as men at left and women right. The host will take out the finest beverage cup, and fill it with tea or drink. Guests are not allowed to hold up the cups and drink right away, but should dip the ring finger into the drink and flick it up three times before drinking, which is a ritual memory for Triratna, namely the Buddha, the Dharma, the Sangha.

As a guest presents gifts to a host, he or she receives them politely with both hands.

Presentation of gifts is quite particular too. Family members stand up as guests are leaving. Gifts presented by a host are usually not taken away by guests. Instead the host wraps up the gifts and take them outside to the guests.

Seeing off a guest with different etiquettes: has several ways: one day of accompanying is the top etiquette. The second is seeing guests off to out of sight. The third is sending guests to gate or outside of the gate.

Etiquette between the teacher and students

“Teacher” is a very sacred title, who enjoys a leading social status in Tibet. Those who contributed greatly to society, with rich knowledge, good moral and prestige are generally regarded as “teachers”.

One shall take off hat, hold it in front of his chest and then bow to him/ her with greeting in a polite way when meets a teacher. One shall step aside to let the teacher walk first.

Open curtains before a teacher comes in.

Etiquette between the senior and the junior

Tibetan values most about the etiquette between the senior and the junior. Respecting the elderly and caring for the young is a valuable tradition of Tibet since ancient time.

No matter in the family or on any social occasion, one should strictly follow the rule of senior priority that the senior walks first, be seated first and in a high seat, talk first, eats and drinks first.

The junior must completely follow the senior’s words. As an ancient percept goes that the senior’s teaching is more valuable than gold.

It is necessary for the junior to talk in a respect tongue with the senior, and can’t call their names directly. When a senior is going to talk to a junior, in no where, the junior shouldn’t pretend to avoid it but reply to one patiently, can not even lie.

As the senior come to one’s family, all family members need to stand up till the senior is seated.

Related articles
Do's & Don'ts We list some Tibetan Taboos to show you how to have proper behavior while traveling in Tibet.
Wind Horse Flags-Prayer in the Wind The prayer banner written with the scripture text “wind horse” is said to be the earliest text appeared on the flag in the temple of Kagyu Sect. Tibetan Buddhism urges its believers to circularly and constantly recite mantra from scriptures, especially the six proverb words, since these six words are regarded as the root of all the classics.
General Tibetan Customs Introduction of Tibet local customs and traditions on languages, greetings, and diet habits, etc.
Sky Burial Custom in Tibet Celestial burial, popularly known as “sky burial”, is a funeral practice in which a human corpse is placed on a mountaintop to decompose while exposed to the elements or to be eaten by scavenging animals, especially carrion birds.
Mani Stones in Tibet If you travel to Tibet, you will see a special kind of sacrificial altar that is piled up with lots of stones-Mani Stones, also known as the “holy heap.” “Mani” is the shorter form of one of the mantras of the Sanskrit scriptures.
Tibetan Dwelling Customs and Etiquette The diversity of Tibetan residential customs is not only manifested by the buildings of square shape and stone structure but also the more abundant types caused by different regions.