If you travel to Tibet, you will see a special kind of sacrificial altar that is piled up with lots of stones-Mani Stones, also known as the “holy heap.” “Mani” is the shorter form of one of the mantras of the Sanskrit scriptures. The stone that piled up the altar is called “Mani stone” for it has engraved “Mani” on it. Tibetans describe the firm and unchanging heart as “patterns that carved on stones” and believe that what is cut on the stones will be permanently retained such as Gesar’s footprints, horse hoot prints as well as footprints of historical celebrities. Tibetan people work hard to inscribe pieces of stones with scriptures and a variety of Buddha’s images together with auspicious patterns and decorate them with color, making these ordinary stones into Mani stones. Devout Tibetan believers have faith in that as long as they consistently cut the six words Mantra they mediated day and night onto the stones, the stones will have a supernatural spirit, bringing them good luck. 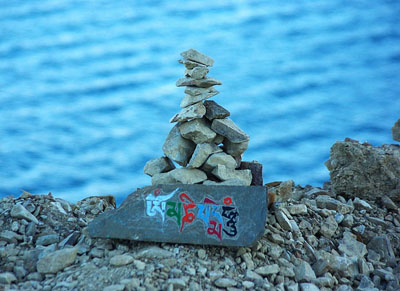 Unlike the skull bowl, Mani Stones emerged in Tibet before the introduction of Buddhism, has something to do with the Tibetan primitive religion-Bon religion. Generally speaking, Mani Stones are heaped up by stones in different sizes, rams horn, ox horn, or even the entire yak skull where inserted some branches in it with colored prayer flags in blue, white, red, yellow and green hanging on. Some of the Mani Stones will have ropes pulled out from the top to a tree or a cliff on its side and hung prayer flags or ox hair or wool fabric on the ropes. Mani Stones are usually of various sizes and heights with two kinds of square stage and round stage can be seen everywhere in Tibet. It is suggested to move clockwise around the Mani Stones, hymning or reciting scriptures meanwhile and add a stone, a bone, a cloth, wools or hairs to it as you pass by accidentally.

There are always not only some ordinary stones piled in the Mani Stones but also flagstones carved with scriptures or Buddha, which are generally considered as to preach the doctrines of Buddhism. In fact, the Mani Stones bears much more meanings than that. Mani Stones owned a very long history in Tibet, originated from the primitive worship of nature, is a product of the original Bon Religion. After the introduction of Buddhism, there existed dispute between Buddhism and Bon Religion together with the combination of the two. Thereupon, both the connotation and external form of the Mani Stones was infiltrated with contents of Buddhism while the fundamental implication of it falls on deities instead of Buddha. To sum up, it can put like this that Mani Stones is a product of ideas and feelings of Tibetan nationality, which changed the abstract to the concrete, the invisible to the visible and disorderly world without shape into a form of significance at the time as well. Cooperated with Tibetans’ minds and functioned as a common compliance, Mani Stones safeguarded the common order of Tibetan society. 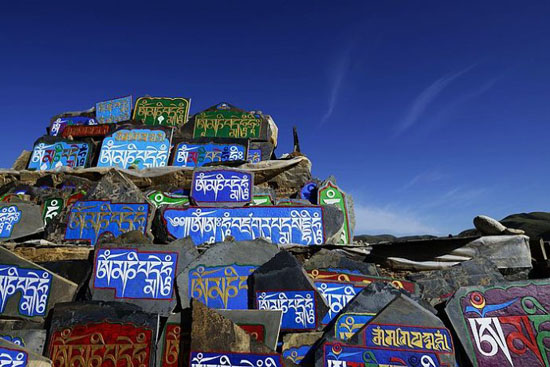 No matter the Mani Stones, the stones wall or the cliff sculptures, they are all existed as a kind of landmark or guidepost, set at mountain passes of pilgrimage, crossings or turnings on the way of traveling. In terms of practical significance, the Mani Stones can indicate the direction of advance for passers-by and mark routes, which is particularly important in this sparsely populated plateau with vast territory. In addition to several major traffic arteries, there actually lack true roads within vast Tibetan areas. Tibetans neither use carts and wagons since ancient times nor construct many roads hence they usually just rely on their legs to trek or ride a horse instead of walking. Therefore, a bunch of stones toward the top of the hill and to the sky will emerge one after another once you are in some districts without visible roads there. These rubbles are exactly piled up by walkers with pieces of stones through months and years. 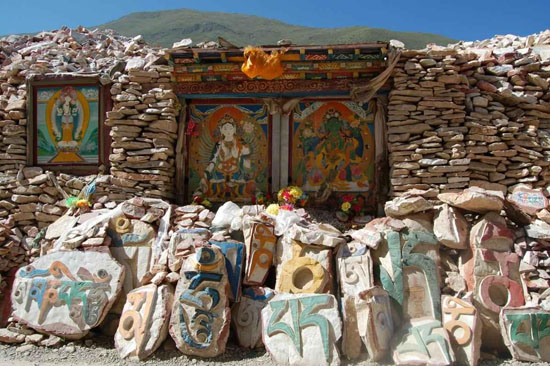 The Mani Stones accumulated over hundreds of years around the Zhonge Temple, Nagqu County of Tibet is the largest Mani Stones within Tibetan territory, with its scale quite large and having accumulated more than 200 million stones. The Mani Stones there was built by the accumulation of bright-colored stones in assorted shapes. Moreover, the texture of Mani stones varies as well including limestone, white marbles, and siliceous rocks etc. Without doubt, Mani Stones with such a scale did not exist at the beginning time but formed throughout years. According to the Tibetan tradition, every time they pass by Mani Stones, they will throw a stone to the heap, chanting scriptures as they turn a circle around it. In this way, the scale of the Mani Stones gets increasingly large after a long-term of people continuously adding stones to it.

Related articles
Etiquettes in Tibet Learn some Tibetan Etiquettes and Taboos before traveling to Tibet, to understand and respect their culture during your trip.
Do's & Don'ts We list some Tibetan Taboos to show you how to have proper behavior while traveling in Tibet.
Wind Horse Flags-Prayer in the Wind The prayer banner written with the scripture text “wind horse” is said to be the earliest text appeared on the flag in the temple of Kagyu Sect. Tibetan Buddhism urges its believers to circularly and constantly recite mantra from scriptures, especially the six proverb words, since these six words are regarded as the root of all the classics.
General Tibetan Customs Introduction of Tibet local customs and traditions on languages, greetings, and diet habits, etc.
Sky Burial Custom in Tibet Celestial burial, popularly known as “sky burial”, is a funeral practice in which a human corpse is placed on a mountaintop to decompose while exposed to the elements or to be eaten by scavenging animals, especially carrion birds.
Tibetan Dwelling Customs and Etiquette The diversity of Tibetan residential customs is not only manifested by the buildings of square shape and stone structure but also the more abundant types caused by different regions.