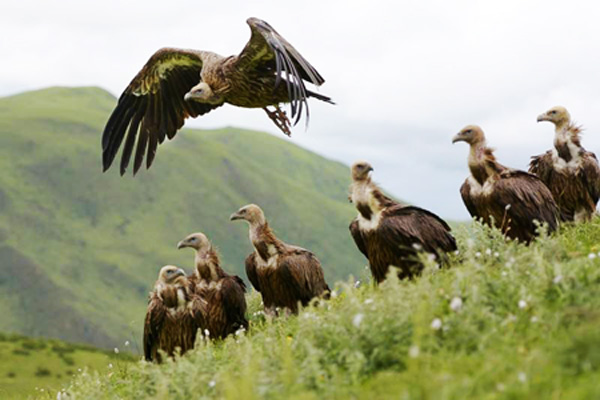 Celestial burial is popularly known as “sky burial”. There are two different explanations about the origin of the celestial burial. One says it is purely native; while another says it came from India or Central Asia. However it is generally recognized that its evolvement has gone through two phases. The first one is the period of so-called aboriginal celestial burial, when people unconsciously left the dead body in the wild. Till the period between 11th and 12th century, influenced by the Buddhist doctrines, the celestial burial had gradually started with rituals, hence started the period of so-termed ritualized celestial burial. Since then the rituals have become all the more regularized. Now it is predominantly the most prevailing funeral practice among all in Tibet.

A complete set of funeral procedures should start while the person’s life still lingers. The family members would feed the dying person with a tablet made of rare Tibetan herbs mixed with burnt ashes of the drapery, hair and nails of Living Buddhas, which is said to be able to help the dying people cut off some intrinsic qi, i.e. The human appetites, and let the soul leave peacefully. Meanwhile Lamas would be commissioned to chant scripture, so as to help the dying person to get rid of anguish and fear at the last moments. Notably the ladies and children generally are not allowed to approach the dying person, because it is said that will disturb his mood and influence his smooth transmigration.

As soon as the person dies, a piece of white cloth will be used to cover his face, and nobody is allowed to touch or move the dead body from then on. At the same time, Lamas will be commissioned to hold a ceremony called Paowa, that is said to help the soul’s exodus from the skull and rise to heaven, instead of expelling it from the asshole and falling to hell.

During the funeral preparation period, a pottery jar will be hung on the doorway of the dead person’s home as a sign of mourning. Meanwhile some cypress branches will be burned in the jar, adding in some tsampa, cattle or sheep’s blood, meat and fat, as well as the milk, cheese and butterfat, a way of serving meals to the dead. Throughout this period, all friends, relatives and neighbors shall not sing, dance or make any fun. Cats, dogs, and other livestock are to be strictly kept away from the dead body.

Wizards are also commissioned to divine and select appropriate time of the funeral, which is usually at 4 or 5 o’clock in the early morning on the fourth or fifth day after the time of death. The body is bent into a shape like a fetus in pregnancy, with his arms and legs being bound together. The body, covered with a white tweed, will be carried on the back of a family member, and moved towards the funeral yard for a certain distance, and then be handed over to a professional body carrier, but by no means will it be placed on the earth on the way, or else the soul of the dead will wander about there.

On arriving, people will burn bunches of cypress branches to notify the divine vultures. The rising smoke summons the vultures flocking there. Now the celestial burial master begins to cut apart the corpse. He will incise it from its back, take out the bowels, separate the muscle from the bones, and crush the skeleton with stone, then mix this with tsampa. Then the master will first feed the vultures with the bowels, then with the bones and at last with the meats. If t vultures eat all with nothing remaining, it means the dead had not committed any sin while living, and his soul will be guided to “heaven”. If white vultures eat first, it is regarded as the most auspicious sign; while if the vultures eat nothing or eat only a part, then the remains will be burned, and the ashes will be spread over. In this case, the family members should commission monks to chant scripture, and release the soul from the purgatory. Afterwards, the deputies of the family will treat the master with meat and wine. Yet within certain period of time, the master is not allowed to visit the family of the dead to avoid taking the soul back his home.

However, the rules for sky burial masters vary greatly with places. The above-said is that of the area near Lhasa.

P.S. there are two famous sites for sky burial on Tibet Plateau. One is Larung Gar Buddhist Academy, situated in Seda County, Garze Tibetan Autonomous Prefecture (lies in the region of Kham of the Tibetan Plateau back to history). It’s one of the largest Tibetan Buddhism institutes worldwide, housing more than 20 thousand monks and nuns.

Another renowned site is at Drigung Til Monastery. This monastery is on a long mountain ridge with an elevation of 4465 meters, about 150km northeast of Lhasa city, short distance to Tidrum Nunnery and its well-known hot spring. It’s also regarded to have the best sky burial ceremony in central Tibet.

Related articles
Etiquettes in Tibet Learn some Tibetan Etiquettes and Taboos before traveling to Tibet, to understand and respect their culture during your trip.
Do's & Don'ts We list some Tibetan Taboos to show you how to have proper behavior while traveling in Tibet.
Wind Horse Flags-Prayer in the Wind The prayer banner written with the scripture text “wind horse” is said to be the earliest text appeared on the flag in the temple of Kagyu Sect. Tibetan Buddhism urges its believers to circularly and constantly recite mantra from scriptures, especially the six proverb words, since these six words are regarded as the root of all the classics.
General Tibetan Customs Introduction of Tibet local customs and traditions on languages, greetings, and diet habits, etc.
Mani Stones in Tibet If you travel to Tibet, you will see a special kind of sacrificial altar that is piled up with lots of stones-Mani Stones, also known as the “holy heap.” “Mani” is the shorter form of one of the mantras of the Sanskrit scriptures.
Tibetan Dwelling Customs and Etiquette The diversity of Tibetan residential customs is not only manifested by the buildings of square shape and stone structure but also the more abundant types caused by different regions.