There are about four forms of marriage in Tibet mainly dominated by monogamy which is prevalent and most prominent in the cities and towns of Tibet. The second form of Tibetan marriage polygyny sounds kind of special seen from outsiders. This form of marriage is mainly popular with serf owners or wealthy family of the serf society, still existing in some ordinary families, but most of which is sisters marry one husband. Followed by the polygyny is the form of polyandry, usually brothers or friends marrying one wife. This form, to some degrees, attributes to the economy, with female as the family center. The habit of farming and pastoral areas is that the wife occupies one room, and husbands cohabit with the wife in turn, with the order is the elder first followed the younger. If the husband is going to have sexual intercourse with the wife, he has to leave his shoelace out of the door so that if other husbands see will avoid stepping in. Hence, they are seldom at odds for such things. Thereinto, father and son marrying the same wife always presents in the condition that the mother is dead and the father and the son marry a younger woman who later becomes the stepmother and also wife of the son. On the other hand, mother and daughter marrying one husband exists in the situation that the widow remarriage with her daughter. After the daughter’s adulthood, she cohabits with her stepfather. The fourth form of marriage is that among Tibetan Buddhist, apart from the Glug Sect, monks of other sects are not prohibited to marry or have their own children. Instead, the monk is able to freely choose who will become his wife. However, the wedding ceremony usually held very simply, just a religious ceremony in the temple. 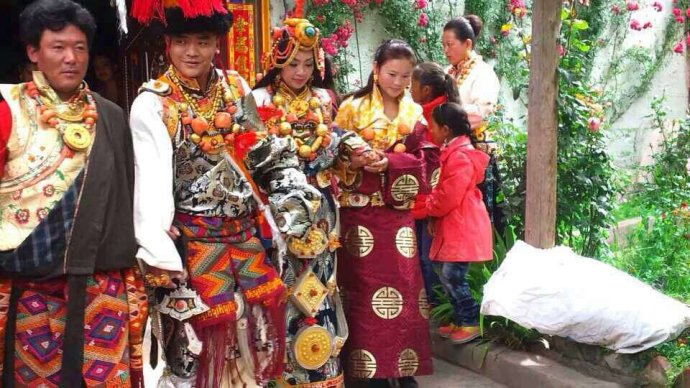 The custom of long-standing polygamy in Tibet can be said to be the relics of ancient communal marriage. The economy is the underlying factor that makes this ancient form of marriage surviving till today. In Chamdo of Tibet, people in some areas encourage polygamy in order to safeguard the ancient “pacuo” kindred system. The pacuo system is a kind of clan force bond by patrilineal consanguine, hence people pay particular attention to the male birth which is closely related with the expansion of the pacuo force. Only if the pacuo force is expanded will the financial resources kept within safety. As a result, the husband desperately asks his wife to bear male babies. If the first wife cannot achieve this goal, the husband will marry another until he has his boys. Thus, there appeared the polygamy family in Tibet. Due to this fertility purpose, women here are only seen as a tool for childbearing without any family status and social status. Besides, compared with women bearing female babies, those who conceive male babies are of higher status. What’s more, before the year of 1951, the way of levying taxes and duty of corves is accordance with the number of households. Polygamy family can not only avoid the dispersion of property but also reduce family burden.
In addition, marriage procedures and customs also differ in different areas in Tibet. But in ordinary circumstances, Tibetan marriage will go through the following steps: when you find a spouse, you must know his or her animal sign, age and birthdate. Then request divination from living Buddha. If the two persons’ animal signs are coincident, the man should make a formal proposal to the woman, taking with presents like Hada, tea and wine etc. to the bride’s family. If the woman agrees, she should receive the gifts and then turn back a Hada to the man. 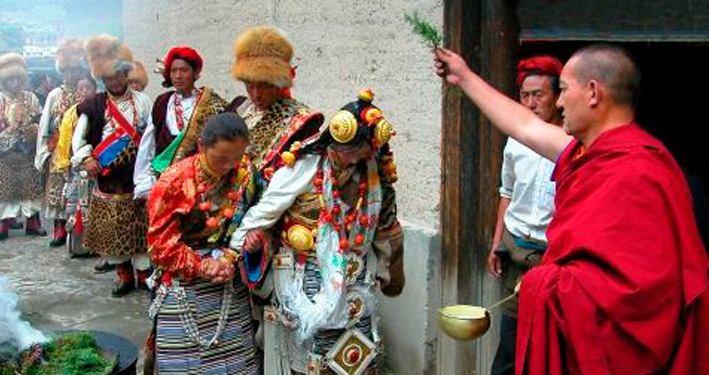 The day before the wedding, the groom need to send a set of attracting clothing to the woman’s house for the bride to dress. On the wedding day, the groom will pull a pregnant and dressed-up mare coincided with the bride’s animal sign for her to ride. On the male part, the groom should present a bucket of water to neighborhoods adjacent. Beside the last bucket, the host of the male family should place numerous teabags for the bride to drink, in order to bless their new happy life. After the bride’s arrival, her companions will put each barrel a Hada to express their gratitude. Later, the bride will live in the groom’s family for one to three days and return while in some areas, the bride will get to the groom’s house and start matrimony after several months.

Related articles
Etiquettes in Tibet Learn some Tibetan Etiquettes and Taboos before traveling to Tibet, to understand and respect their culture during your trip.
Do's & Don'ts We list some Tibetan Taboos to show you how to have proper behavior while traveling in Tibet.
Wind Horse Flags-Prayer in the Wind The prayer banner written with the scripture text “wind horse” is said to be the earliest text appeared on the flag in the temple of Kagyu Sect. Tibetan Buddhism urges its believers to circularly and constantly recite mantra from scriptures, especially the six proverb words, since these six words are regarded as the root of all the classics.
General Tibetan Customs Introduction of Tibet local customs and traditions on languages, greetings, and diet habits, etc.
Sky Burial Custom in Tibet Celestial burial, popularly known as “sky burial”, is a funeral practice in which a human corpse is placed on a mountaintop to decompose while exposed to the elements or to be eaten by scavenging animals, especially carrion birds.
Mani Stones in Tibet If you travel to Tibet, you will see a special kind of sacrificial altar that is piled up with lots of stones-Mani Stones, also known as the “holy heap.” “Mani” is the shorter form of one of the mantras of the Sanskrit scriptures.