Tibetan people are religious, you could see them doing the pilgrimage tour by prostrating themselves on the ground no matter at Barkhor Street or around Potala Palace in Lhasa, even along the way when you drive to other places in Tibet region.

Besides the famous prostration, you may often see rising smoke in the air especially at monasteries, mountain peaks, mountain passes，lakeshores and households in Tibet region wondering what this is and for? Well if you have a chance to get closer to the spot of burning, you may sense the smoke is aromatic with scent of fresh plants, which is quite different from the scent of burning incense in the temples of Chinese Buddhism. 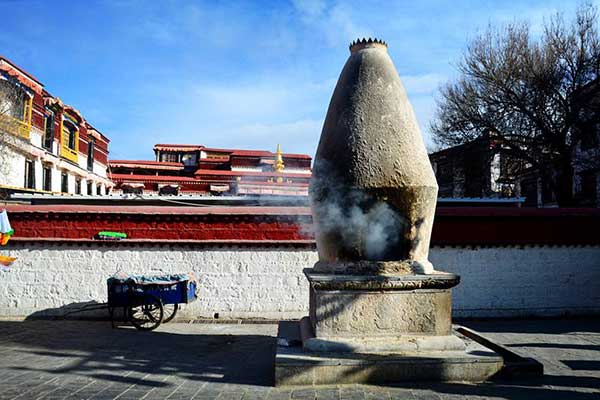 The rising smoke is from a religious ritual of burning branches of pine trees or cypress. The name of this ritual is Weisang. The term Weisang is a word combining a Chinese character and a transliteration of a Tibetan character. Wei, is a verb from Chinese language and means to burn something, while Sang, is a Tibetan verb which means to purify souls by cleansing.

It has a long history which can date back to the time of Bon religion. Some scholars even deduct that it originated from the religion of the aboriginal residents in Qinghai-Tibet Plateau three thousand years ago. More evidences show that, after Buddhism came to this land and became the major religion of Tibet, the ritual remained and had taken in the features from both.

As recorded in the renown Epic of King Gesar, King Gesar ordered his soldiers to hold a ritual by burning mugwort and cypress branches to pray for the help from five Tibetan gods to guarantee a victory of war.

And in the primitive society, when young men came back from war or hunting, the elderly people, women and children in the same tribe would light up a fire with branches of pine trees or cypress, people would sprinkle water on the young men while they cross over the smoke to clear the violence of sanguinary killings.

In general sense, Weisang has two meanings: one is to pray for blessing, the other is to offer gifts to gods. Food like tsampa, fried highland barley, candy, fruit like dry dates and raisins would be mixed and burn together with the branches. 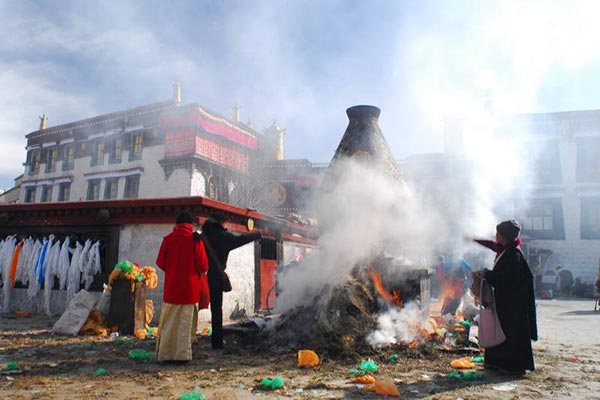 The performing ways of Weisang have changed in adaptation to the different spiritual needs of Tibetan people and the variation of the society. For instance, water would be sprinkled on the burning objects instead of on the people. Nowadays, Tibetan people still keep this ritual not only at a monastery but also in households or at lakeshores or mountain passes. They believe that if the gods are happy with the gratitude and modesty shown by people, they will bless the harvest of crops, the prosperity of animal husbandry and a life without disaster. At the beginning of the ceremony, they need to wash their hands with clean water, then ignite the branches and start doing invocations and sing the mantra“Om mani padme hum”.

This custom has permeated into all aspects of Tibetan’s life. Besides being an important religious offering ritual, Weisang is also a part of Tibetans’ wedding ceremony and birth ceremony to pray for blessings from their gods. And you won’t find it rare to sense a good scent in small Tibetan restaurants selling sweet tea and Tibetan noodles, because Weisang has almost become a routine that the owners clean the rooms and refresh the air by burning fragrant plants at the end of a day.

Where there are people, there are aroma of Weisang. So, whether you go to a temple or a local Tibetan house, you will find a Weisang stove. It is either located at the monastery, the mountain pass, the lakeshore, or the courtyard of a local family, all of the locations are carefully selected midst the cleanest places.

Related articles
Etiquettes in Tibet Learn some Tibetan Etiquettes and Taboos before traveling to Tibet, to understand and respect their culture during your trip.
Do's & Don'ts We list some Tibetan Taboos to show you how to have proper behavior while traveling in Tibet.
Wind Horse Flags-Prayer in the Wind The prayer banner written with the scripture text “wind horse” is said to be the earliest text appeared on the flag in the temple of Kagyu Sect. Tibetan Buddhism urges its believers to circularly and constantly recite mantra from scriptures, especially the six proverb words, since these six words are regarded as the root of all the classics.
General Tibetan Customs Introduction of Tibet local customs and traditions on languages, greetings, and diet habits, etc.
Sky Burial Custom in Tibet Celestial burial, popularly known as “sky burial”, is a funeral practice in which a human corpse is placed on a mountaintop to decompose while exposed to the elements or to be eaten by scavenging animals, especially carrion birds.
Mani Stones in Tibet If you travel to Tibet, you will see a special kind of sacrificial altar that is piled up with lots of stones-Mani Stones, also known as the “holy heap.” “Mani” is the shorter form of one of the mantras of the Sanskrit scriptures.