Wind Horse Flags-Prayer in the Wind

The prayer banner written with the scripture text “wind horse” is said to be the earliest text appeared on the flag in the temple of Kagyu Sect. Tibetan Buddhism urges its believers to circularly and constantly recite mantra from scriptures, especially the six proverb words, since these six words are regarded as the root of all the classics. Hence, as long as you recite the mantra repeatedly, it can help you accumulate your merits and when the merits come to a successful issue, you will get free in terms of spirits. When the prayer banner is blown up by the wind and makes a “squelch” sound, it hears like reading mantra. Therefore, no matter it is a temple or a village, there will always be a column up to a few meters stuck on the ground hanging a streamer written with mantra on it, flying in the wind. Among all these colored flags, the one standing on holy mountain “Kailash” is the largest and the most famous, which reaches up to 24 meters with colored streamers flying on the top. On April 15th of each year according to Tibetan calendar, a traditional streamer changing ceremony will be held in Tibet. At that time, countless monks as well as numerous laities will come to view the ceremony. When the old faded flag was taken off, people will scramble to snatch it because they deem this old flag can bless them from all evils after hanging in the wind for the last whole year. 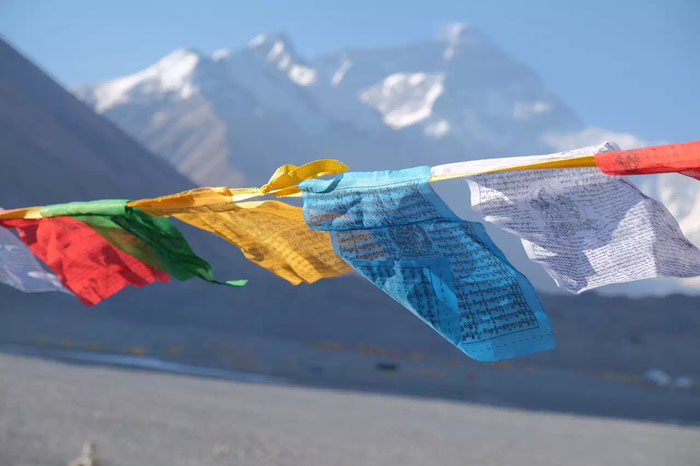 In fact, in the transition that the holy banner turned to prayer streamer, the horse on the flag also changed from “soul sending horse” to “mantra carrying horse.” Carefullmomentumy observe the patterns in the center of the prayer flag, you will see a vigorous horse shouldered something heavy that are regarded as “Nuobumoba” in the Tibetan language which refers to the “Mani Sambo”. Around the top of the puzzle painted with the sun and the moon, while the four corners is respectively still the four animal patterns. Sometimes, the four patterns are simply replaced with the characters of the four animals. Occasionally, there also printed some other images but generally are Buddha figures, Bodhisattva together with other related Buddhist images. Moreover, Tibetan Buddhism also endowed several animals originated from “the five elements” with a whole new connotation, believing the five animals respectively represent the five element of Buddhism: earth, water, wind, fire and void. Roaring lion is a symbol of “earth” for lions live together in the snowy mountains. Auspicious dragon stands for “water” since dragon swims in the water. Ferocious tiger symbolizes “wind”, because tiger is always regarded as the king of the forest and wind is born in wood on the basis of the five elements theory. The holy roc emblems “fire” on account of it being believed as a deity in the far ancient times by Tibetan people and it can produce fire and bright flames and other supernatural powers that are similar to fire. At last, the horse in the center of the banner is a horse known as “steed” and “sacrificed horse” or “Tajue” according to Tibetan language, signifying the void that “earth” “water” “wind” and “fire” attached to. 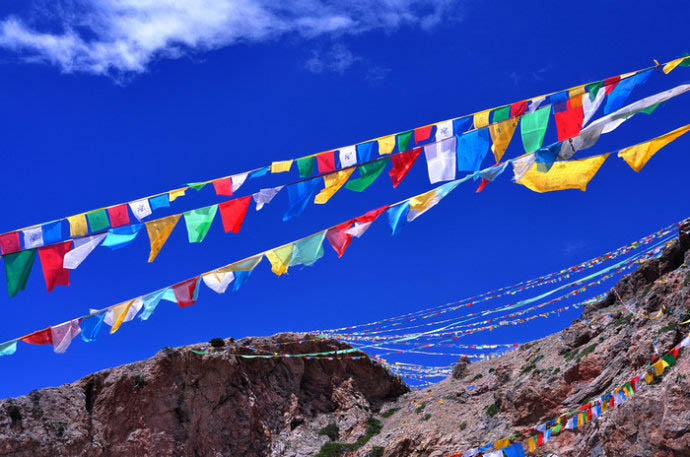 In the civil, Tibetan people will re-hang the prayer banners on the New Year’s Day of each year. In the northern Tibet and Gansu Province as well as Qinghai pastoral areas, most herdsmen will lead the whole family to high places like slope in the fourth Tibetan month when it is time to worship mountain deities. At that time, they will stick the banner tied on shaft into a stone pile. Tibetan compatriots who live in the town usually hold the banner changing ceremony on the third day of Tibetan New Year, called “Tuosui” according to Tibetan language. On the day, everyone will gather at the roof regardless of age and gender. In accordance with age, the elder sits on upper place while the younger generation sits followed in orders. After the end of this ceremony, they will not just leave then, instead, they will chat with each other, toast to each other and sing together. At the very beginning, the “Tuosui” ceremony was just all neighbors gather together to worship the gods. But till now, it actually has already been endowed with a more realistic significance. There is a such pet phrase that after all it is too far to help you out in urgency for relatives in the distance but neighbors near are always helpful then. Although neighbors living together during the whole year always have some inevitable bumps, they don’t want to take it to next New Year. Thereupon, they tend to eliminate all the unhappiness in the past year by holding this “Tuosui” ceremony. Hence, welcoming the New Year with a smiling face and living in harmony have become the practical significance of the ceremony. If you overlook the whole Lhasa City from a high station, you will find the city full of completely new banners blowing in the wind. Tibetan people’s wishes blessing for longevity and health also wind up with flying banners. A new year begins so does a happiness life.

Related articles
Etiquettes in Tibet Learn some Tibetan Etiquettes and Taboos before traveling to Tibet, to understand and respect their culture during your trip.
Do's & Don'ts We list some Tibetan Taboos to show you how to have proper behavior while traveling in Tibet.
General Tibetan Customs Introduction of Tibet local customs and traditions on languages, greetings, and diet habits, etc.
Sky Burial Custom in Tibet Celestial burial, popularly known as “sky burial”, is a funeral practice in which a human corpse is placed on a mountaintop to decompose while exposed to the elements or to be eaten by scavenging animals, especially carrion birds.
Mani Stones in Tibet If you travel to Tibet, you will see a special kind of sacrificial altar that is piled up with lots of stones-Mani Stones, also known as the “holy heap.” “Mani” is the shorter form of one of the mantras of the Sanskrit scriptures.
Tibetan Dwelling Customs and Etiquette The diversity of Tibetan residential customs is not only manifested by the buildings of square shape and stone structure but also the more abundant types caused by different regions.