Most parts of Tibet are influenced by the continental climate, while the Everest region near Tingri County features a monsoon climate under the impact of the Indian Ocean's current. And because the Tibetan plateau is the largest highland area in the world, it also features a distinctive alpine climate where the temperature, precipitation, wind scale and humidity vary dramatically, according to the elevation change. Sitting at 5,200 meters above sea level, the Everest Base Camp(E.B.C) in Tibet side is around 1,000 meters higher than the nearest town, Shegar(4,330 meters), which is the county seat of Tingri. This results in different weather conditions at E.B.C and Shegar. This post is to introduce the monthly weather in the E.B.C region and to give weather-based tips for sightseeing or mountaineering there.

Temperature, Wind and Precipitation at E.B.C in Tibet

During the winter months, the weather is dry and heavily windy. As for the summer months, they are relatively humid with 80 to 90% of the annual precipitation being concentrated within this period. Autumn is the transition season between the monsoon season (overlapped with summer) and the frigid wind season (inclusive of winter and spring).

Everest Base Camp in the Tibet side is accessible and open to travelers all year round. The only inconvenience lies in the decreasing options of accommodation, starting from late October and lasting until the end of March. By this point, the tent guesthouses would be packed up and withdrawn from the base camp due to the harsh climate in the winter and dropping number of travelers.

Apart from this, the individual and their personal preference is what determines whether the weather at E.B.C can be defined as good. If you opt for mild and moderate weather, you can visit in the summer when the chance of rain is higher. Visiting in April, May, September and October are more likely to bring forth a clear view of the peak because of its dryness and lack of rain during this time of the year.

No matter which season you plan to visit E.B.C, the daily temperature ranges from 10℃ to 15℃. This means even in the warmest month, August, the morning and night can be seriously cold. Warm clothing is the top packing essential. 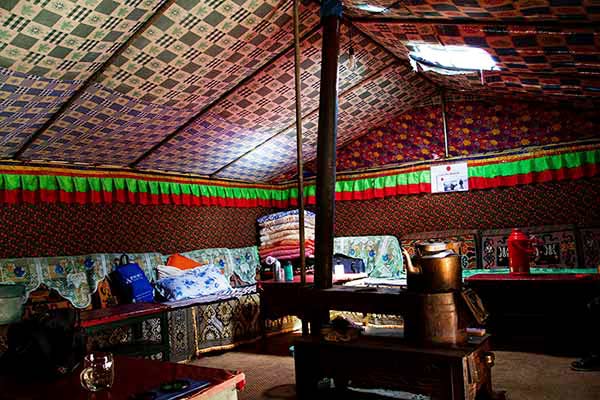 Tent Guesthouse at Everest Base Camp

April, May and October are the best time for attempting a summit at Mount Everest. The wind season has just gone, and the monsoon season hasn't arrived yet. The weather is warm, mild and has high visibility.

According to the experienced mountaineering experts, the season with wind speed lower than Force 6 is the most suitable time to undergo the climbing at Mount Everest. The rainy season at the north face of Mount Everest is from mid-June to mid-September, which is when July and August see the most rainfall.

The zone above 7,000 meters at Mount Everest is of vital importance for the safety and success of climbing. The wind variation in this area should be researched and prepared for prior to going there. According to previous statistics, the fastest wind speeds occur between January & March and between November & December, which is also the wind season for the majority of Tibet.

With very little rain and a milder temperature, the transition season comprised of mid-April to early June and mid-September to early October is proven to be the best time to go mountaineering at Mount Everest in Tibet side.

Climbing at Mount Everest is only allowed if you have professional climbers of a registered mountaineering company to accompany you. All permitted climbers must be accompanied by a professional team. The essentials to pack for mountaineering should be sought after from the contracted consultant. Currently, in Tibet, the only authorized company for issuing a climbing permit and arranging a climbing activity is called Himalaya Expedition.