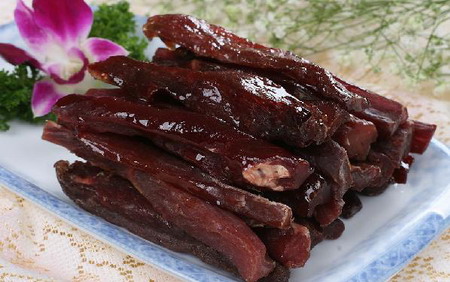 In the winter, beef and mutton are cut into long stripes to be air-dried in the circular ground caves or bins walled with stones or dungs. Dried beef and mutton keep better and longer, as the bacteria in them are killed during the drying process in deep winter. Dried meat also packs well. In the next year, the dried meat will be Bar-B-Qed or be eaten raw.

Big chucks of fresh meat are boiled in a pot. Salt, ginger, spices are added. The meat is served when it changes colour. People take the meat by hands and cut them with the carried knives. The breasts and spareribs are for the guests. The tails of white sheep are for the guests of honor. If a young man is treated with a tail of white sheep in his girl friend's house, it implies that he can hope.

There are four different sausages in Tibet: blood, meat, flour and liver.

Milk is drunk fresh or made yogurt, or is separated by churning into butter and curds.

The Tibetan butter is home-made and can be further processed and refined into butter known elsewhere. Butter is used for food with `tsamba', tea etc., or for the fuel of lamp.

After butter is made from milk, the remain becomes sour and can be made curd. Milk curd placed in the mouth and sucked on helps to quench thirst and can be mixed with barley flour to make curd-pastry, a holiday delight.

The milk is boiled first, after removed from stove, some old yogurt is added. Yogurt will form in a few hours. In the central and western parts, the yogurt is thin and smooth. In the east, it is too thick to stir. Yogurt is mentioned in the famous poem `the story of Gesar', and has been a Tibetan food for more than 1,000 years.

Related articles
Where to Eat in Tibet This page introduces some nice and comfortable restaurants in Lhasa.
Tibetan Food & Drink Tibetan cuisine plays an important role in Tibetan culture. This page will tell you more about Tibetan Food and Drink, such as Tibetan Tsampa, Tibetan Sausage, Tibetan Yoghurt, Yak Butter Tea, etc.
The Characteristics of Tibet Cuisine This page introduces some Characteristics of Tibet Cuisine.
Staple Food This page introduces some daily food in Tibet, such as Tibetan Tsampa, Tibetan Sausage, Yak Butter Tea, etc.
Origins and Features of Tibetan meals The Tibetan meals evolved from the traditional Tibetan food were formed in the last century from 50s to 80s with a very long history and full of Tibetan characteristics.
Ginseng Fruit Rice with Yak Butter Ginseng fruit rice with yak butter is also called “Zhuomazhesi” according to Tibetan language. At first, put the cooked ginseng fruit onto the surface of rice.