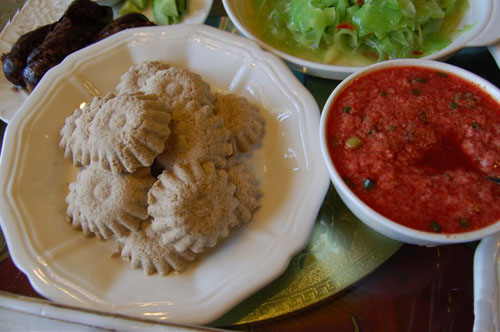 The main staple food is `tsamba'. This is made of roasted barley (with husk) ground with a hand mill into very fine flour, which is mixed with a little tea and then rolled into small lumps and eaten with fingers. Butter, curds and sugar add flavour.

`Tubo', a savoury evening gruel made of lumps of wheat flour, tsamba, dried meat and a tuber called `yuangen'.

When traveling in Tibet, you will find various delicacies with unique ethnic flavor besides the magnificent landscapes on the way.

Food in Tibet differs in pastoral areas and agricultural areas. The staple food includes roasted highland barley flour, wheat flour, meat, or red food, and milk, or white food. The principle in summer is the white food, while that in winter is the red food. Local flavors in the pastoral areas are mutton sausage, and dried beef.

The flavor of the Tibetan food is fresh, light, and tender. Salt, onion, and garlic are the main ingredients.

There are many restaurants in Lhasa, Shigatse, and Zetang, All restaurants of various classes are decorated and furnished in the traditional Tibetan style. Diners can enjoy delicious Tibetan dishes while admiring paintings and murals symbolizing happiness and good luck in the restaurants. High on the menu are such flavors as sausages, barley wine, butter oil tea, beef and mutton eaten with the hands, yak tongue, steamed buns, zanba made from highland barley, pastries, sweet tea, butter tea, dried beef, and xiapuqing, or minced mutton and beef.

Traditional Tibetan food consists mainly of barley, meat and dairy products. Vegetables are scarce in the high altitude. Tsampa is the staple food of Tibetan people, which is consumed daily. Tsampa is actually barley flour made from parched barley, un-husked and ground into fine flour. Mix the flour with salted butter tea in a bowl, rotate the bowl with the left hand and mix the food with the fingers of your right hand, rolling it into small lumps, and squeezing it into your mouth with your fingers. Other ingredients may also be added to add flavor.

Tibetan people eat Tsampa at every meal, and when traveling, it is brought along as a ready made meal. The salted butter tea is an indispensable Tsampa companion. Boiled tea is poured into a long cylindrical churn along with salt and yak butter, and vigorous churning makes the ingredients well blended and ready to serve. Tibetan people drink it throughout the day. Yak butter is a very important food for Tibetans. It is separated from yak milk by hard churning, and after the butter is separated from the milk, the residue becomes sour and can be made into milk curd, which is a nice thirst quencher and can be made into a delightful milk curd pastry with bailey flour.

Yoghurt is an important dietary meal for Tibetan people. The creamy milk produced by yak cows is superb. Tibetan nomads in the eastern Tibet manufacture their yoghurt in a special process. The milk is boiled first, and after removed from the stove, some old yogurt is added in. and yogurt will form in a few hours. Yogurt has been a Tibetan food for more than 1.000 years.

Dried beef and mutton stripe is also popular food in Tibet. In the winter, beef and mutton are cut into long stripes and hung in shaded areas to be air-dried. The dried meat is crisp and tastes good, and can be eaten raw, since the cold temperature in the winter has killed bacteria during the process.

Big sides of beef and mutton boiled with salt, ginger and spices are also popular food among Tibetans. They take the meat and cut them with their knives. The guests will be treated with breasts and spareribs. If you are treated with a tail of white sheep, it means that you are deemed as their guest of honor.

Blood, meat, flour and liver sausages are also favored by many Tibetans. Other food stuffs include Momo (Tibetan dumplings), Thenthuk. (Tibetan noodles), and yak tongue.
At present time, in many Tibetan towns, in Lhasa for example, Tibetan food is supplemented by Chinese food, mostly Sichuan food. Vegetables and fish become available in market. However, Tibetan people seldom eat fish due to their religion and custom. Restaurants serve Tibetan, Chinese, and even western food, mushroom in the streets to accommodate tourists. In Lhasa Hotel (formerly Holiday Inn), the restaurant provides Chinese, Indian, Nepalese and western food. Kailash, Tashi, Snow Lands, Dunya (former Crazy Yak), and Makye Ame are popular among Travelers in Lhasa. The choice for vegetables will be limited due to the short agricultural season.

Tibetans like drinking tea. Besides salted butter tea, sweet milk tea is another popular beverage. Hot boiling black tea filtered is decanted into a churn, and then fresh milk and sugar are added.

Vigorous churning turns out a light reddish white drink. There are many tea shops in Lhasa serving the sweet milk tea. Tibetan barley beer, called Chang is popular among all Tibetans. The beer is mild, slightly sweet and sour and contains little alcohol. The beverage is worth trying. Soft drinks and beer are also available in Lhasa.

Related articles
Where to Eat in Tibet This page introduces some nice and comfortable restaurants in Lhasa.
Tibetan Food & Drink Tibetan cuisine plays an important role in Tibetan culture. This page will tell you more about Tibetan Food and Drink, such as Tibetan Tsampa, Tibetan Sausage, Tibetan Yoghurt, Yak Butter Tea, etc.
The Characteristics of Tibet Cuisine This page introduces some Characteristics of Tibet Cuisine.
Main Types of Food This page introduces some daily food in Tibet, such as Tibetan Tsampa, Tibetan Sausage, Yak Butter Tea, etc.
Origins and Features of Tibetan meals The Tibetan meals evolved from the traditional Tibetan food were formed in the last century from 50s to 80s with a very long history and full of Tibetan characteristics.
Ginseng Fruit Rice with Yak Butter Ginseng fruit rice with yak butter is also called “Zhuomazhesi” according to Tibetan language. At first, put the cooked ginseng fruit onto the surface of rice.