Speaking of Nyingchi in Tibet, it is a must to talk about Lulang which is located on the Sichuan-Tibet highway about 80 km far away from Bayi Town. All the way along can be seen snow-capped mountains, forests, streams, grassland and wild flowers as well as villages. If came to Lulang, it will be such a regret for travelers to miss out a traditional Tibetan Cuisine-Stone Pot-Cooked Chicken. Compared with other kinds of Tibetan local food, Stone Pot-Cooked Chicken probably fits more tourists out of the Tibetan plateau.

Just as its name implies, the stone pot-cooked chicken is stewed with a stone pot. The best stone pot is produced in Medog County, Nyingchi Prefecture-the last county within Chinese territory before Brahmaputra River flows into India where produced a large quantity of Medog stone which is a rare natural steatite all over the world. What surprised people is that texture of the steatite in Medog is so soft that it can be cut out with steel knife. However, when the stone leave Medog, it will get as hard as steel, became the best material of making stone pot. 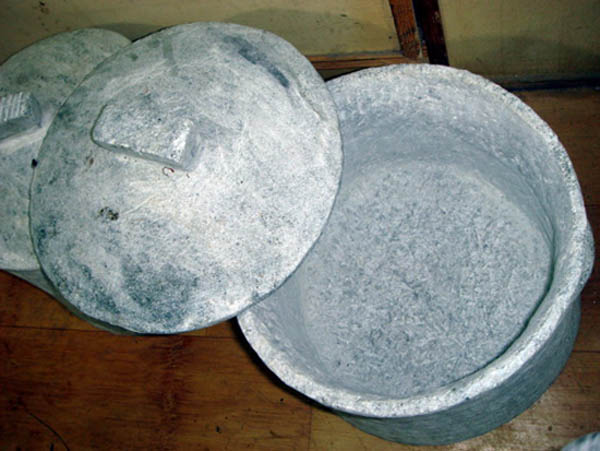 In Medog, it is restricted that people can climb up to mountains to collect this kind of natural steatite only in July and August of each year. Normally, quarrymen will prepare amount of food and firewood that are enough to maintain a life of 2 months before they climb onto mountains for the natural steatites. Initially, carriers will take raw stone materials out of the mountains. Then, Moniba people will carefully chipped monolithic stone into stone pots. During its manual chisel process, craftsmen must pay much attention to their strength since it will be easily pierced through once they get a little bit impatient. Usually, the dominant hue of Medog Stones is mainly dust color, and barrel shaped, being about 2 or 3 cm in thickness in different sizes. The largest ones normally have the diameter of about 30 cm, and medium ones of 20 cm while the smallest ones of only 10 cm, having flat or curved bottom.

There has not constructed roads leading to outside world. That’s why the completed Medog stones can only be carried out with the help of yaks or horses and then be immersed into the Brahmaputra River for around 30 days until it is put into practical use.

Because of the extremely hard production process as well as the carriage of Medog stone pot, food cooked with stone pot has long been adorable of Tibetan people in the long river of Tibetan history and even till today, there completedly preserved the stone pot used by King Songtse Gampo in the Potala Palace. It is said that Tibetan aristocrats in the history all had their private stone pots and some Tibetan medicines were made with the pot. According to experiments, stone pot is able to resistant to high temperature of 2000 degrees Celsius with desirable merits including fast heat transition, non-stick, heat-keeping and so on, containing 16 kinds of trace elements such as zinc, iron, calcium and magnesium etc. Regular consumption of stone pot-stewed food has obvious therapeutic effects on the health of people suffered from hypertension and heart disease, etc. and can be more conducive if keep using stone pots.

In fact, Stone Pot-Cooked Chicken was actually invented accidentally by a man came from Chongqing. Originally, he was a vendor came to Tibet to sell casserole-cooked Tofu. Not long time later he found it odd that local Tibetan people would go out with a stone pot and cook on a special mess just on the roadside because the food cooked in this kind of pot will taste better and smell more fragrant. He was later acknowledged that the pot was produced from Medog. Posh food is always made with it though its awkward shape. After he saw wild Tibetan chicken in the field, a super idea just hit upon him which was to create the delicious stone pot-cooked chicken.

The tasty cuisine however has to experience a series of a little bit complicated producing process. First of all, the chicken is selected from the endemic species living in snow-covered plateau and growing very slowly, free range raised all year round which made it more adaptable to the changeful cold climate of plateau. In addition, they also add some medicinal materials such as Gymnadenia Conopsea, Dangshen and Tibetan caladium as auxiliary materials, which are endemic to forests as well. Particularly, the Gymnadenia Conopsea, also known as Buddha’s palm ginseng for it is in the shape of a palm, is commonly with 4 or 5 palm cracks and hypertrophied tuber. This herb is deemed as warm class in Chinese medicine with a sweet taste and neutral nature. Moreover, people hold that it is an effective medicine to nourish Yin and tonify kidney. Therefore, Tibetan chicken simmered in Medog stone pot with palm-shaped ginseng became a natural delicious dish.