What to Eat in Tibet?

There are many types of dishes in Tibet. The most popular ones are stewed chicken with Chinese caterpillar fungus, a traditional herb which can also be stewed with beef. Then there are fried mutton ribs, roasted lamb leg, air-dried meat, cold yak tongue, Tibetan sausage, potato curry, stewed beef and turnip, Tsampa ginseng sweet rice and various kinds of desserts.

Tsampa: Tsampa is the staple food of Tibetan people and ranks first among the four treasures of Tibetan food. It’s roasted highland barley flour, boasting a good smell and taste. It’s easy to carry Tsampa and there are many ways to eat it. Thus it is widely considered the best food for a traveler. 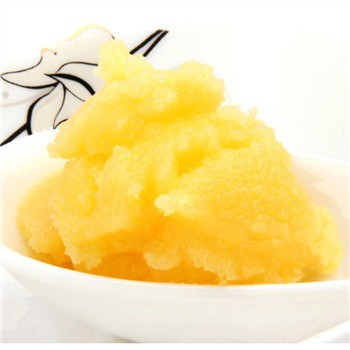 Yak Butter: Yak Butter, refined from the milk of yaks, is the daily food of Tibetans. It has very high value of nutrition. The way of Tibetans to refine yak butter is very intriguing. Tibetan nomads usually refine milk in the primitive segregators manually. They pour the heated milk into a big wooden bucket called "Xue Dong", then whip forcibly up and down for many times to segregate butter from water. Gradually a tier of something light yellow was afloat, subsequently ladle the butter and put it into a leather bag to cool it. 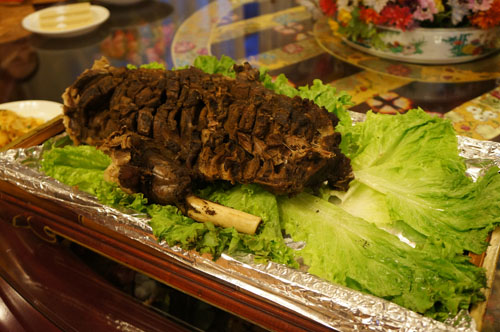 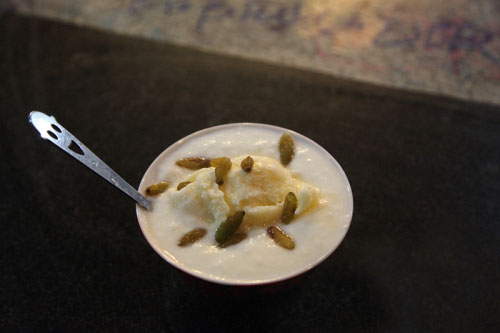 Tibetan Yoghurts: Yoghurt is an important dietary meal for Tibetan people. The creamy milk produced by yak cows is superb. Tibetan nomads in the eastern Tibet manufacture their yoghurt in a special process. The milk is boiled first, and after removed from the stove, some old yogurt is added in. and yogurt will form in a few hours. Yogurt has been a Tibetan food for more than 1000 years.

Tibetan Sausages: Sausage was early from more than 1000 years ago. It is a food created by nomad. The main method is to prime different materials into the fresh animal guts such as sheep, pig or cow.

The Tibetan sausages can be either steamed or roasted and then cut into slices to eat. Tibetans usually make this food in batches during new-year time. The Tibetan sausage taste fresh and goluptious and not oily, which is a nice cold dish. Then it can be stored for about one year. 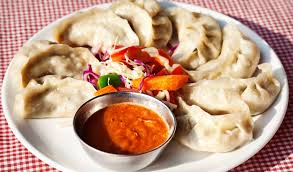 Momo (Tibetan Dumplings): Dumplings, called momos in Tibet, are every Tibetan’s favorite food. Momos are typically made on special occasions, and family and friends pitch in to make them together. Momos can easily be found at most restaurants, and there are many kinds, including potato momos, mutton momos, veg momos, and others. Tibetans dip the momos into spicy chili paste for added flavor, and wash it down with soup broth. 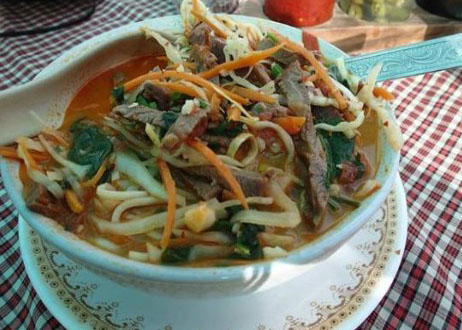 Thenthuk (Tibetan Noodle Soup): Pronounced roughly like “ten” + “too” + “k”, is a typical Tibetan noodle soup can keep the nomads withstand the coldness during winter time. The main ingredients are wheat flour dough, mixed vegetables and some pieces of mutton or yak meat. Vegetable thenthuk is a common modern day option too.

What to Drink in Tibet?

The famous Tibetan drinks include the traditional highland barley wine, buttered tea, sweet tea, milk tea, fresh yak milk and sour milk. The Lhasa beer made from pure underground water has taken on the brand “Medicine King Hill.” Across Tibet, many places produce mineral waters containing different trace elements.  The highland barley wine is fermented directly from highland barley and tastes sweet and sour with low amount of alcohol. Similar with the rice wine in Central China, the Tibetan highland barley wine tastes quite different from the vehement highland barley wine made in Qinghai and Gansu. Tibetans follow several ways to drink tea, the most well-known is the buttered tea. This is a unique way to drink tea in highland and cold areas. They pour tea, butter and salt (or milk) into a special tea barrel. While stirring them, they add egg or walnut. Another kind is the sweet tea stewed with high-class black tea, fresh milk or milk powder and white sugar. 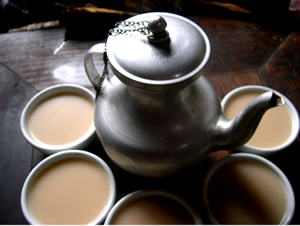 Salted Yak Butter Tea: The salted butter tea is made of boiled tea poured into a long cylindrical churn along with salt and yak butter. Vigorous churning makes the ingredients well blended and ready to serve. Tibetan people drink it throughout the whole day. Almost every traveler samples the yak butter tea because it is surely to be a highlight of the trip to Tibet. 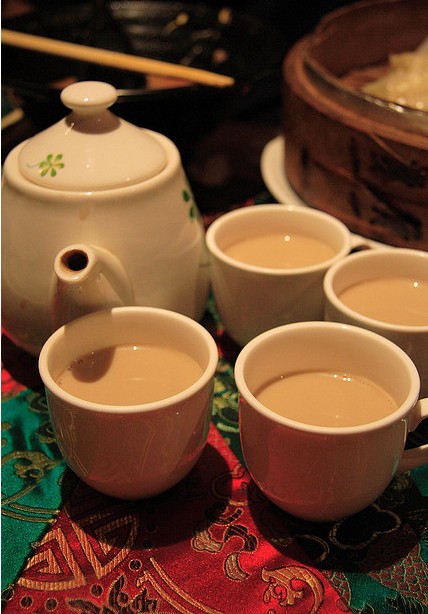 Sweet Milk Tea: Besides salted yak butter tea, sweet milk tea is also popular among Tibetans. Hot boiling black tea filtered is decanted into a churn, and mixed with fresh milk and sugar. Many teashops in Tibet serve the sweet milk tea. It is worth of trying it on the trip. 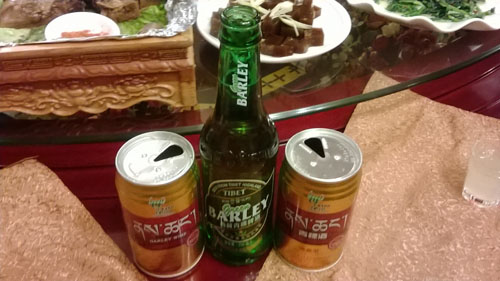 Tibetan Barley Wine: Known as Chang, Tibetan barley wine is brewed from fermented barley grown on the highland. The wine is mild, slightly sweet and sour and contains little alcohol. The taste of alcohol differs from one to another due to the brewing method and duration. It is a very popular alcoholic drink in Tibet.