In 1965, Chinese government announced the establishment of Tibet Autonomous Region (hereinafter referred as TAR). Lhasa, the ancient capital for ethnic Tibetan people hitherto remains the capital of TAR. Currently, there are 6 cities and 1 prefecture under the jurisdiction of TAR, which are Lhasa, Shigatse, Shannan, Nyingchi, Chamdo, Nagchu and Ngari Prefecture. With an area of 1.2 million square kilometers, TAR is the second largest provincial-level administrative unit in China, coming next to its neighbor in the north, Uygur Autonomous Region of Xinjiang (XUAR). The population of TAR, according to the census in 2017, was about 3.3 million, of which around 90% were Tibetan, roughly 2% were other minority ethnic group, and around 8% residents were Han Chinese. 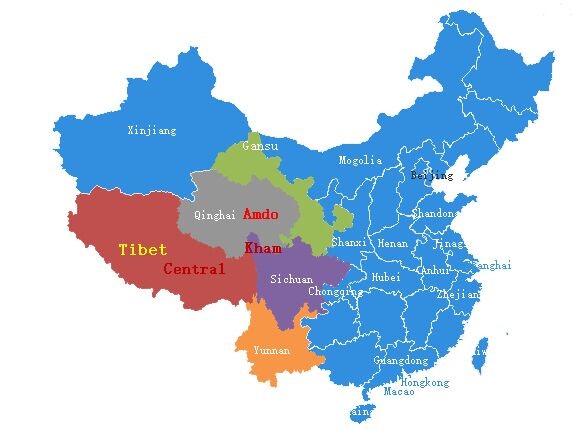 Map of Tibetan Areas and Tibet Autonomous Region in China

TAR is regarded as what the item Tibet indicates by most people globally in the modern world. However, from the view of Tibet’s history, and based on how broad the area with Tibetan inhabited actually is, Tibetan-populated area may be more accurate to include the relative entity of the homeland where this nomadic ethnicity has been living for thousands of years.

Foreigners, though on a valid Chinese visa, is obliged to apply for a Tibet travel permit issued by Tibet Tourism Bureau, to travel to Tibet. For other guests, whose occupations are diplomats, government officers or journalists, they need to have the arrangement by the Foreign Affairs Office of TAR.

Almost equivalent to the population of ethnic Tibetan living in TAR, the rest 2 million of the whole Tibetan ethnicity in China are now inhabiting in provinces of Qinghai, Sichuan, Gansu and Yunnan. Tibet had been through unity and division in the history long before getting the name “Tibet” in Qing Dynasty. The territory of ancient Tibet regime used to be inclusive of much broader area than that of TAR.

In the broad sense of Culture Tibet, all the Tibetan prefectures in Qinghai, Sichuan, Gansu and Yunnan with assembled Tibetan communities, together with TAR, are generally referred as Five Tibetan-inhabited Areas. These five parts comprise the entity of Tibetan culture.

The other four Tibetan-populated areas made of Qinghai, Sichuan, Gansu, and Yunnan are bordering TAR. The distribution of Tibetan prefectures in these four provinces are reasonably located close to the border lines. They share very similar culture and custom, and are also followers of Tibetan Buddhism, as with residents in TAR. 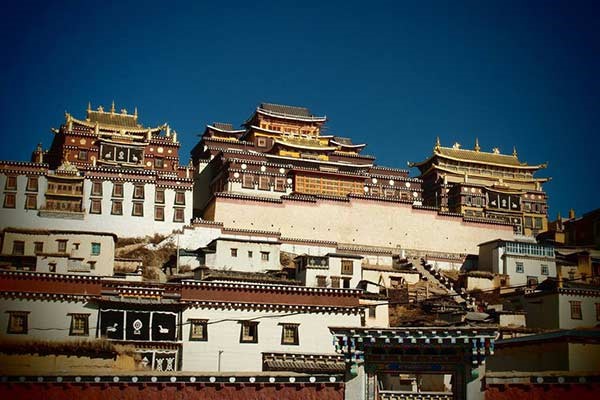 In contrast to the travel policy in TAR, travelers holding foreign passports do not need a travel permit to tour in these four provinces, as long as they have a valid Chinese tourist visa (L type).

According to various topographic features and the dialects distribution, Tibetan-populated area used to be divided into three proportions, namely U-tsang, Amdo, and Kham in Tibetan. Nowadays, people from these three regions still speak slightly different Tibetan. The classification is believed to be made during Yuan Dynasty, when the Mongolian ethnicity were in charge of the mainland China in the 13th Century A.D., which is also used in the modern days of China when referring to the variety and diversity within the entity of Tibetan ethnicity.

U-tsang is situated in the south-central Tibet in the old time and now, with the capital city Lhasa as the regional center. It indicates the area with Lhasa, Shigatse, Shannan, and Ngari and believed as the most fundamental part of Tibet in the history and now, with the religious and administrative significance. 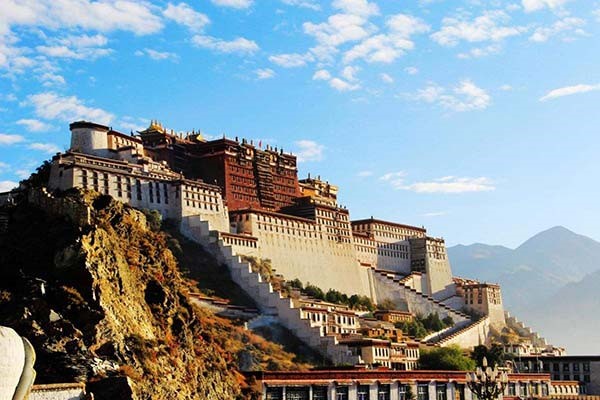 Amdo covers most of Qinghai Province, part of northwest Sichuan Province, and southwest of Gansu Province. It has always contributed as the biggest pastureland in the Tibetan-populated area, breeding good horses. Influenced greatly by the two ethnic neighbors Han Chinese and Mongolians, the folk custom and culture here though still typically Tibetan, are very distinctive by the amalgamation.

Kham includes cities of Nagchu, Chamdo and east Nyingchi in TAR, Diqing Prefecture northwest of Yunnan, Garzê Prefecture in Sichuan. Kham is at the transition zone between the habitants of Han Chinese and Tibetan. There are also other minority ethnicities residing in Kham, sucha as Qiang minority and Yi minority. Thus, Kham is influenced by diverse ethnic culture and believed as the “corridor of culture”.

A glimpse at the attractions in Amdo and Kham

Besides the spiritual center of Tibetan Buddhism and the spectacular natural landscape endemic to TAR, the branches of Buddhism stretch far towards into the other four Tibetan-populated area, and the Tibetan dwelling in the rest four are also equally blessed with stunning waters and mountains, and the richness of religion and culture.

Qinghai Lake is the largest lake in China, located around 120km, west of capital city Xining, in Qinghai Province. Easily approachable by bus or car with well-conditioned roads. The average altitude is 3000m, which makes it a preceding stop for many tourists before their entry into Tibet. As a humble stop, Qinghai Lake might be too beautiful to be neglected. The lake in a clear sunny day, glisten as if thousands of diamonds shining on the surface of blue jade. The sunset and sunrise along the lakeshore are breathtaking. The extra that Qinghai Lake offers is a perfect circuit route for cycling. Every summer, especially in July, lots of bikers would here, renting a bike and taking around 4-5 days to finish the circuit. The gently rising pastureland is painted by vast verdant summer meadows, and joint by patches and patches of fresh yellow rapeflowers. The cattle and horses may also in happiest mood, satisfied with the abundancy of juicy graze.

Jiuzhai Valley is in Aba Tibetan Prefecture in Sichuan Province, adored by tourists, with the recognizable best water scenery. It was so famous that during the longest China National Holiday, tour in Jiuzhai Valley could be a disaster in a tourist’s jam. Visitors who have a flexible, usually plan their trip to travel in Jiuzhai Valley in September or November. At that time trees around the waters turn into various warm colors of red, yellow, orange, brown and green. The beauty of plants and waters are just generously presented during the one visit. A branch of Tibetan ethnicity, Biema Tibetan are living in this area. Biema means Tibetan Soldiers. Though, Jiuzhai Valley Scenic Spot is still closed for public because of the ongoing reconstruction and recovery after the earthquake in 2017, it is definitely worth a wait.

Larung Gar Buddhist Institute (also namedSerta Monastery), is located southeast of Garzê  Prefecture, Sichuan Province, belonging to Kham region of Tibetan-inhabited area, situated with an altitude of 3600m. Established in 1980, it has arisen into the largest Tibetan Buddhist institute worldly. Around 5,000 monks and nuns live and study here. The residential areas are divided with clear boarders for nuns and monks. They are not supposed to cross the boarder and enter the other sex’s region. Surrounded by mountains, Larung Gar Buddhist Institute is a magnificent complex of red cottages and red temples in the valley. The magnificent view made by the thousands of red buildings has let the inner parts of buildings be a myth. Nearly all of them are actually plain with only basic furniture and necessities, except several sutra halls with comparable decorations. These assiduous followers live a simple and frugal life here, studying the doctrines and conducting practice devotedly. 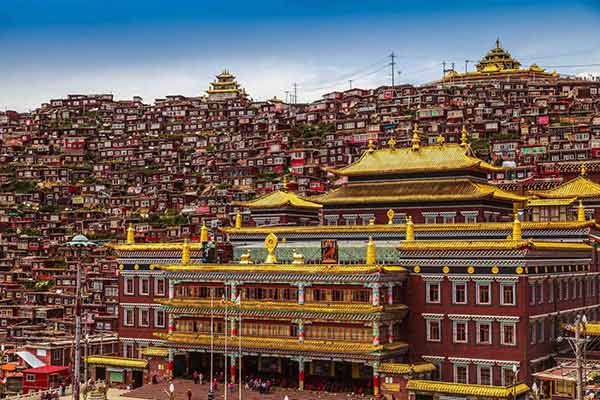 Kumbum Monastery is the most active spiritual center of Buddhism in northwest of China. It was built in 1377, located in Huangzhong County, Xining City, Qinghai Province. It was the birth place of Master Tsongkhapa, the creator of Gelug Sect. Tibetan Buddhism. The building complex is an accumulating work beginning with stupas and towers, then following by temples. Thus, it gained the other name Ta’er Lamasery (in Chinese, Ta’er means towers). Kumbum Monastery is within each approach from Xining City. Public transportation along the route is modern and convenient. With a distance of around 27.5km from Xining, it takes roughly 35 mins driving to reach. Butter Sculpture in Kumbum Monastery is praised as being model of the highest art level. The prayer wheel set is also well-reputed among the monasteries as one of the grandest.

Related articles
Lakes in Central Tibet (Tibet Autonomous Region) Tibet is a land with thousands of beautiful lakes. The three holy lakes in Tibet are Yamdrok Lake, Namtso Lake, and Manasarovar Lake.
Lakes in Amdo and Kham Tibetan Areas Amdo and Kham are geographically neighboring Tibet Autonomous Region, and have the share of similar natural landscape. The most three famous lakes in Amdo and Kham Tibetan-inhabited areas are Qinghai Lake, Ranwu Lake and Lakes in Jiuzhai Valley.
Mountains on Tibetan Plateau Home to the highest mountains and peaks in the world, Tibet got the name “the roof of the world”. There are 44 mountains in Tibet including Mount Everest and Mount Kailash. Many of these mountains are worshipped as holy land of gods or goddesses. Their existence provides spiritual support to Tibetans.
Highland Barley on Tibetan Plateau Tibet barley started to be cultivated on Tibetan Plateau, found in the area with an altitude above 3400m. This crop is the key factor that enabled Tibetan people to reside on Tibet Plateau. Tibet barley also contributes the main ingredient of tsampa, which is a typical staple food in Tibetan people’s daily diet.
Hot Springs in Central Tibet (Tibet Autonomous Region) Tibet is a land with hundreds of hot springs. The most famous and popular hot springs in Tibet are Yangpachen Hot Spring, Tidrum Hot Spring, and Riduo Hot Spring.
Vegetation on Tibetan Plateau From southeast to northwest of Tibet, montane forests, alpine meadows, alpine grasslands or steppes, semi-deserts or alpine deserts are distributed with a clear pattern of zonation, which is quite different from other parts of inland China, or the neighboring countries. This article is an introduction to vegetation in Tibet.