Besides U-tang, currently as Central Tibet, the other two historical Tibetan areas are Amdo and Kham. Amdo and Kham are geographically neighboring Tibet Autonomous Region, and have the share of similar natural landscape. The most three famous lakes in Amdo and Kham Tibetan-inhabited areas are Qinghai Lake, Ranwu Lake and Lakes in Jiuzhai Valley.

Qinghai Lake is in Hainan Tibetan Prefecture of Qinghai Province, of which the Tibetan name is Kokonar Lake. With an area of 4436 square kilometers, it is the largest inland lake and the largest saline lake in China. As the northeastern part of Qinghai-Tibet Plateau, and at the south face of Qilian Range, it is another gem for Tibetans. Qinghai Lake is in the Amdo Tibetan region. Trekking or cycling along the lake, you’re likely to encounter Amdo Tibetans on their pilgrimage journey. Join them when they are at a break. While sharing snacks and drink, you would have most authentic smile and sincere talk. It takes them months to complete the circuit by prostrating around the entire lake, which is 360 kilometers in circumference. 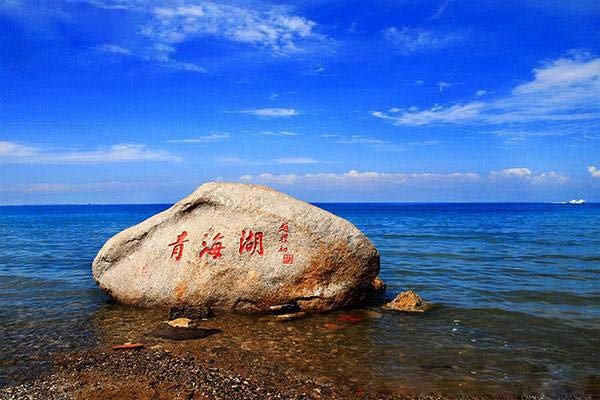 It is located 200 kilometers southwest of Xining, the capital city of Qinghai Province. Buses and mini-van taxis depart Xining daily to Qinghai Lake. Roads of this route are well conditioned, crossing through grasslands and farmlands of lushness. The lake is at altitude of 3193m, with length from east to west 104 kilometers, and width from north to south 62 kilometers. Around 40 rivers nearby supply water to Qinghai Lake, which contributes the main water source, resulting in a water volume of 73.9 billion cubic meters together with effects of precipitation. The surrounding is a half-pastoral, half-agricultural area, with 70% inhabitants as Amdo Tibetan, the rest 30% comprising of 11 ethnicities including Han Chinese, Hui people, Mongols, Tu people, Man ethnicity, Sala ethnicity, etc.

Qinghai Lake used to be a must stop in Ancient Silk Route, of which the north bank and south bank serve as two sections of old silk routes. In modern world, Qinghai Lake provides an important venue for international and national cycling competitions. Since 2002, Cycling Tour of Qinghai Lake has been held annually in between June and August. It is certified as a UCI/2. HE race. Summer has also believed as the best season to tour Qinghai Lake because of the mild climate and massive blooming of bright yellow rapesflowers. For normal cycling fanatics, to rent a mountain bike is very convenient in the major towns around the lake. Normally it takes 4 or 5 days to complete the cycling tour around the entire lake, during which, there are tent guesthouses or hostels for overnight accommodation.

Ranwu Lake is also known as Rawok Lake. It is in Basu County, Chamdo Tibetan Prefecture, TAR, which is part of historical Kham Tibet. It is an avalanche lake formed by landslips, located right along famous No.318 National Express Basu Section, which is renowned as Chinese most beautiful route. In north of Ranwu Lake stands the famous Lagu Glacier, stretching all the way to the lakeshore. The melting water from the glacier is the main water source for Ranwu, nurturing the meadows and farmlands at the lakeshore. In the middle of the surrounded mountains are dense forest. Amid the further upper part grow azaleas and shrubs. The peak is covered by snow all year round. 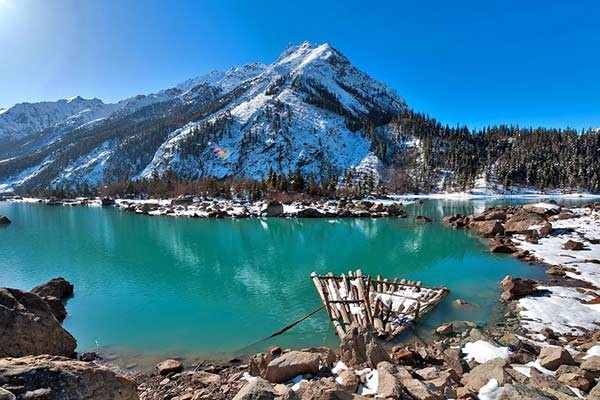 Ranwu Lake is also an alpine lake of central Tibet, at 3807m above sea level. It is the headwater of Parlung Tsangpo River and the largest lake in east Tibet. The total area is 27 square kilometers. In a long and narrow shape, Ranwu Lake resembles strings of beads. The scenic area is divided into three sections locating in the upper, middle and down streams respectively. Its length is 26 kilometers and the average width varies from 1 to 5 kilometer.

Ranwu Karst Cave is 5 kilometers from Ranwu Lake, sitting half way up in Mount Nangazuo. Plentiful prayer flagpoles and marnyi stones, are spotted throughout the mountain. Mount Nangazuo is the holy mountain for local Kham Tibetan. A statue of Maitreya Bodhisattva is placed in the entrance of the karst cave. Stalactites in the cave, rocks and trees shaped bizarrely, making Ranwu Karst Cave an enigmatic place.

Ranwu Lake is reputed as one of the photography heavens in Tibet. The best time to tour and photograph is May and June. Clear and sunny days are often surprising visitors, with trifle ruffle on the surface, the lake is tranquil and placid, giving her an elegant composure. Sinking in the beauty of the scene, the images are also captured for reminiscence years later. The unique architecture in Ranwu area features wood houses of local Kham Tibetan. Wa Village, is the best place to explore the architectural beauty, which is only 10 kilometers away from the lake.

The village houses are of typical style from eastern Tibet, using massive wood materials not only on the main structure but also to the roof. The black and shining appearance of these cottages give them a vintage taste and soothing atmosphere of serenity.

Lakes of Jiuzhai Valley in Sichuan part of Kham Tibet

Very unlikely a protest will be provoked if waters of Jiuzhai Valley are called the most beautiful in Sichuan Province. Some loyal lovers may even praise her as the prettiest in China. There used to be 9 Tibetan villages dwelling in the mountain here. That’s how the name Jiuzhai came into being. In Chinese, Jiu means nine, and Zhai means villages.

Home to 108 lakes in various shapes and colors, Jiuzhai Valley is also abundant in overlapping falls and colorful coniferous forests. So delicate a beauty, she is definitely worth a visit, though the exceeding population of tourists could reach 30,000 a day in peak month of October, which can put off many visitors who fancy tranquility. 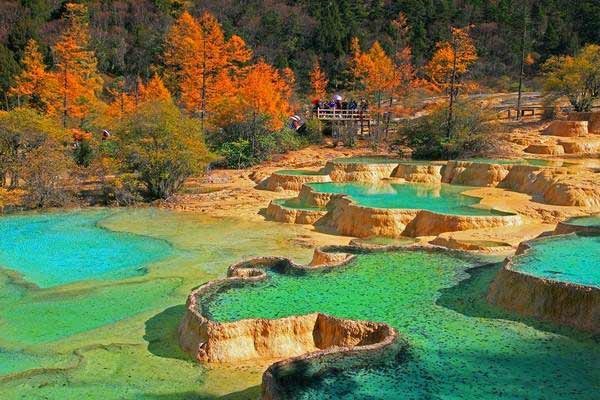 Located in Zhangzha Town, Jiuzhai County, Aba Tibetan and Qiang Autonomous Prefecture of Sichuan Province, Jiuzhai Valley is around 420km northwest of Chengdu, the capital city of Sichuan. It's in the transition zone between Qinghai-Tibet Plateau and West Plateau of Sichuan; and where the mountain range meets Sichuan Basin as well. The average altitude of Jiuzhai Valley Scenic Area is 3000m, with the low of 2000m and the high up to 4500m.

Jiuzhai Valley is China’s first national nature reserve set up for preservation and conservation of natural landscape and wild animals indigenous to this area. It is also one of China’s earliest listed UNESCO World Heritage Sites and National Geopark. The total area is around 70 square kilometers, with 80% covered by forests.

Though established to protect the biodiversity and ecosystem, tourism in Jiuzhai Valley has been a severe challenge for the environment. The Administration Bureau of Jiuzhai Scenic and Historic Interest Area was formed in 2006, to relief the concern of preserving the “nature museum”. Many research activities have been undertaken by national and foreign institutions. Strict limit to tourist population has been made. After the 7-magnitude earthquake stroke Jiuzhai Valley in August, 2017, currently only partial scenic area is open to public and at most of 2000 visitors are allowed entrance daily.

Related articles
Difference Between Tibet Autonomous Region and Tibetan Areas Tibet is a geographical concept which consists of different regions inclusive of Tibet Autonomous Region (TAR), Amdo Tibet and Kham Tibet. But traveling to Tibet generally refers to a trip to Tibet Autonomous Region. This article explains the difference between TAR and other Tibetan Areas.
Lakes in Central Tibet (Tibet Autonomous Region) Tibet is a land with thousands of beautiful lakes. The three holy lakes in Tibet are Yamdrok Lake, Namtso Lake, and Manasarovar Lake.
Mountains on Tibetan Plateau Home to the highest mountains and peaks in the world, Tibet got the name “the roof of the world”. There are 44 mountains in Tibet including Mount Everest and Mount Kailash. Many of these mountains are worshipped as holy land of gods or goddesses. Their existence provides spiritual support to Tibetans.
Highland Barley on Tibetan Plateau Tibet barley started to be cultivated on Tibetan Plateau, found in the area with an altitude above 3400m. This crop is the key factor that enabled Tibetan people to reside on Tibet Plateau. Tibet barley also contributes the main ingredient of tsampa, which is a typical staple food in Tibetan people’s daily diet.
Hot Springs in Central Tibet (Tibet Autonomous Region) Tibet is a land with hundreds of hot springs. The most famous and popular hot springs in Tibet are Yangpachen Hot Spring, Tidrum Hot Spring, and Riduo Hot Spring.
Vegetation on Tibetan Plateau From southeast to northwest of Tibet, montane forests, alpine meadows, alpine grasslands or steppes, semi-deserts or alpine deserts are distributed with a clear pattern of zonation, which is quite different from other parts of inland China, or the neighboring countries. This article is an introduction to vegetation in Tibet.