The Sacred Lakes and Hidden Beauties in Central Tibet

Tibet is a lucky and blessed land with thousands of beautiful lakes. They are like thousands of stars luminating in the rising and falling plateau. The renowned ones are like the prominent stars in the sky. The less known by the world are being hidden beauties where are usually remote and secluded.

The three sacred lakes worshiped and loved by Tibetan Buddhists and local folks are also the three most famous lakes in TAR among global tourists. They share the reputation of being pretty, elegant deities with religious significance. Pilgrims travel thousands of kilometers to pray and cleanse. A quick review of the three lakes are as below:

Namtso Lake is 240km north of Lhasa, in Damxung County, Ngachu Prefecture, TAR. With a cover area of 1920 square kilometers, Namtso ranks the second largest lake in Tibet, and the third largest saline lake in China. The deepest point of Namtso was measured as 120m according to the newest discovery. Its storage capacity is around 77 billion cubic meters, in addition with the altitude of 4,781m, making Namtso the highest saline lake in the world. The indigenous religion of Tibetan people, Bon, is traced back to be originated from Namtso, sharing the reverent with another important Bon sacred lake Tangra Yumtso, in west TAR.

YamdrokLake is 70km southwest of Lhasa, in Nagarzê County, Shannan Prefecture, TAR. The altitude is 4,441m. With a total area of 675 square kilometers, Yamdrok Lake is the largest inland lake in the northern part of Himalaya in Tibet. Unlike a typical lake, Yamdrok has a shape of stretching corals, while some think it look like a scorpion from the bird’s view. In clear days, the water reflects the color of sky, sheltered part by the clouds above and the mountains surrounded, Yamdrok is beautiful as a blue gem with harmonious arrangements of sapphire, aquamarine, and light blue. As one of the three sacred lakes, Yamdrok is loved by both Tibetan devout and also tourists. 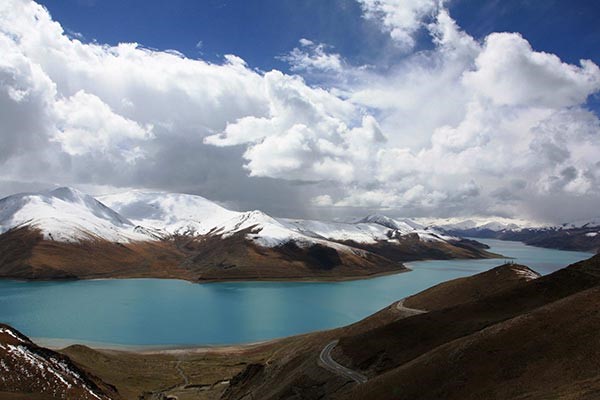 Lake Manasarovar is located 35km east of Purang County, Ngari Prefecture in TAR. It is right in the valley between Mount Kailash and Mount Naimona’nyi, with an altitude of 4,590m. Manasarovar is a fresh water lake with a huge storage capacity ranking No.2 in China. Together with Namtso, Yamdrok, Manasarovar is reputed as sacred lake for Tibetan Buddhists. The name Manasarovar means victory and undefeated, given by the religious historic story that Tibetan Buddhism defeated Bon religion in the battle field of Manasarovar. Eight monasteries in the four directions of Manasarovar take care of the lake. Every summer and autumn, pilgrims come to the lake and do the kora of 60km in length, which takes 4 to 5 days to complete, during which the temples at the lakeshores can offer temporary accommodation for pilgrims.

The fourth sacred lake and the two with inauspicious names

Tangra Yumtso Lake is in the wilderness of Nyima County, Ngachu Prefecture, TAR. With an area of 8220 square kilometers, it is the fourth largest lake in Tibet, but the deepest one with the deepest point over 210m. The lake is 250km in circumference. Though the altitude here is over 4,528m, agriculture in the lake area is comparatively developed, Tibet barley, potato, rapesflower, and Chinese cabbage all adapt well to the climate and soil. This makes Tangra Yumtso a wonder for farming. The agricultural richness is believed to be the key reason that the legendary Xiangxiong Kingdom originated from here.

The religious importance of Tangra Yumtso lies in the status of being the holy lake for the oldest religion for ancient Tibetan, Bon religion. Believed as the cradle of Xiangxiong civilization 18,000 years ago, which is far before the Tubo Kingdom period, Tangra Yumtso had been a remote spiritual center for most Tibetan before, visited mostly by pilgrims in summer and autumn, before tourism boosted in recent decades. Now it’s an accessible scenic for tourists as well.

There is a small village at the lakeshore. Their farmlands have unique names such as “tail of fox”,” the place where moon rises from”, given by the local villagers, indicating their love for the land and joy for its fertility.

Though Tangra Yumtso was first as the holy lake for Bon religion. Tibetan Buddhists also come to the lakeshore and do the kora around the lake. The way to distinguish the belief of followers from the two religions is observing the direction in which they do the trekking or prostration circuit. Bon followers do the kora in anticlockwise direction, while Tibetan Buddhists in clockwise direction.

It had been thousands of years before this lake got its reputation swung. Yet secluded, Tangra Yumtso, is where the oldest civilization of Tibet generated from. In a cave built inside one cliff of the shore, still locates Yuben Temple, allegedly as one of the oldest temples of Bon religion. Yuben Temple enshrines the goddess with wolf face, still visited by pilgrims and

Siling Lake is located in the southern part of Changthang Plateau, Ngachu Prefecture, in northern TAR. It used to be the second largest lake in Tibet and the third largest saline lake in China. After a flood in 2014, it had been greatly broadened. With a current area of 2,391 square kilometers, it is now the largest lake in Tibet and the second largest saline lake in China. The expansion of the lake had been nearly two decades. There used to be villages on the south bank. During the expansion, water swallowed the fences, forcing the land retreat backwards and finally sank the houses of the herdsmen.

Not as lucky as the three sacred lakes or Tangra Yumtso, Siling is regarded as devil lake. This name means “devil lake kindled by twilight” in Tibetan. It is said that the devil named Siling was captured by merciful gods and was sentenced to be confined in the lake as a punishment and a way to prevent him from further convicts. Looking down to Siling from a bird’s view, the surface of the lake looks severe and grave with intense blue. Though with least reputation in religious status, Siling is actually home to many precious wild animals. It is the biggest habitat for black-necked cranes. Besides, snow leopards, Tibetan antelopes, Tibetan wild mules, Tibetan snow chicken, and argali sheep are also residing in this area. A peculiar fish Gymnocypris selincuoensis is the only kind of fish living in Siling Lake. Since 2003, Siling Lake has been a National Nature Reserve.

Siling is no less charming than any lake in Tibet. Entrance fee is not required to sightseeing. It has become more and more appealing to explorers. Though accessible, the ten kilometers long road leading to Siling Lake is not in good condition and occasionally blocked by swamps making the traveling treacherous.

Lhanag-tso Lake is in Purang County, Ngari Prefecture, with an altitude of 4,574m. Geologic discovery indicates that Manasarova and Lhanag-tso used to be an entity of one lake. Close to Manasarovar, one of the three sacred lakes, without the neighbor’s popularity, Lhanag-tso may relate to Siling Lake for both being regarded as inauspicious. In Tibetan, Lhanag-tso Lake means “poisonous black lake”, more often called “ghost lake”. The dreadful name was given because the lake water is slightly saline making it drinkable for neither human nor animals. Vegetation or animals are sparsely spotted in the lakeshore. Liveliness is seldom. However, local folks believe the two lakes are still linked down underneath the ground.

The surrounding land and mountains have a tinge of red. A small island in the middle of the lake is also in red color, while the beaches are bright as silver lines. Being less famous gives the lake a sedate countenance. It’s a place for a stroll without particular purpose and for those who enjoy a roaming mind in nature.

Lhamo La-tso Lake is a very small lake with an area of roughly 1 square kilometer and confronts 7 frozen months yearly. Located 65 kilometers northeast of Jiacha County, Shannan Prefecture, TAR, Lhamo La-tso is not within an easy reach, due to its remote location and the ill conditioned roads leading to it. Therefore, this lake is less popular among tourists. When arriving at the foothill it takes another 30 minutes of trekking to reach the lookout, which can be quite physically demanding in addition with the altitude up to 5300m. Reaching the hilltop and looking down at the Lhamo La-tso, it’s like finding a hidden gem cuddled and guarded by the surrounded mountains. The religious tales add a mysterious atmosphere to Lhamo La-tso. 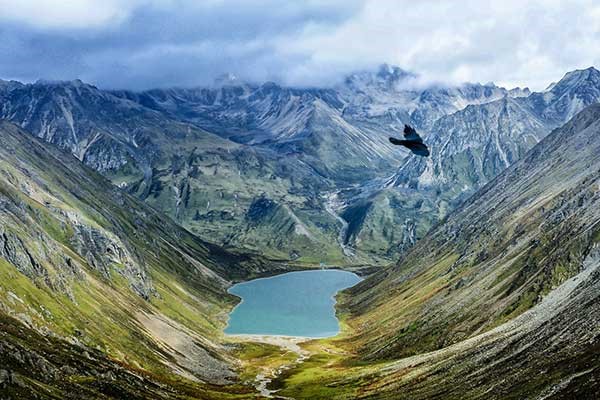 The name is made up of two Tibetan terms. Lhamo means fairy or goddess, and La-tso means surface of lake. The shape of the lake is quite a resemblance of a broad mirror, seemingly emphasize the coincidence with its nick name “magic mirror”. It was said that if you look at the surface of the lake sincerely and wholeheartedly, she will let you foresee your future from the reflection.

Lhamo La-tso's importance in Tibetan Buddhism is that when Lama or Panchen passes away, a delegation of devoted monks will be sent here to get a hint of where the soul boy reincarnated from the late Lama or the late Panchen can be found.

Related articles
Difference Between Tibet Autonomous Region and Tibetan Areas Tibet is a geographical concept which consists of different regions inclusive of Tibet Autonomous Region (TAR), Amdo Tibet and Kham Tibet. But traveling to Tibet generally refers to a trip to Tibet Autonomous Region. This article explains the difference between TAR and other Tibetan Areas.
Lakes in Amdo and Kham Tibetan Areas Amdo and Kham are geographically neighboring Tibet Autonomous Region, and have the share of similar natural landscape. The most three famous lakes in Amdo and Kham Tibetan-inhabited areas are Qinghai Lake, Ranwu Lake and Lakes in Jiuzhai Valley.
Mountains on Tibetan Plateau Home to the highest mountains and peaks in the world, Tibet got the name “the roof of the world”. There are 44 mountains in Tibet including Mount Everest and Mount Kailash. Many of these mountains are worshipped as holy land of gods or goddesses. Their existence provides spiritual support to Tibetans.
Highland Barley on Tibetan Plateau Tibet barley started to be cultivated on Tibetan Plateau, found in the area with an altitude above 3400m. This crop is the key factor that enabled Tibetan people to reside on Tibet Plateau. Tibet barley also contributes the main ingredient of tsampa, which is a typical staple food in Tibetan people’s daily diet.
Hot Springs in Central Tibet (Tibet Autonomous Region) Tibet is a land with hundreds of hot springs. The most famous and popular hot springs in Tibet are Yangpachen Hot Spring, Tidrum Hot Spring, and Riduo Hot Spring.
Vegetation on Tibetan Plateau From southeast to northwest of Tibet, montane forests, alpine meadows, alpine grasslands or steppes, semi-deserts or alpine deserts are distributed with a clear pattern of zonation, which is quite different from other parts of inland China, or the neighboring countries. This article is an introduction to vegetation in Tibet.