Home to the highest mountains and peaks in the world, Tibet got the name “the roof of the world”. Central Tibet in nowadays indicates Tibet Autonomous Region (TAR), of which the historical Tibetan name is U-tsang. Central Tibet, Kham Tibet and Amdo Tibet, constitute the entire Tibetan-inhabited area. There are 44 mountains in TAR that are open to public. Some of them are natural edges enclosing TAR, as the boundaries to the neighboring provincial units and countries. Many of these mountains are worshipped as holy land of gods or goddesses. Their existence provides spiritual support to Tibetans, as if assuring them their homeland is safely guarded and beautifully blessed.

Type: west-east mountain range
Location: north and northwest of TAR, separating TAR from Qinghai Province
Altitude: 5,500-6,000m
Length: 2,500km
Mountaineering: Mt. Ulugh Muztagh，
Description: Starting from east Pamirs Plateau, Kunlun Mountains cross Southern Xinjiang, Northern Tibet and spanning into Qinghai, connecting with Bayan Har Mountains. It is the northern edge of Tibetan Plateau and a natural border of the three provincial units Tibet Autonomous Region, Xinjiang Autonomous Region and Qinghai Province. The climate in Kunlun Mountains area shares the highland feature, frigid and arid. Seldom influenced by Indian Ocean or Pacific monsoon, in reverse, this area is under constant affect of continental air mass, causing huge ups and downs of annual temperature and daily temperature. The most arid district has an annual precipitation of less than 50mm, larger as 100mm to 130mm in the higher altitude of mountain body. The snowline is above the altitude of 5,600m to 5,900m, where there are around 3,000 square kilometers of glaciers, whose melting water are the sources of China’s biggest rivers, Yangtze, Yellow, Mekong, Salween and Tarim. This is a sparsely inhabited area, almost improbable for tourist’s activities. Nevertheless, Mt. Ulugh Muztagh((6,987m), the main part of the provincial border line, sitting remote and far in the range, has an irresistible charm for adventurers. It was first climbed and summitted in 1985 by a Sino-American mountaineering team. Ever since, Kunlun Mountains have been fascinating mountaineering spots for top mountaineers.

Type: west-east mountain range
Location: middle north of TAR, separating TAR from Xinjiang and Qinghai
Altitude: 5,000m
Length: 400km
Description: Koh Xil Mountains are in the middle part of the northern border between Xinjiang and Tibet. The main body of Koh Xil range, with an area of 83,000 square kilometers, is in Qinghai Province. Koh Xil is a Mongolian name that means Green Ridges. The range has the typical plateau topographic features, with frozen hills, rock wreaths, ice tents which merely exist in glaciers and frigid zones. Besides, variations of lakes, and wetlands are also spread over. It has not only magnificent view but also invaluable biodiversity. To protect the endemic wild animals in Koh Xil, the former provincial nature reserve had been upgraded as National Nature Reserve in 1997. The entire reserve is with an area of 45,000 square kilometers, thus the largest and the highest nature reserve in China. Mammals such as Tibetan antelope, wild yak, Tibetan wild donkey, Tibetan gazelle are all coinhabited in Koh Xil. In 2017, Koh Xil National Nature Reserve was announced as the 51st world heritage in China by UNESCO. Later in November of 2017, a joint announcement issued by authorities from Koh Xil, Mt. Alkin, and Tibet Chang-Tang Reserve, to strengthen the preservation in this area with the clear content that no illegal trespassing into or crossing the reserve is allowed by any unit or individual. In the reserve, there currently exist around 202 species of advanced plants, belonging to 30 families, 102 genus, most of which are short herbs, cushion plants. A few species of ligneous plants can also be found such as creeping junipers, cushion mountain ephedra. Meanwhile, most of them are indigenous to Qinghai-Tibetan Plateau. As to animals of Koh Xil, there are 230 species comprising of 30 mammals,56 species of birds, among which Tibet wild yak, Tibet antelope, Tibet wild donkey, white-lip deer, and brown bear are endemic to Qinghai-Tibetan Plateau. 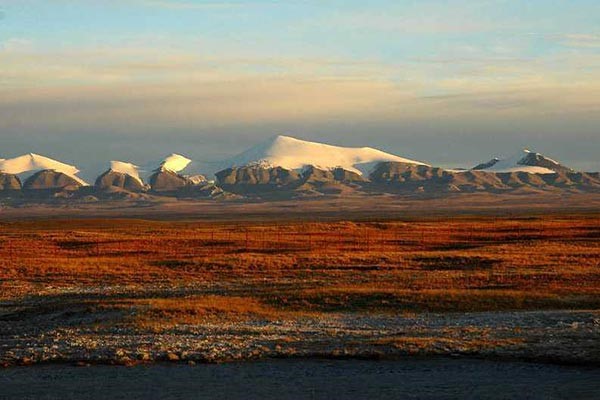 Type: west-east mountain range
Location: northeast of Tibet, separating Tibet from Qinghai
Altitude: 6,000m
Length: 700km
Attractions: Mt. Geladandong
Description: The west part of Tanggula Mountains is within TAR, while the eastern Tanggula Mountains are the boundary between TAR and Qinghai. Southeastern Tanggula connects Hengduan Mountains. Yangtze River, Lantsang River, and Salween River spring from the south and north faces of Tanggula Mountains. The highest peak in this range is Mt. Gelandandong (6,621m). This peak is an ideal place for adventure tourism, mountaineering, and scientific expedition. Mt. Geladandong is an alpine glacier complex, home to seracs that are up to 70 meters high, coming in shapes of crystal buildings, sharp swords or bluish jade pillars. In summer and autumn, while the mountain tops are still covered with snow, the foothills are decorated with wildflowers, as if all seasons’ wonder are presented at a same time. One of the main rivers that supply waters to Yangtze River, Tuotuo River is originated from Mt. Geladandong.

Type: west-east mountain range
Location: within TAR
Altitude: 6,000m
Length: 1,400km
Attractions: Namtso Lake
Description: Nyenchen Thanglha are typical block mountains. The entire range is in TAR, crossing through the middle and eastern TAR. The name of the highest peak shares the name of the range, namely Mt. Nyenchen Thanglha (7,111m), and is renown as part of the Namtso Lake Scenic Spot. As recorded in Bon religion’s historical books, Mt. Nyenchen Thanglha, is one of the three holy mountains; the rest two are the famous Mt. Kailash and Mt. Maji. The range is also the largest glacier area among southeast of Qinghai-Tibetan Plateau. The religious tale about this mountain said he is the husband of Lake Namtso. This match of holy mountain and sacred lake is as famous as the other two matches: Mt. Noijin Kangsang and Lake Yamdrok; Mt. Kailash and Lake Manasarovar. This scenic combination is pleasant to visit for sightseeing most time, except in winter from November to March, the heavy snow period, and summer from May to September, the rainy season. 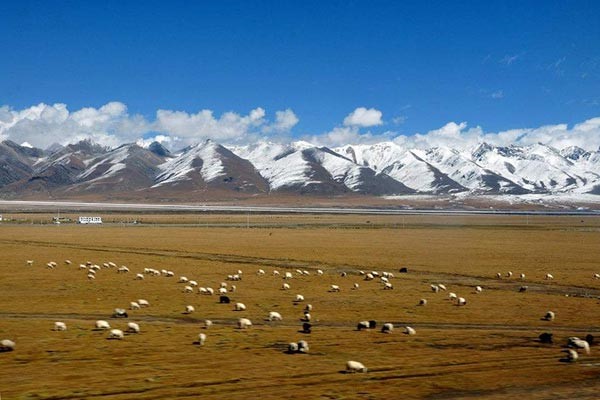 Mount Range in Southwest of TAR

Type: west-east mountain range
Location: west and southwest of TAR, bordering India
Altitude: 6,000m
Length: 1,100km
Attractions: Mt. Kailash, Lake Manasarovar; Mt. Naimona’nyi, Lhanag-tso Lake
Description: Gangdise are folded mountains, the name of which means “owner of mountains” or “axle of the world”. The highest peak in this range is Mt. Lunpo Gangri (7,095m); the second highest is the famous Mt. Kailash, believed as the mutual origin of multiple religions by followers of Tibetan Buddhism, Bon religion, Jainism and Hinduism. April in Tibetan calendar is when pilgrims from Tibetan-inhabited area, Nepal, India jointly celebrate the month-long festival Saga Dawa. The 52-kilometer-long “Kora” around Mt. Kailash is the most important ritual for the most devout and determined pilgrims. Erecting a new prayer flagpole and sutra chanting are also important parts of the festivities. Saga Dawa Festival usually falls in the month of May or June in the international calendar. Though the northern part of Gangdise has frigid climate of Tibet Plateau, the southern part is blessed with milder and warmer climate in the valley area, providing fertile farmland and sufficient precipitation for Tibet barley. 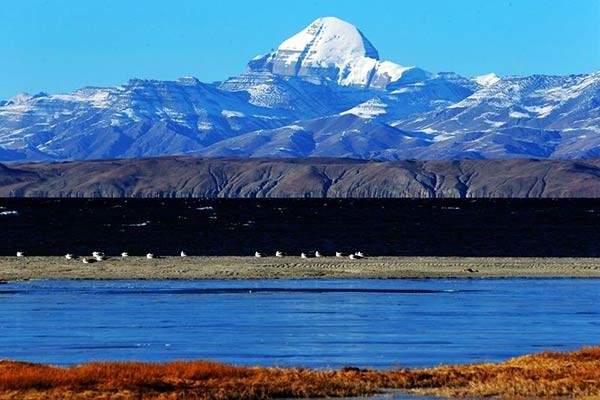 Type: west-east mountain range
Location: south of TAR, as border with India, Nepal, Bhutan, Sikkim, Pakistan
Altitude: 7,000m-8,000m
Length: 2,450km
Attractions: Mt. Everest
Description: In Himalaya Mountain range, there are more than 110 peaks higher than 7,350m. It is undoubtedly the highest range in the world, with Mt. Everest (8,844m) as the world’s highest peak. Tibetan part of Mt. Everest is in Tingri County, under the jurisdiction of the second largest city Shigatse. This famous peak has attracted tourists and mountaineering fanatics all over the world. Besides functioning as one of the world’s famous mountain view scenic spot, this precious pure land is also a shelter and sanctuary to its indigenous animals and vegetations. Everest Nature Reserve was established in 1988 to protect the unique and fragile environment. The reserve is divided into three regions, the core zone, transition zone, and experimental zone. The core zone covers 10,325 square kilometers, constituting 30.3% of the reserve. The transition zone, with an area of 6,255 square kilometers, has 18.6% of the entity. The experimental zone is 16, 561 square kilometers, slightly over half of the reserve. The newest policy for tourism in Mt. Everest area has made a clarified announcement in February 2019, that the core zone is forbidden from tourism activity, resulting in the relocation of Everest Base Camp, by retreating it 2 kilometers to the new site across from Rongbuk Monastery. The exception is only for those with permits to enter the core zone for experimental purpose or mountaineering. 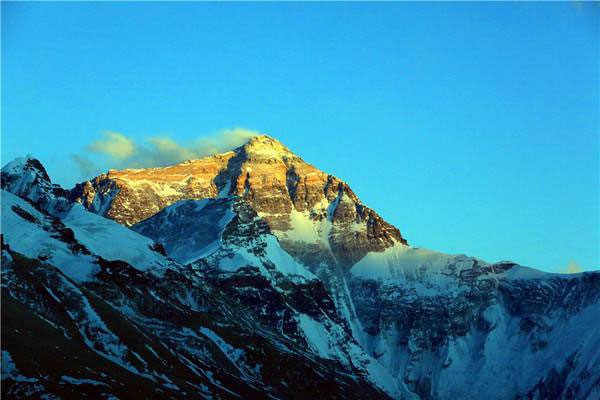 Mountains in East of TAR

Type: south-north mountain range
Location: east of TAR, as border with Sichuan, Qinghai, Yunnan
Altitude: 4,000m-5,000m
Attractions: Mt. Gongga, Mt. Namjag Barwa.
Description: Hengduan Mountains are actually a complex of mountain ranges. It is China’s longest, widest, and most typical south-north mountain range. The name Hengduan is a Chinese term, that means cutting off and blocking, indicating the existence of these mountains block the transport between the west and east. The highest peak of this range is Mt. Gongga (7,556m), locating in Sichuan Province, and famous for alpine lakes and glaciers. The other famous mountain Mt. Namjag Barwa (7,882m) is at the west end of Hengduan Range, connecting the east Himalaya. It is the highest peak of Nyingchi Prefecture, TAR. With the distinctive forest and valley view, it is honored as the most beautiful mountain in China.

Related articles
Difference Between Tibet Autonomous Region and Tibetan Areas Tibet is a geographical concept which consists of different regions inclusive of Tibet Autonomous Region (TAR), Amdo Tibet and Kham Tibet. But traveling to Tibet generally refers to a trip to Tibet Autonomous Region. This article explains the difference between TAR and other Tibetan Areas.
Lakes in Central Tibet (Tibet Autonomous Region) Tibet is a land with thousands of beautiful lakes. The three holy lakes in Tibet are Yamdrok Lake, Namtso Lake, and Manasarovar Lake.
Lakes in Amdo and Kham Tibetan Areas Amdo and Kham are geographically neighboring Tibet Autonomous Region, and have the share of similar natural landscape. The most three famous lakes in Amdo and Kham Tibetan-inhabited areas are Qinghai Lake, Ranwu Lake and Lakes in Jiuzhai Valley.
Highland Barley on Tibetan Plateau Tibet barley started to be cultivated on Tibetan Plateau, found in the area with an altitude above 3400m. This crop is the key factor that enabled Tibetan people to reside on Tibet Plateau. Tibet barley also contributes the main ingredient of tsampa, which is a typical staple food in Tibetan people’s daily diet.
Hot Springs in Central Tibet (Tibet Autonomous Region) Tibet is a land with hundreds of hot springs. The most famous and popular hot springs in Tibet are Yangpachen Hot Spring, Tidrum Hot Spring, and Riduo Hot Spring.
Vegetation on Tibetan Plateau From southeast to northwest of Tibet, montane forests, alpine meadows, alpine grasslands or steppes, semi-deserts or alpine deserts are distributed with a clear pattern of zonation, which is quite different from other parts of inland China, or the neighboring countries. This article is an introduction to vegetation in Tibet.