Brief Introduction to Vegetation in Tibet

Named as Land of Snow and Roof of the World, Tibet may give many of us an impression that this land is covered by snow, with barren ground and wind-swept mountains. The image of green may seldom occur to our mind. Well it is part of the truth, but not for the entity of Tibet. After many researches on Tibet’s vegetation, a clarified trend of the gradually changing variation and distribution of Tibet’s vegetation has been discovered. From southeast to northwest of Tibet, montane forests, alpine meadows, alpine grasslands or steppes, semi-deserts or alpine deserts are distributed with a clear pattern of zonation, which is quite different from other parts of inland China, or the neighboring countries. Researchers then decide to study Tibet’s vegetation as a unique unit, namely high plateau vegetation.

Most forested area of Tibet is in the southeast, where the landscape features river-gorges, with forests and mountain-edged meadows. This forestry region is one of China’s three large forestry regions; the other two are the Northeast Forestry Region bordering Mongolia and Russia and the South Forestry Region located east of Yunnan-Guizhou Plateau .

Though Tibet’s main forest type is coniferous forest. In the southeast of Tibet and the eastern Himalaya, montane broad-leaf forests are found in small dispersed groups. Tibet’s forest is concentrated in Hengduan Mountains area and Yarlung Tsangpo River-gorge region, under the jurisdiction of Nyingchi Prefecture, TAR. This forestry region is also the natural boundary between Tibet and Sichuan Province, belonging to the historical Kham Tibet. 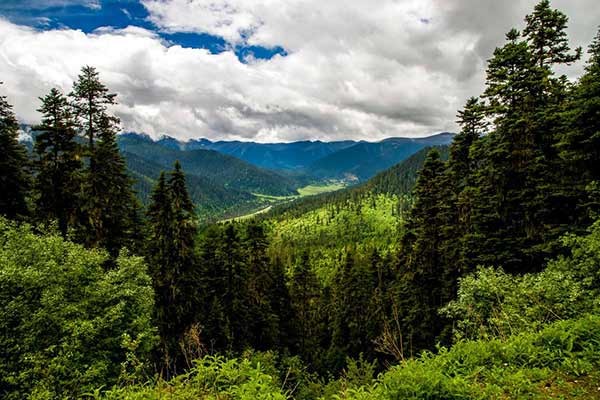 It is roughly 450 kilometers from Indian Ocean in the south. On the transition zone between Qinghai-Tibet Plateau and the South Asia Continent, Hengduan Mountains, the largest south-north mountain range and long narrow valleys open the gateway to the warm and mild current from Indian Ocean. Warm monsoon coming from south rises towards the trend of land, bringing ample rainfalls and moist fogs, perfect for growth of great trees. The warm climate even makes it possible for trees to grow at the high-altitude area. In Medog, even typical tropical plant plantain can grow well.

Primeval forests are many concentrated in and around Bomi, Medog and Nyingchi. The entire storage of wood volume amounts to 1,3 billion cube meters. Looking at a satellite map of Tibet, the southeast is prevailed by dominant green, compared with the gradually changing colors of yellow, orange, or brown in the rest of Tibet.

The rate of forest coverage makes up 10% of entire Tibet area, among which alpine shrubs, mountain-edged meadows are also abundant.

Multiple Types of Grasslands in Tibet

On the transition zone between the southeast forested area to the westmost desert area, vast grasslands are spread in central Tibet, inclusive of regions near Lhasa, Shannan, Shigatse and Nagqu. According to the statistics of published journal on Tibet’s grassland, there are in total 17 types of grasslands, making Tibet a microcosm of China’s grasslands, among which alpine meadows, montane steppes, montane shrub steppes are the dominant ones.

Shrubberies are scattered nearly in all areas of Tibetan Plateau. In southeast of Tibet, the main types of shrubs are leathery leaf evergreen shrubs, coniferous evergreen shrubs, broadleaf deciduous shrubs, where azaleas, creeping pines and caraganas are growing because of the moist and warm climate. In arid valley area and desert area of Tibet, are only feasible for growth of those tolerant to dry climate and barren soil, such as prickly shrubs and saline shrubs. 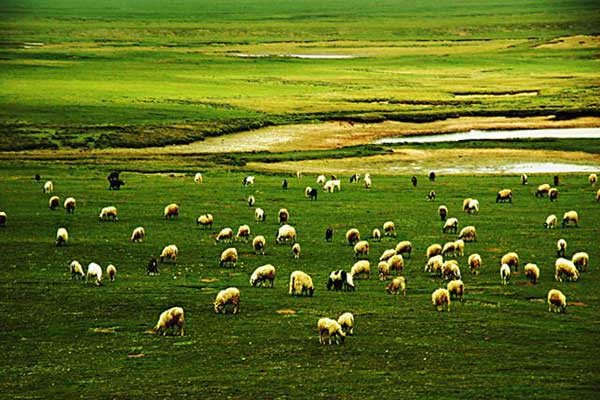 The most famous grassland in Tibet is Changtang Grassland, edged by Gangdise Mountains, Kunlun Mountains and Tanggula Mountains. It is Tibet’s largest natural pasture land, and one of the five biggest pasture lands in China, with the rest four in Xinjiang, Inner Mongonia, Gansu, and Qinghai. It includes nearly two entire prefectures, Nagqu in the north of Tibet and Ngari in the west of Tibet. Diversity of plant species is comparatively single in Changtang region. Though there are around 400 advanced plants, among which, stipa purpurea is the main one constituting the regional frigid meadow.

Tibet’s deserts are mainly in the jurisdiction of Ngari Prefecture, TAR. This region is semi-arid and extremely arid. From 1970s to 1990s, China’s first scientific expedition used to study the vegetation and its zonation in Tibet. But due to the transportation limits, there were no data collected about some parts of Changtang Region. Since September, 2017, a team of scientists had entered Ngari Prefecture again, to continue the field study to fill in the gaps left decades ago, which is believed to finish in 5 or 10 years. 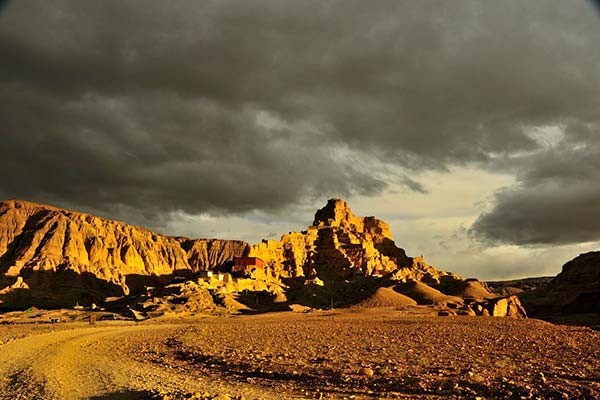 The Ruins of Guge Kingdom in Ngari Prefecture

Ngari has had a name of “land of no life”, indicating the severe climate and harsh environment. Residents were not used to the view of green trees. The indigenous plants including shrubs such as tamarisk and some feathery flowers and Rhodiola plants.

To carry on reforestation has become the priority of the local government. Ngari Government has implemented methods of grazing prohibition and forest plantation. After the experimental planting of trees that were selected to be trial species to test their drought resistance capacity and adaptability to the barren and saline land in Ngari, during the past 3 years, around 20 kinds of trees have been grown on a large scale. These trees are both exotic and indigenous to Qinghai-Tibetan Plateau. They are comprising of Salix tomentosa(a kind of willow), poplars from Xinjiang and Qinghai, Sophora japonica (also named Chinese scholar trees), spruce and cedar. Besides, herbal flowers such as coreopsis, hollyhock and stonecrops are also planted excessively. The once-barren gobi deserts are now being converted with green belts built by Ngari residents.

Indigenous plants in the deserts: kobresia parva; plants belonging to the genus Rhodiola

In 2009, the Wild Plant Protective Law had been introduced by the government of Tibet Autonomous Region to regulate the collection and exploitation and strengthen the preservation and conservation of the plants indigenous to Tibet. As to the protection of Tibet’s most renowned medicinal herb, caterpillar fungus, a specific method has been made in 2006, of which the important content is that only those with licenses can carry on legal collections and proper tools should be used in order not to damage the soil.

Tibetan people have been always grateful for the gift of nature that their gods bless them with. They follow the tradition of farming and grazing passed down generation after generation, that limits the harm to the land and rotate the using of lands to let them recover. In the modern world, though mass production of crops is demanded due to the increasing population of residents and tourist, the locals are still keeping the reverence and love for their land in their daily life. Talk to your Tibetan tour guide or the smiling people you may just meet by chance, you may know the land in a closer way and how the vegetation breed them up and nurture their tender heart.

Related articles
Difference Between Tibet Autonomous Region and Tibetan Areas Tibet is a geographical concept which consists of different regions inclusive of Tibet Autonomous Region (TAR), Amdo Tibet and Kham Tibet. But traveling to Tibet generally refers to a trip to Tibet Autonomous Region. This article explains the difference between TAR and other Tibetan Areas.
Lakes in Central Tibet (Tibet Autonomous Region) Tibet is a land with thousands of beautiful lakes. The three holy lakes in Tibet are Yamdrok Lake, Namtso Lake, and Manasarovar Lake.
Lakes in Amdo and Kham Tibetan Areas Amdo and Kham are geographically neighboring Tibet Autonomous Region, and have the share of similar natural landscape. The most three famous lakes in Amdo and Kham Tibetan-inhabited areas are Qinghai Lake, Ranwu Lake and Lakes in Jiuzhai Valley.
Mountains on Tibetan Plateau Home to the highest mountains and peaks in the world, Tibet got the name “the roof of the world”. There are 44 mountains in Tibet including Mount Everest and Mount Kailash. Many of these mountains are worshipped as holy land of gods or goddesses. Their existence provides spiritual support to Tibetans.
Highland Barley on Tibetan Plateau Tibet barley started to be cultivated on Tibetan Plateau, found in the area with an altitude above 3400m. This crop is the key factor that enabled Tibetan people to reside on Tibet Plateau. Tibet barley also contributes the main ingredient of tsampa, which is a typical staple food in Tibetan people’s daily diet.
Hot Springs in Central Tibet (Tibet Autonomous Region) Tibet is a land with hundreds of hot springs. The most famous and popular hot springs in Tibet are Yangpachen Hot Spring, Tidrum Hot Spring, and Riduo Hot Spring.