Compared with the majority of Tibet, Nyingchi has more rainfall and larger forest coverage rate. The climate type of Nyingchi region is Tropical humid and sub-humid climate, whereas the majority of Tibet is under the influence of Qinghai-Tibet Plateau/Alpine climate. The lower part in the southeastern Nyingchi opens a giant gap, allowing the warm current from Indian Ocean to come and stay in the vicinity, which brings forth ample rainfall. Therefore, Nyingchi has an annual precipitation of about 682 mm. The average annual temperature is 8.7℃. More rainy days in Nyingchi indicate fewer sunshine hours. That explains why the sunshine hour amount of Nyingchi(2,022 hours), is about 1,000 hours less than that of Lhasa(3,000 hours). The frost-free season of Nyingchi is 180 days long.

Unlike the rest of Tibet, Nyingchi has distinct four seasons and relatively warmer and wetter weather. There are eight months with the average low above freezing point. And the annual humidity is ranged from 44% to 70%, which meets the body-comfort index almost throughout the year. UV radiation is still strong, but weaker than that in Lhasa or Shigatse.

Spring is mild and pleasantly warm, with the average temperature ranging from 3℃ to 16℃; And the seasonal precipitation is 75 mm.

Summer is cool and humid, with the average temperature ranging from 11℃ to 21℃; And the seasonal precipitation is 382 mm.

Autumn is slightly warmer and wetter than spring, with the average temperature ranging from 4℃ to 17℃; And the seasonal precipitation is 153 mm.

Winter is cold, dry and windy, with the average temperature ranging from -4℃ to 9℃; And the seasonal precipitation is just 7 mm.

Summary based on the above table:

Best Time to Visit Nyingchi Based on Weather and Trip Types

Flower Viewing Trip: Spring outing is the most popular tourist activity in Nyingchi. Spring is actually the busiest travel time for Nyingchi, because the diverse flowers come into bloom one after the other. The pretty light pink peach blossoms earn the greatest reputation for Nyingchi. Snow-like white pear flowers, multiple-colored alpine azaleas, are also fascinating creatures hidden in the river valley areas or among the mountains.

Summer Hideaway: With the pleasantly cool temperature and rising level of oxygen in summer, traveling to Nyingchi during summer can help with acclimatization to high altitudes. Those who don't like stuffy summer heat, can feel relieved here.

Mountain sightseeing is best to be done in autumn in Nyingchi. About two thirds of the possibility to have a clear view of Mount Namcha Barwa happen in autumn.

Winter is the quietest time of Nyingchi travel. It rarely rains but snows much. If snow and quietness is what you adore, this is the right time to visit Nyingchi for you.

Conclusion: If you're taking a road trip to or near Nyingchi, we'd advise that you keep looking out for landslide from heavy rain in summer and low visuality from heavy snow in winter. However, in general, it's suitable to travel Nyingchi all the time. 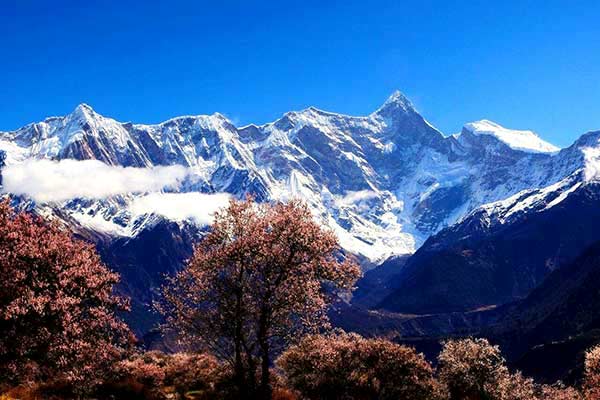