Located about 90 kilometers west of Gongbo'gyamda County, the Basumtso Lake (known as Basongtso Lake in Chinese) is an alpine lake at the middle and upper reaches of the Ba River, which is the largest tributary of the Nyang River. Basumtso Lake is surrounded by mountains, and its climate is mild. The snowy mountain, the crystal lake, the lush trees, the monastery and the villages make up a perfect paradise. 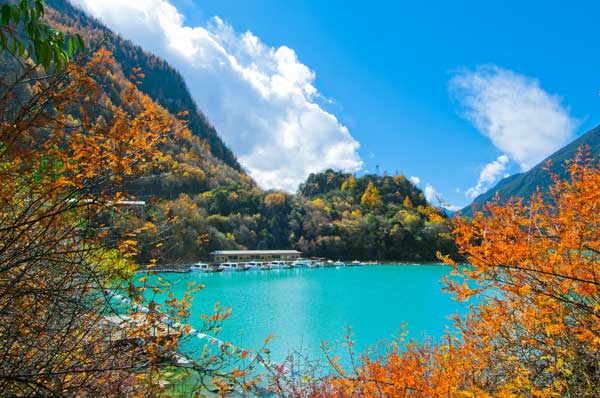 Basumtso Lake
The lake surface is on average about 3,538 meters above sea level. The lake covers an area of 25.9 square kilometers. The deepest part is about 60 meters from the surface. The blue, limpid lake water and the verdant mountain around the lake combine into a charming scene that can be compared with those in Switzerland.

In summer and autumn, when flowers bloom and the air is filled with their fragrance, bees and butterflies are seen shuttling and fluttering among them. Bears, leopards, goats, musk deer, Tibetan snow roosters and other wild animals look for food and sport in the forest. An islet in the center of the lake is an enormous "sheep-back stone" left by glaciation eons ago. Following the direction of the glacier's movement, one can discern distinct traces. On the islet stands a monastery of the Yellow Sect, which was built in the 17th century. 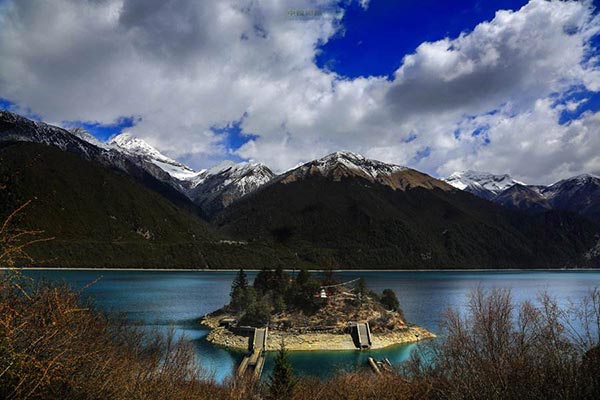 View of Basumtso Lake with Tashi Island
Going upstream from the Basum Lake to the source of the mainstream and the tributaries, one can see large mountain glaciers. With abundant snow, the long tongues of the lakes often stretch into the lush and green forest, the white snow shining through green trees. The bank of the lake is dotted with small villas of unique shapes, making a beautiful and comfortable holiday village.
In 1997, the Basumtso Lake was listed by the World Tourist Organization as one of the world's best tourist spots.

Tsodzong Monastery, referred as “Lake Castle” based on Tibetan language, is standing on the center island of Basumtso, covering an area of about 2000 square meters. As for its history, some hold that it can be dated back to 1500 years ago, was originally built in the Tubo Period. Others believe that in the mid-14th century, a famous Nyingma eminent monk presided over its construction. According to relevant records, there wasn’t obvious cultural development until the regime of Tibetan King Songtsen Gampo, and Buddhism was also introduced to Tibet at this period. It can be inferred that Tsodzong Monastery having a history of more than 1500 years is out of the question. 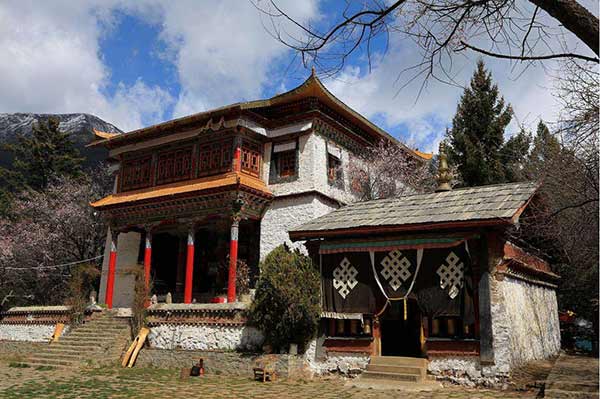 Actually, Tsodzong Monastery is noted for its hallmark treasure of this temple-a cloth carried the seal of Tibetan King Songtsen Gampo, which written extremely important underground Buddhist Scriptures that was passed to Master Guroo by King Trisong Detsen after preserved for dynasties. It is 30cm in length and 25.4 cm in width, three seals in total with three paragraphs of Tibetan language. This hallmark treasure here at least has provided us two pieces of pivotal information: the first is that the history of Tsozong Monastery may be earlier than the fourteenth century, and the second is that the temple must have something to do with underground Tibetan culture.