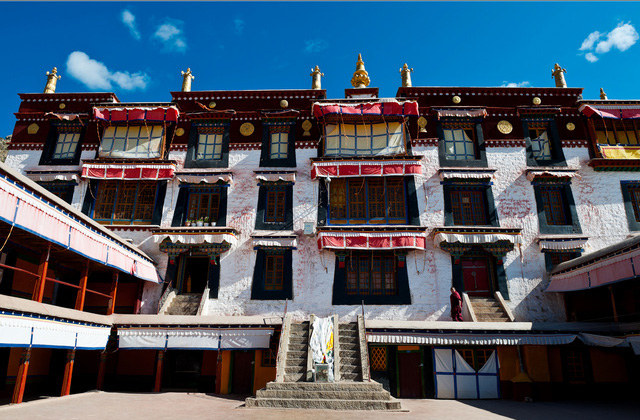 Located 5km from Lhasa, the Drepung Monastery is the largest of all Tibetan monasteries, and indeed at its peak was the largest monastery of any religion in the world. It was founded in 1416 by Jamyang Chojey, a direct disciple of Je Tsongkhapa, the founder of the Gelukpa School.

Drepung Monastery was known for the high standards of its academic study, and was called the Nalanda of Tibet, a reference to the great Buddhist monastic university of India. Chapman reported that in the late 1930's Drepung was divided into four colleges, each housing monks from a different locality.

In 1409 AD, Master Tsongkhapa successfully held the Monlam in the Jokhang Temple in Lhasa. Just in the same year, he advocated to construct the ancestral temple of the Gelug Sect which is Ganden Monastery, formally symbolized the formation of the Gelug Sect that Tsongkhapa painstakingly created and lay belief among all the Tibetan monks. With the increasingly powerful forces of the Gelug Sect, the number of the believers is steadily on the increase, that’s just the background of the Drepung Monastery’s construction. In the year of 1416 AD, under the presiding of one of Tsongkhapa’s disciples, the Drepung Monastery started to be built, with the 7 disciples of Tsongkhapa’s disciple respectively presiding over the 7 Raseng in the monastery. When it came to the year of 1464, temples are established in the Drepung Monastery to preach. Monks in the monastery mostly are friendly so that if you can invite them to accompany with you visiting the temples, there will be a lot of harvest.

The Drepung Monastery covers a large scale with an area of about 250 thousand square meters. Initially, there are 7 Raseng which later merged to 4 and numerous famous monks in Tibet used to study here, reaching to nearly ten thousand monks at its peak time. Drepung Monastery bears a dense building structure, with palaces connected with each other and buildings stacked. Basically, each building is divided into three horizontal levels, i.e. scripture hall, Buddha hall and living hall, formed the pattern of rising layer by layer from the door to the Buddha hall and highlighted the distinguished status of the Buddha hall. Among which, the large-scale, magnificent and solemn Coqen Hall is in picturesque disorder, eclectic Deyang Raseng is rough and plain and the Amaba Raseng of tight layout is towering and stern. Outside of the buildings are decorated with some Buddhist themes such as gilded roof as well as prayer wheels to enhance the solemn atmosphere of Buddhism and enable the whole construction seems more spectacular. In a word, the Drepung Monastery is mainly composed of several parts including the Coqen Hall and four great Raseng as well as Ganden Podrang.

Ascend the stairs along the west side of Drepung Monastery, and step in a door, a road appears on the left side. There’s a stream along the road and Tibetan women frequently wash the bells by the stream. After walking up to a platform in the mountain, you are able to overlook the scenery of the valley. Continue to walking up, you will see some Buddha images painted on the rocks on your left from a distance, and the iron shelf in the back is exactly the Displaying Buddha Platform of the Sholton Festival. Each year during the Sholton Festival, the Drepung Monastery will hold the displaying Buddha ceremony and exhibit the Giant Buddha Thangka on the slope which attracted large quantities of believers and tourists to pray for blessing here. The famous Ganden Podrang situated at a very high level of place on the right hand with three layers and each window planted a variety of flowers. Furthermore, the Drepung Monastery has the largest scale among all the other monasteries in Lhasa or even in the whole Tibet. Besides, the number of precious collections stored in the Drepung Monastery is also quite amazing, including porcelains of past dynasties, various Thangka, copper statue and ancient weapons and armors.

It can be a somewhat useful analogy to think of Drepung as a university along the lines of Oxford or the Sorbonne in the Middle Ages, the various colleges having different emphases, teaching lineages, or traditional geographical affiliations. Today the population at the monastery located in Tibet is much smaller with merely a few hundred monks. However, the institution has continued its tradition.

What's more, the Drepung Monastery houses many cultural relics, which adorn the monastery and make it more superb. Statues of Manjushri Bodhisattva, and Sitatapatra found on the first story of the Coqen Hall, rare sutras on the second story and Jamyang Qoigy's conch shell given by Tsongkhapa on the third one, all add to the wonder of the monastery. Exquisite statues of Tsongkhapa, Kwan-yin Bodhisttva, Manjushri Bodhisattva, Amitayus, and Jamyang Qoigyi in other sutra halls, as well as flowery murals on walls also fully present the wisdom of the Tibetan people.

Apart from precious cultural relics, there always hold a lot of auspicious ceremonies in the Drepung Monastery. Whenever there are some large Buddhism commemoration’s days or lucky days in Tibetan calendar, Tibetans will stage corresponding religious ceremonies to celebrate in the monastery, together with some other celebration activities both for monks and laymen, among which the Drepung Shoton Festival can be the largest one. On June 30th of Tibetan calendar comes the Shoton Festival when people first center the Drepung Monastery and display huge Thangka of Buddha image in the morning. Then the Tibetan operas will be showed, entertained monks and common people in Tibet.