Drigung Til Monastery is located in Moinba Country of Maizhokunggar County, Lhasa City, Tibet Autonomous Region, once owned a very brilliant position both in the local political history and religious history. It was a golden node that connected Northern Tibetan Grassland and Lhasa Plain. On the other hand, it is also the most important Tibetan Buddhism monastery of Drigung Til Kagyu Sect. The Drigung Til Mandala is situated on a mountain at the back of Drigung Til Monastery. It is said that the dead taken abhiseca by the living Buddha of Drigung Til Monastery would have their souls be freed to the paradise rather than gone down to the hell. That’s the reason why so many people make light of traveling from afar to send the dead here to carry out celestial burial. 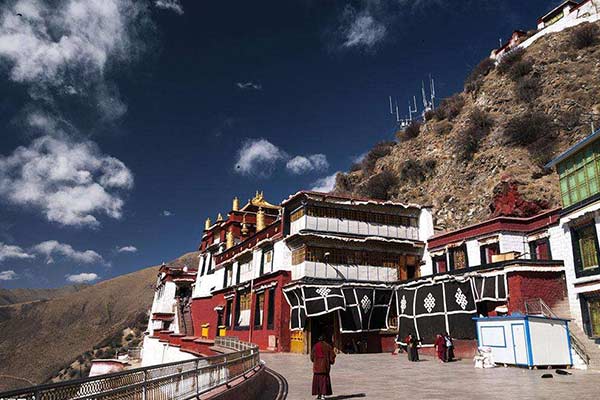 As a matter of fact, Kagyu sect was a large branch of Tibetan Buddhism. However, due to its disagreement with Sakya Monastery during the Sakya Dynasty, the two parts finally met on the battleground at a war which has lasted for a long time. It was said that in addition to the monk soldiers attacking each other, the masters of both sides also practiced spells at their own temples to put damage to enemies. Later in the year of 1290, monks of Sakya Monastery flooded into Drigung Til Monastery to fight a decisive battle. In the end, Drigung Til Monastery was almost completely burned down in that final war. With the passage of time, Drigung Til Monastery has been gradually restored and the number of monks in the monastery ascent to more than 300 at present. 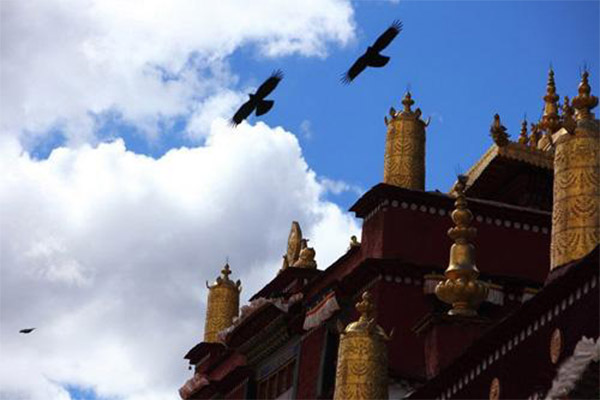 Inside of the monastery collected Buddha’s relics of ancient successive Kagyu founders and also tombs of Indian 8 major Vidyahara. From south to north in the main hall are the Stupa Hall, Great Buddha Hall, Meditation Chamber and Dharma Hall etc. in turns. Every hall is equipped with a spacious platform, beautified the view of Drigung Til Monastery. Furthermore, there are statues that were almost works of Yuan and Qing Dynasties standing in each hall. The wing-rooms in the west and in the east are distributed symmetrically. All in all, the entire construction of this monastery seemed magnificent and solemn with a neat layout. For tourists coming here, the main attractions of the temple include the scripture hall, stupa hall, depositary of Buddhist sutra, Dharma hall, Tantric meditation room and Mandala etc. However, local government has issued the notice to ban tourists to visit the celestial burial since August 2013 for certain reasons.

What is more enlightened than cremation must go to the Tibetan celestial burial which indicated that humans are born naked and hence should pass away naked, never occupy a star of land. How natural and unstrained the burial is! It actually shows a complete harmony between man and nature. In this modern world of today, the implicated mystery and allure of Tibetan burial custom-the celestial burial (or more known as sky burial), are far more than the Qinghai-Tibet Plateau itself where Tibetan people live and where the custom experienced. What this unique celestial burial bring to people of the outsiders are tons of associations, puzzles as well as conjectures and accompanied a smattering of superficial introduction to the custom-only a deduction of their subjective conjectures. What is true face of Tibetan celestial burial and where did it originate from? Come to Drigung Til Monastery and you will have a better understand of this special custom among Tibetan people.

On 25th of the fourth month according to Tibetan calendar, the annual Summer Buddhism Ceremony of Drigung Til Monastery will be held there. What can we humans do in facing with death, aging and disease is an ultimate problem of human. In the heart of Tibetans, they regard their Buddha have gave them a satisfied answer. For thousands of years, countless Buddhist preaching and sectarian heritage has been spreading this truth to more and more believers. Most of Tibetan people are educated to face with death started from a very young age and so accepting death and unknown things is a common sense of Tibetan kids. That’s the answer Buddha gave them to deal with life.

The restaurant and lodging facilities are very basic at Drigung Til Monastery. There are some better guesthouses near Tidrum Hot Spring, which is only 13km (30 minutes drive) distance away.