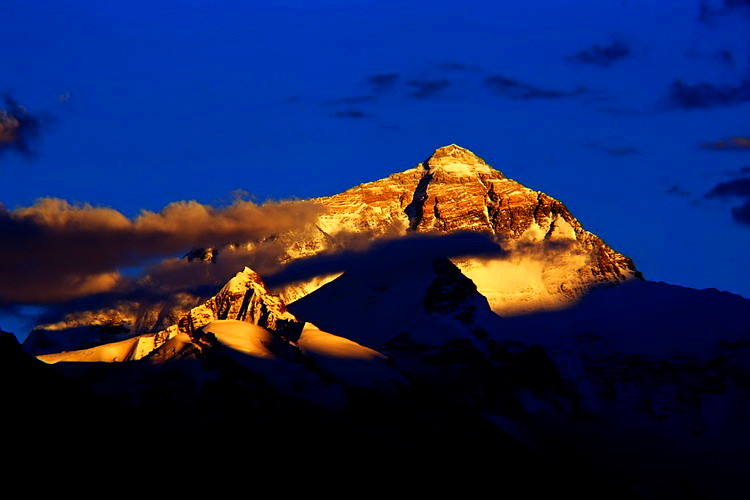 Mt. Everest is part of the Himalaya mountain range along the border of Nepal and Tibet. It is located 27° 59' North latitude, 86° 55' East longitude.Everest (also known in Nepal as Sagarmatha and in Tibet as Qomolangma) is the Earth's highest mountain."Mt. Qomolungma" which literally means "The Third Goddess". It is interesting to know that the Tibetans did't name this peak Mount Everest, it is named by the British after George Everest.

The current official height of 8,848 m (29,029 ft) as recognized by Nepal and China was established by a 1955 Indian survey and subsequently confirmed by a Chinese survey in 1975.

Mount Everest attracts many highly experienced mountaineers as well as capable climbers willing to hire professional guides. There are two main climbing routes, one approaching the summit from the southeast in Nepal (known as the standard route) and the other from the north in Tibet. While not posing substantial technical climbing challenges on the standard route, Everest presents dangers such as altitude sickness, weather, wind as well as significant objective hazards from avalanches and the Khumbu Icefall.

While the overwhelming majority of climbers will use bottled oxygen in order to reach the top, some climbers have summitted Everest without supplemental oxygen.

At the summit, the temperature can be 100°F below zero. But on a good summit day, a climber can expect around -15°F

Besides Chinese Visa, you’ll need to get the Tibet Travel Permit, the Alien’s Travel Permit as well as the Border Permit to visit Everest Base Camp in Tibet. And for Mt. Everest Mountaineers, a mountaineering license from Tibet Mountaineer Association is needed. All the documents could not be applied individually, but through a travel agency registered in Tibet Tourism Bureau.
Best Time to Visit:

April to mid June, and early October are considered the best time to travel to Everest Base Camp. Reasons are simple-it’s neither cold nor rainy during these periods, so there are more chances to view the peak. As in summer season (July to September), you may meet foggy weather, while in winter season (November to next March), it would be very cold to visit.

There are two options for accommodation at Everest Base Camp-Rongbuk Monastery Guesthouse or tent guesthouse. Blankets, hot water, heating and even WiFi are available, but the other facilities are basic. Choices of food are also few-instant coffee, noddles, egg pancakes with higher prices than in Lhasa.