Wangbur Mountain is like a lying giant elephant, carrying a large scale of architectural complex scattered all over, which fully reflected the traditional Tibetan Buddhism monastic architecture in the light of local conditions, temples standing near the mountain and overlapping buildings, thus, the buildings always looked majestic and also spectacle. Ganden Monastery, located at Wangbur Mountain which lies on the southern bank of Lhasa River at an altitude of 3800 meters in Tagtse County, 47km (29 miles) from Lhasa City, is one of the earliest and largest Buddhist monasteries in Tibet. It domained the most special position among the six great monasteries of the Yellow Sect as it was established by Tsongkhapa, the founder of the Gelug Sect of the Tibetan Buddhism, in the year of 1409. For this reason, the Ganden Monastery has always been reputed as the ancestral temple of the Gelug Sect. 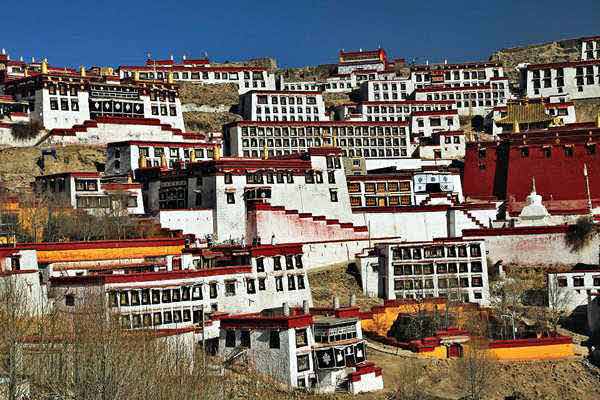 Although during a period of time, this monastery has been destroyed completely, almost all the buildings were subsequently reconstructed and cultural relics also lost at a large number, it is still worthy of appreciating if you are particularly interested in Tibetan Buddhism. Tsongkhapa then resided in the monastery and carry on dharmacakra there. Tsongkhapa-the founder of the Yellow Sect, implemented the religious reformation in the 15th century and constructed the first Gelugpa monastery which is the Ganden Monastery and it was in funded by several local government leaders. 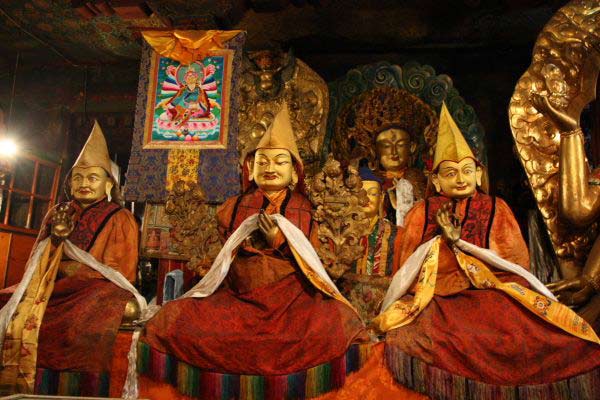 After the death of the Tsongkhapa, his disciple Jacage Tamarinchin and Glebessan inherited, called Tripa, hence, generated the Ganden Tripa inheritance system. The monastery is divided into two Raseng-Jiangzi Raseng and Xiazi Raseng, which later laid the foundation of the Gelug Sect. At the very beginning, people address them Ganden Monastery Sect, or Ganden Sect for short. The establishment of the Ganden Monastery marks that Tsongkhapa and his followers appear in the position as an independent of other sects of Tibetan Buddhism.

There are exquisite murals and sculptures together with abundant and precious historical relics including suits of armors studded with gold, silver and jewelry, written in Chinese, Mongolian, Manchu, and Tibetan that the Emperor Qianlong gave to Ganden Monastery in the year of 1757, as well as many elaborated silk-waved Thangka, among most of them are Jiangsu embroideries that were taken from the inland by a disciple of the Tsongkhapa in the early Ming Dynasty. Besides, there are also the seat for enthronement and the bed for meditation when passing away of Tsongkhapa together with 24 Thangka that were given by Emperor Yongle of the Ming Dynasty, and the cushion of Gushri Khan. All the rare cultural relics have been enough to display the long history and exalted religious status of Ganden Monastery. Each year on the October 25th is the Memorial Day of Tsongkhapa when a huge image of Buddha (26 meters in length and 10 meters in width) is displayed during the daytime and lamps are lighted up all over the temple to show respect to Tsongkhapa during at night, known as the Death of Tsongkhapa of Tibetan even grander than the Shoton Festival. 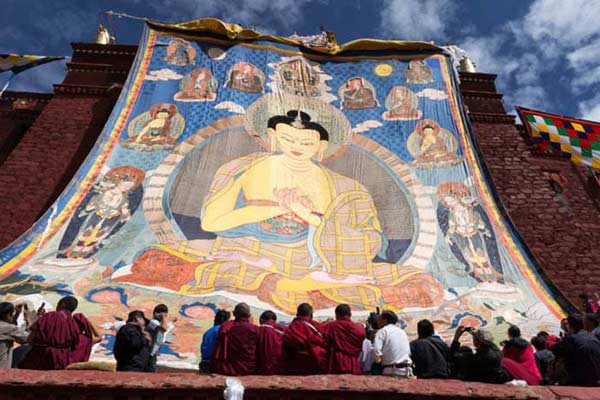 However, during a certain period of time, Ganden Monastery was so severely damaged that the ancient buildings have been all demolished, left only debris. A great quantity of the cultural relics in the temple also be almost ransacked and even the stupa of Tsongkhapa was smashed up. It is said that the world’s third largest diamond disappeared, remained only a small part of the precious cultural relics. Therefore, many people of other regions hate the people in the vicinity of the Ganden Monastery, saying they have demolished the temple and they’ll never get rich. It wasn’t until the 21 century that the Ganden Monastery was reconstructed step by step but the scale cannot be compared with the original ones.

Summer is always the high season of both sightseeing and photography. During the Shoton Festival, there are also Buddha display ceremonies in the Ganden Monastery. Although the Buddha is not as huge as that of the Drepung Monastery, it is still uncommonly exquisite and attracting that you will definitely have fun here.

Additionally, there is a classical trek route from Ganden Monastery to Samye Monastery, offering stunning scenery of sacred lakes, alpine terrains as well as herders’ camps en route. And the best time for the the trek is from May to October.