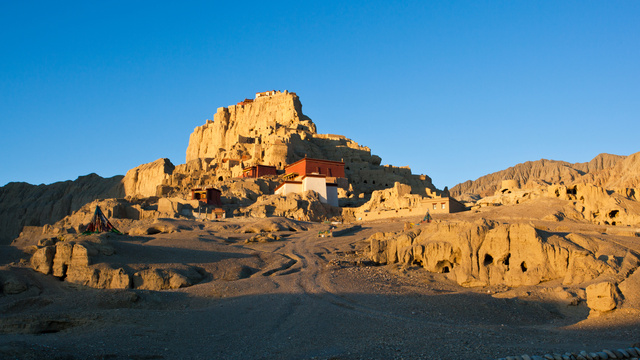 The ruins of the Guge Kingdom on the outskirts of Zhada County, Nagri region, in southwest China's Tibet autonomous region date back some 1,000 years.It was stablished in about the 10th century.

It was founded by one branch of descendants of a nearby crumbled Kingdom. It was ruled by about 16 kings with armies of tens of thousands of soldiers during the over 700 years in which it flourished.The Guge Kingdom used to be the region's center of cultural and economical development. Known as the "Old Summer Place of Tibet."
During its lifetime the Guge Kingdom played an important part in the economic and cultural development of Tibet. It advocated Buddhism, and many versions of this religion were created here and their teachings were spread from here into the heart of Tibet. It also served as a major center for Tibet's foreign trade.
It is also the cradle of many ancient crafts, including carpentry, wall painting, ceramics and textile technology. To prevent the historical relics from falling into disrepair, local have set up a management station to patrol and maintain the premises.
While these ruins were once an imperial estate which fell into disrepair after the civil revolt and the invasion of the allied armies of eight foreign countries, the Guge kingdom also encountered civil strife and foreign attacks which fragmented the once prosperous state.
Exactly how this kingdom of 100,000 inhabitants disappeared from view 350 years ago is still a matter of debate.
However, the legendary kingdom hasn't been totally lost as much can be learned about it from its remains.