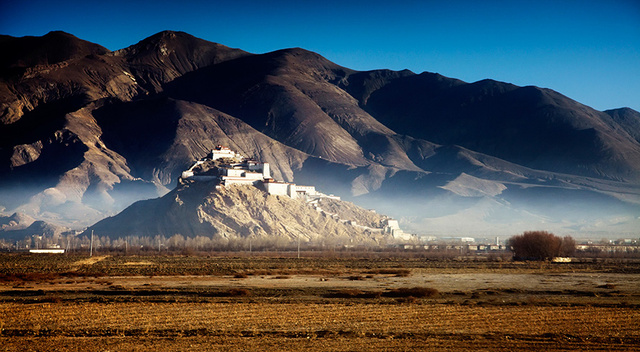 Gyantse Dzong or Gyantse Fortress is one of the best preserved dzongs in Tibet, perched high above the town of Gyantse on a huge spur of grey brown rock. The Gyantse's town fort sitting upon a hill just north of Gyantse town on China-Nepal Highway.

“Dzong” is an administrative unit of Tibet in the past, which is equivalent to County. Hence, the Dzong is in fact a county government of Tibet. Gyantse Dzong buildings were originally built around the beginning of the 14th century, comprising of mainly the office of the county magistrate, the scripture hall, Buddha’s hall and a variety of warehouses that were all constructed from the hillside to the peak by the shape of the fort. The building looks tall, magnificent, and commanding with an imposing manner. Later on, in order to resist the invaders, soldiers and villagers guarding the mountain constructed walls around at a height of 5 to 8 meters and about 4 meters in width by using aligned large stones and also built many fort barbettes along the wall and cliff in front, giving a heavy blow to the British army. But in the ongoing war, the Gyantse Dzong was almost destroyed by the invaders as a ruin. Till now, the remaining remnant has been maintained and protected under the Tibetan local government.

Gyantse Dzong has always been the authority of this plain that only the master of the Chu River Valley has the qualification to settle in. However, what really makes the Dzong be known around world is in the year of 1904 when British who were armed to the teeth invaded Tibet and has been hit to Gyantse County where the British encountered an unprecedented stubborn resistance here. Only be ill-equipped to fight, Tibetans relied on the natural barrier of Gyantse Dzong to fully withstand the attack of the British more than three months. After the last bullet, Tibetan warriors collectively jumped to the cliff would rather die than surrender. Stationed on where the martyrs sacrificed, the vertiginous cliffs are just on the foot of the mountain, and the glorious land from far away.

The fort is partly ruined, but there are still some things to see. There is an interesting Anti-British Imperialists Museum here displaying a version of the facts of the 1904 British invasion of Tibet and a major battle that took place.