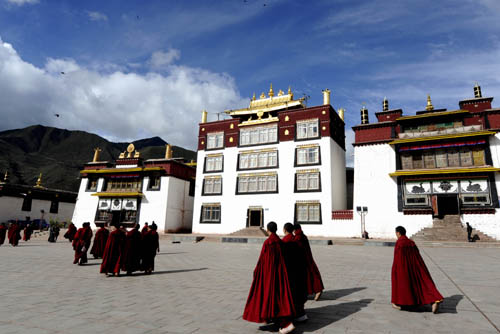 Built in 1444 by one of the Tsong Khapa's disciples, Jampaling Monastery (Chambaling Monastery) is located on a high mesa where Ongqu and Zhaqu Rivers meet and merge into the famous Lancang River in Chamdo Town. The monastery houses the Gelugpa Sect which belongs to Tibetan Buddhism.

Constructed as the first monastery of the Gelugpa Sect in Kham area, Jampaling Monastery has a history of about 540 years. It has the Main Assembly Hall, the Guardian Hall, the Tara Hall, the Sutra Debating Hall and 12 Zhacangs (sutra studying schools).
From the reign of the 14th abbot, the monastery adopted the Reincarnation System of living Buddha. In history, there were five main living Buddhas. Since the reign of Emperor Kangxi of the Qing Dynasty (1644-1911), those living Buddhas have been all conferred by the central government. Today, in the monastery are still preserved a bronze seal, a plaque inscribed with 'Gandan Jampaling Monastery' granted by Emperor Kangxi and another plaque bestowed by Qianlong, also an emperor of the Qing Dynasty. In its Golden Age, the monastery housed about 5,000 monks and administered 70 small monasteries.
The most celebrated feature in the monastery is the Holy Dance, only performed during the Butter Lamp Festival that celebrates the victory of Sakyamuni against the heretics in a religious debate. The festival falls on January 15th of Tibetan calendar. During the festival, the monks wear ferocious masks and perform this religious dance to exorcise the ghosts and to pray for a good harvest next year.
Hundreds of Buddhist figures and sculptures of hierarchs, wonderful murals and Thangkas in the monastery are also worth visiting. All of them show the exquisite craftsmanship of the artisans in Chamdo.