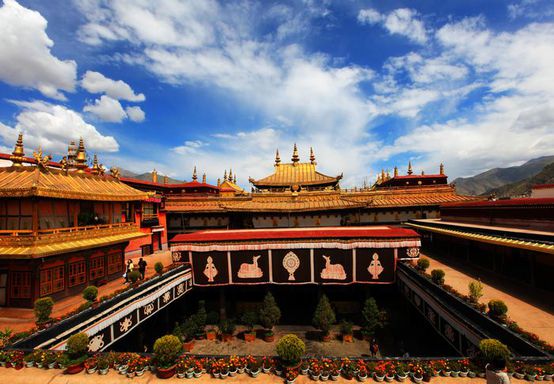 Included on UNESCO's World Heritage list in 2000 as part of the Potala Palace , the Jokhang Temple is located in central Lhasa. With an area of 25,100 square meters (about six acres), it is the ultimate pilgrimage destination for Tibetan Pilgrims.

The Jokhang Temple was built on the former site of a lake. According to the legend, the lake site was chosen after many failed attempts to build a temple in the region. Prior to this, every time a monastery was built, it would collapse. Confused by this phenomenon, Princess Bhrikuti turned to Princess Wencheng for help. Being a learned woman, Wen Cheng told the Princess that the geography of Tibet was very much like a hag, with the lake at the heart. In order to build the monastery, Princess Wencheng advised they must demolish the hag by filling and leveling the lake using 1,000 goats to carry soil from a mountain far away. When the construction work was done, it was called Ra-Sa-Vphrul-Snang ('ra' meaning goat and 'sa' meaning earth in Tibetan) to commemorate those goats.

Jokhang Temple is located at the center of the old town of Lhasa, dating back to 1350 years ago. It is originally named the “Tsuklakang” or “Tsulag Khang” during the Bon period of Tibet which means “House of Religious Science” or “House of Wisdom”. But now, it is more commonly known as the Jokhang, meaning the “House of the Buddha”. Jokhang temple is a major reason why Lhasa enjoys the reputation of “the Holy Land” among so many cities and regions in Tibet. It looks uncommonly delicate with a strong Tibetan Buddhism atmosphere here together with countless believers worshipping various Buddhas. It is indeed the most resplendent and magnificent temple in Tibet which has sanctified this land and also itself.

The oldest part of the Jokhang Temple originated in the seventh century AD. It was one of two temples built primitively by Tibetan King Songtsen Gampo for his two wives: Princess Wencheng from China and Princess Bhrikuti from Nepal, to house the statues of Buddha taken to Tibet by his two foreign wives. Legend has it that the site of Jokhang Temple was initially a lake, and Songtsen Gampo promised to his wife to build a temple wherever his ring landed after he threw it into the air. Then, the ring exactly fell into a lake and the surface of the lake sparking, rising a nine-storey white stupa as if by magic. Consequently, a mighty work of constructing the temple with the help of thousands of white goats carrying soil started and lasted for three years to complete. In order to commemorate the goat, named this Temple “ReSa”, for in Tibetan language, “Re” means goat, and “Sa” means soil. Later on, it became the name of the city and then evolved into “Lhasa” which is familiar to us all. According to folklore, the name of Jokhang Temple has something to do with Tibetan Great Prayer Festival which began in the fifteenth century.

Jokhang Temple is the most glorious construction extant left from Tubo Period of Tibet. It's a four-storey timber complex with a golden top, adopting the architectural styles of the Tang Dynasty, as well as those of Tibet and Nepal. In addition, it is the earliest civil structure architecture, after many times of rebuilding and enlargement, formed the grand scale of over 25100 square meters nowadays, with more than 20 halls in it. The major hall of the Temple is of four-storey height, covered with gilded bronze tiles on the roof, which looks dramatically spectacular. Jokhang Temple is not only a delicate hall housing many Buddha statues and shrines for believers to worship, but also an ideal model of the universe based on Buddhism. Apart from possessing an architectural style of the Tang Dynasty, the Jokhang Temple also assimilated some of the architectural art characteristics from Nepal and also India, becoming a model of Tibetan religious architecture.

In the middle of the hall, enshrined and worshipped a gilded bronze statue of Sakyamuni equivalent to the same size when he was 12 years old. On both side-halls consecrated various statues such as the statue of Songtsen Gampo, Princess Wencheng and Princess Bhrikuti, etc. It is said that the Jokhang Temple originally enshrined the statue of Sakyamuni equivalent to the same size when he was 8 years old, which was taken from Katmandu by Princess Bhrikuti. But now, the statue taken by Nepal princess is inside of the Ramoche Temple. Overlooking the Jokhang Temple Square from the gilded roof of the Temple, stands the Potala Palace on the right mountains in the distance, the willow around is called the “Princess Willow” because rumors saying that it was planted by Princess Wencheng. Jokhang Temple is mainly consisted of Hall of Sakyamuni, Hall of Master Tsongkhapa, Hall of Songtsen Gampo, Bandanlamu Hall, and Tibetan King Hall, etc. Inside of the Jokhang Temple, a variety of wood carvings and murals looked exquisite beyond compare and the smell of yak butter permeated the air, Tibetans worshipping with a devout look can be seen everywhere.