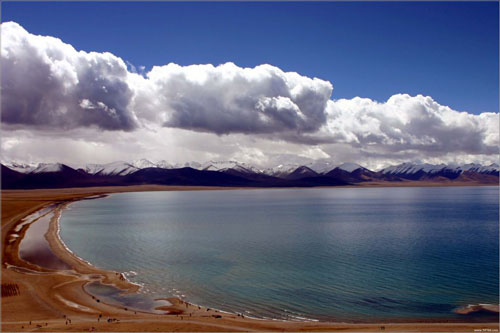 Lake Manasarovar lies about 20 km southeast of Mt. Kailash. It means 'Invincible Jade Lake' in Tibetan. The word "Manasarovara" originates from Sanskrit language, which is a combination of the words "Manas" "sarovara" manas meaning mind and sarovara meaning lake.

According to the Hindu religion, the lake was first created in the mind of the Lord Brahma after which it manifested on Earth.

Lake Manasarovar is a freshwater lake in the Tibet Autonomous Region, 940 kilometres from Lhasa. To the west of it is Lake Rakshastal; to the north is Mount Kailash.It is connected to nearby Lake Rakshastal by the natural Ganga Chhu channel.

Its depth reaches a maximum depth of 90 m and Lake Manasarovar is relatively round in shape with the circumference of 88 kilometres. The altitude of the lake is about 4,588 meters (15,052.49 ft.), making it one of the highest fresh water lakes in the world. The water is very limpid and bright.

Lake Manasarovar is near the source of the Sutlej River which is the easternmost large tributary of the Indus. Nearby are the sources of the Brahmaputra River, the Indus River, and the Karnali River (Ghaghara), an important tributary of the Ganges River.

The Hindu legend has that it is the amrita designed by the great god Brahma that can wash away all one's sins as well as any anxiety or improper thoughts. Many pilgrims bathe in the lake and take some water back as a gift to their relatives and friends. The surrounding area is the point of origin for India's two most famous rivers, the Indus and the Ganges.

Like Mount Kailash, Lake Manas Sarovar is a place of pilgrimage, attracting religious people from India, Nepal, Tibet and the neighboring countries.