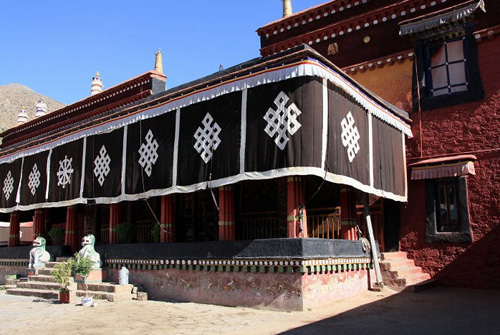 Nechung Monastery, visible on the right as you approach Drepung, was the home of the State Oracle of Tibet and abode of protector deity Pehar. The Dalai Lama would not make important decision without first consulting with the State Oracle at Nechung.
You enter the monastery through the blood-red doors, with their startling paintings of flayed human skins, and come to a hall. The chapel of Dorje Drakden (an aspect of Pehar) is on the left. It contains the remains of a tree trunk where the deity is believed to have taken residence, two thangkas depicting him in peaceful and wrathful aspects, and statue of Padmasambhava. The other groundfloor chapel contains a statue of Sakyamuni and some fine thangkas. A side door to the right of the main entrance leads up to the first floor, with the Dalai Lama’s audience room on the left and a room dedicated to Tsong Khapa on the right, and then up to a chapel at the top of the building containing a fine new statue of Padmasambhava.
The group of buildings to the east is a monastic school of Buddhist logic attended by more than 130 young monks of many sects from all over Tibet.
Nechung is well worth a visit for its historical role as the seat of the Tibetan State Oracle, and it is easily reached on the way down from Drepung. Soft drinks and jars of yoghurt can be bought from a stall by the entrance.