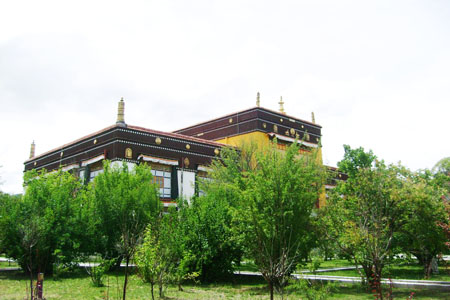 The New Palace of Panchen lies to south of the Tashilhupo Monastery. It is famous as the summer palace of the tenth Panchen Lama (1938-1989).It greatly mixes both traditional and modern architectural styles.  the palace covered with green plants making it a natural and peaceful environment for Panchens.

There are three gates of the New Palace of Panchen. When pass the gates, visitors can view the palace interior, including the Panchen Lama bedrooms, drawing rooms, sutra hall, Buddha hall and Buddhist Guardian Hall. The palace houses a number of precious cultural relics including spectacular frescos. The most famous fresco is "Phakpa Meeting Kublai Khan", depicting Lama Chogyal Phakpa (1235-1280 AD) joining the court of Kublai Khan (1215-1294 AD) as imperial spiritual teacher.