The Norbulingka, meaning Jewel Park, lies three kilometers (two miles) west of the Potala, near the Holiday Inn. Palaces, pavilions, a zoo, gardens and woods cover 40 hectares (100 acres). It has the finest trees in Lhasa and its light-hearted air makes it less demanding than most sights in the city. The Seventh Dalai Lama put up his first summer palace in 1755, and each successive ruler added his own buildings. The current Dalai Lama built a new palace in the 1950s shortly before he left Tibet. Although considerably damaged, the Norbulingka has been restored.

One of Lhasa’s greatest annual pageants used to be the Dalai Lama’s springtime move from his winter to his summer palace. In a magnificent procession of lamas, nobles in the costumes of their rank, soldiers, musicians on horseback, and banners, the god-king was borne along in a gilded, curtained palanquin while monks carried his belongs wrapped up in yellow silk. The dal lama, his family and high dignitaries entered the inner walled gardens containing the palaces, while teachers, servants and bodyguards occupied the surrounding buildings, During the summer, nobles were invited to watch operas and other open-air performances.

The elaborate gate of entry, guarded by comical white lions and huge red doors, was built by the Thirteenth Dalai Lama in this century. A road to the right leads past ragged lawns to the New Summer Palace, which stands inside a spacious walled garden. Its traditional Tibetan architecture is modified by large windows and a double-storey entrance with painted eaves in Ming-Dynasty style. Visitors can enter, after removing their shoes, and are conducted in groups by a palace guide. The rooms on view upstairs include a main throne hall above the entrance, the Dalai Lama’s private apartment, an audience hall and his mother’s apartment.

The style throughout is a bizarre mixture of religious-traditional and modern. The main throne hall is bright and airy with a statue of young Sakyamuni occupying the higher of the two thrones. Opposite, a superb mural tells Tibet’s mythical early history from its founding by the holy monkey through to Songtsen Gampo’s building of the Jokhang. The adjacent wall recounts the founding of Samye Monastery. 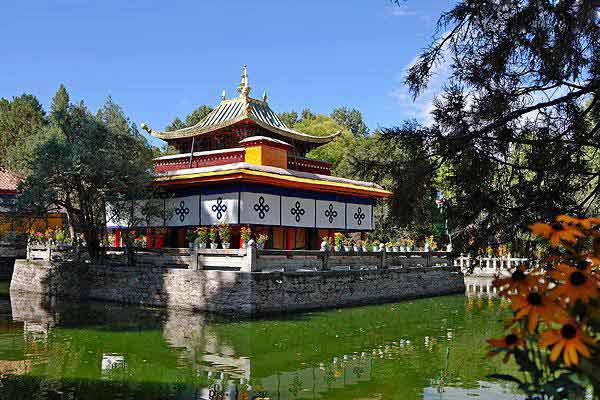 The palace remains exactly as the Dalai Lama left in 1959. His own apartment juxtaposes carved Tibetan cabinets with heavy, Art-Nouveau armchairs hauled over the Himalayas. Sacred images look down on an antique Russian radio and a Philips console still containing his old 78 rpm records. One amusing detail in the Audience Hall is often overlooked: on the left-hand wall when facing the throne, near the back corner. Is a mural like a photo-montage showing the Dalai Lama’s family and an international delegation of diplomats mingled among gods and demons.

The artificial lake, usually dry, and the Thirteenth Dalai Lama’s little temple are in a walled compound adjoining the garden of the New Summer Palace. Two pavilions with charming, carefree murals stand on a small island. On the east side, through another wall, an inner, unkempt garden backs up to the Old Summer Palace, it contains small buildings formerly used for studying, meeting and living, still unrepaired. The 18th-century Old Summer Palace is reached from the road outside. Its dark, low-ceilinged, elaborate rooms have been restored.

To the west is a small, fairly well-kept zoo with a collection of Tibetan animals such as snow lynx, white-bibbed Himalayan bears, fanged deer (lageh) and red, ring-tailed lesser pandas.

Not to be missed is the furthest temple group, called the Kasang. The main temple contains one of the finest collections of thangkas anywhere. Bring a flashlight. Some 70 hanging thangkas depict mandalas, scenes from Buddha’s life, a herbal pharmacopoeia, a bestiary, and more-a magnificent array. One wall displays the dalai lama’s throne and 48 jewelled, brocaded bodhisattvas and Taras n glass cases. Just west of the main temple, the small Deki Hall with steep steps has delightful murals. Open 9am-5pm.