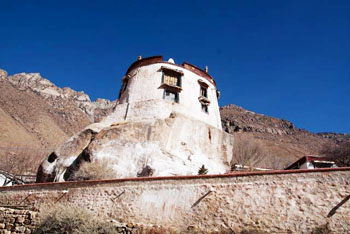 Bearing the meaning of “palace that lies on rocks”, Pabonka Monastery is located on northern suburbs of Lhasa City, where the sku-mkhar-ma-ru built by King Songtsen Gampo is situated. According to Tibetan folk, Songtsen Gampo used to practice Buddhism in the grotto under the massive rocks. On the walls and the roofs of the cave engraved with the images of a variety of Buddha and inside of the cave placed the seat stand of Zanpu. Before the constructing the Jokhang Temple and Ramoche Temple, Songtsen Gampo had built the sku-mkhar-ma-ru palace which is of 9 floors height on top of a bedrock, but now we actually can see only 3 layers of it.
The palace was built with masonry and poured seam with copper, 4 iron chains were used to fix all around. After the completion of the palace, King Sontsen Gampo usually discuss official business and receive guests here, making the palace a significant place for political and religious activities.
Based on the Tibetan historical records, after Thon-mi-sambhota created the Tibetan language, he came to the palace to offer Songtsen Gampo his achievement and the “six word mantra” written in Tibetan language for the first time was carved on the wall of Risong Lacan at the front of the temple, being clearly visible till today and also 21 Buddhism Classics were translated out on the basis of the new created Tibetan language. Subsequently, Songtsen Gampo lived in seclusion for 4 years to learn Tibetan language. Later on, during the period of Trisong Detsen, the sad-mi-bdun had lived here and the palace became an important place for Buddhist activities. At the end of the Tubo Dynasty, Pabonka was severely damaged.
However, monk Gexizhagawa of Kadampa presided over a reconstruction including the construction of 2 more layers’ hall on the ruins and the establishment of monks’ organization at the end of 11th century.
In addition, Tsongkhapa has practiced in a cave in the vicinity of the palace, namely the cave of Mahayana with nearly 2 meters in height and 10 square meters in acreage.
After that, the disciples of Tsongkhapa built Zhuotuo Lacan, Cameroon Lacan and 108 pagodas in the west of the cave of Mahayana.
The Pabonka, under the jurisdiction of Sera Monastery, was repaired and expanded again during the ruling of the fifth Dalai. Since then, when successive Dalai got ordained for the first time and achieved Geshe degree, would come to the palace to hold a celebration ceremony, became an admired historic site and a sacred place for Buddhists to worship. Unfortunately, the palace was destroyed in 1960s but reconstructed later.
The road to Pabonka is about three kilometers away and during the way to the Palace, a complete picture of Lhasa City can be seen half way down the hill. There are fertile plants all over this mountain and you can see cattle and sheep grazing grass everywhere on this hill.
Pabonka is a forgotten temple by tourists but it seems like a land of idyllic beauty compared with Sera Monastery, Drepung Monastery and Jokhang Temple that are always full of travelers.
Furthermore, pilgrims and tourists are able to enter Pabonka to visit freely without any charge. Once got into Pabonka, you can see there’s a piece of cultural relic protected by steel wires on one of the hall’s wall. If you get closer, you’ll find it is an eye about half a foot long, seemed true to life which made people respect it from deep heart.
It is said that the eye belongs to Bichuwangchuchinbu, the one who has three eyes in total, with the other two eyes distributed on higher mountains. The distribution of the three eyes made the whole mountain looks like the face of Bichuwangchuchinbu, kept opening his eyes for years as if he was staring at every tourist and pilgrim coming to Pabonka.
Pabonka is only one of numerous temples in Tibet that was forgotten, but its holy aura will definitely give you a different feeling about Tibetan culture, so that you cannot miss out this sacred temple once you traveling to Tibet.