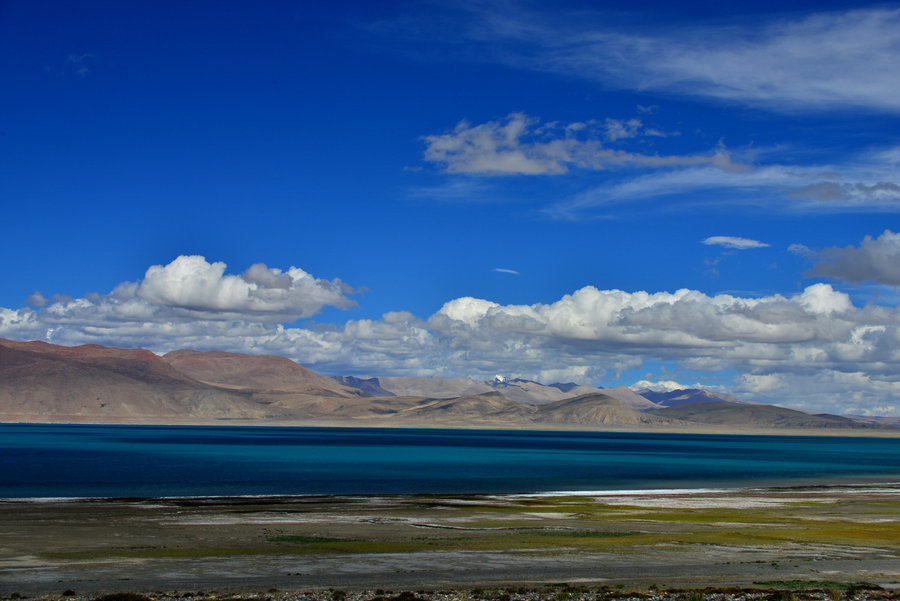 Located at an elevation of about 4590 meters at the junction of Geelong County and Nyalam County of Shigatse Prefecture, about 250 kilometers far from Tingri County, Peiku-tso is the largest lake in Shigatse with an area of about more than 300 square kilometers. This lake is surrounded by mountains on three sides with open terrain and abundant fish resource. There are a variety of rare birds and beasts that are peculiar to the Tibetan Plateau such as Tibetan wild donkey, black-necked crane, bar-headed goose and red billed gull etc. Especially in late autumn, waterfowls on the shore habitat or enjoy swimming here, set off the graceful bearing of the lake. Quiet water together with moving birds rather murdered the eyes and senses of visitors. The wind by Peiku-tso Lake also combed the beauty of it and is pregnant with the romantic charm of it. The red vegetation on the shore and blue sacred water in the lake as well as the snow-covered hills in the distance formed the unique landscape of Peiku-tso. Boil water by the lake and brew a cup of coffee, to taste slowly, lying on the pebbles of the shore and admiring the beauty in front of your eyes will definitely make you enchanted here.

Moreover, Mount Shishapangma on the lakeside of Peiku-tso is situated at 60 kilometers to the south of the lake. The inverted reflection of Shishapangma in water together with the rote of the Yarlung Zangbo River has become the eternal theme of Peiku-tso, making this gourd-shape place more enchanting and fascinating. It is said that people who is able to shoot to the Shishapangma will all hand in good luck. Although it’s perhaps just a legend, blessings from snow-capped mountains and holy lakes also give enough impulse and reason to halt at Peiku-tso Lake. If there is a desire in your heart to view the Shishapangma Peak, you can get to Saga County and then arrive at Gagey Ferry to ferry you across. The ferry operates from 10 am to 6:30 pm in winter and from 9:30 am to 7:00 pm during summer. On the way will you pass through the Peiku-tso nature reserve and the peak will be seen clearly once you are out of Saga County.

Compared with Namtso Lake, Lake Manasarovar, Siling Lake and Yamdrok Lake as well as so many other holy lakes in Tibet, Peiku-tso Lake is really not a celebrity so that local villagers call it “Hip Lake” jokingly. However, the gourd-like mountains and lakes which represented auspicious blessings got more and more suitors because Shishapangma Peak and the Yarlung Zangpo River served as a foil to its beauty. The water supply of Peiku-tso Lake is from Peak Shishapangma and Peikukangri Hill. The six-terrace that is relatively intact can be visible on the terrace development of Peiku-tso shore with the highest level of about 70 meters away from the lake. This open and flat terrain is mainly formed due to the shrink and dryness of Peiku-tso Lake. There is magical saying in the locality that Peiku-tso is actually divided into two parts: a freshwater in the south of the lake and a salt lake in the north. Separated from the middle of the lake, in the south side of the Peiku-tso lived a lot of fish while on the other side there’s no any fish, even if the fish in the south swam to the north will be dead. Hence, some dead fish is occasionally visible on the surface. There are a lot of fish in the south lake and most of them are cold water fish, but Tibetans don’t eat fish. Another custom here is that every year on January 25th, this lake will be blocked and ice over and the closure will be canceled on March 25th of each year. What’s magical and surprising is that the lake can freeze up within one day and also unfreeze in a day. Tibetan legend has it that this lake didn’t freeze only in three times. One is in the year of the death of Chairman Mao Zedong, the second is when a Panchen Lama died and another is in the year of the death of Comrade Deng Xiaoping. The truth of this legend hasn’t been verified by anyone though, it indeed add more mystery to the lake.

Followed above are some tips I’d like to share with you. Firstly, despite the beautiful scenic spots scattered around Peiku-tso, you must have good psychological and physical quality and ready to endure hardship since the road is relatively poor. Secondly, there’s big temperature difference by the lake between day and night with very low temperature in the morning and in the evening but strong ultraviolet rays. So please take with you cold proof clothing, rain gear, sunscreen and common emergency drugs, etc. In addition, never catch or feed on the wild animals in the lake and collect any kinds of animal and plant samples to fully respect the religion and living habits of local minorities.