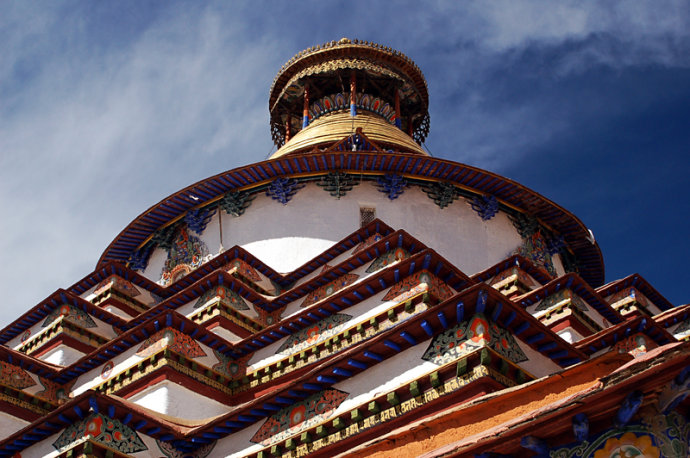 A Kumbum is a multi-storied aggregate of Buddhist chapels in Tibet. It forms part of Palcho Monastery.

The site is actually a collection of monasteries that were founded in 1418. There is a temple inside the complex with a large collection of unique Buddhist art inside and monks practicing their daily prayers and mantras. Although the monastery compound used to house many more monks than it does today, the site is well maintained by the Gelugpa sect and the monks that still reside at the Pelkor Chode.
The best known Kumbum is the Gyantse Kumbum, built in 1497 by a prince of Gyantse,but there are other surviving examples at Jonang, built by Dolpopa Sherab Gyaltsen and consecrated in 1333, and the Chung Riwoche Kumbun at Päl Riwoche which was built by Thang Tong Gyalpo who began work on it in 1449.A further Kumbum is at Kumbum Monastery near Xining in Qinghai province.
The Kumbum or great gomang (many-doored)chorten at Gyantse is a three-dimensional mandala, meant to portray the Buddhist cosmos. The Kumbum, like other mandalas, which are portrayed by a circle within a square, enables the devotee to take part in the Buddhist perception of the universe and can depict one's potential as they move through it. Mandalas are meant to aid an individual on the path to enlightenment. The Kumbum holds a vast number of images of deities throughout its structure with Vajradhara,the cosmic Buddha, at the top.
"The lhakangs of the nine levels of the Kumbum, decreasing in number at each level, are structured according to the compendium of Sakya tantras called Drubtab Kantu. Thus each lhakang and each level creates a mandala, and the entire Kumbum represents a three-dimensional path to the Buddha's enlightenment in terms of increasingly subtle tantric mandalas."
The halls and chapels of the monastery are not lit so it's a good idea to bring a flashlight.
Most of the monastic buildings in Gyantse were destroyed during the Cultural Revolution, but the Pelkor Chode and Kumbum were spared. The Kumbum, Pelkor Chode and the castle, Dzong, were products of the dynasty founded by Pelden Zangpo and built his most illustrious descent, Rabten Kunzan (1389-1442). The city became the main center for Tibet's wool trade with India, Nepal, Bhutan, and Sikkim. Nine major monasteries were built in the vicinity of the town.  In 1904 the Younghusband expedition attacked the Tibetan defenders, killing several hundred Tibetan soldiers. The expedition captured the castle and was billeted there for a month before proceeding to Lhasa
The Kumbum and Pelkor Chode are within the old walled monastery section of the town.The area used to contain 16 monasteries; nine belonged to the Gelugpas, four were Sakya, and three were affiliated with the Bu tradition founded by Buton Rinpoche. Now only two remain, a  larger deteriorating Sakya monastery and Riting Monastery a small Bu structure on the hillside behind Pelkor Chorde. On a high-walled structure up on the hill, a large tangka would have been displayed.