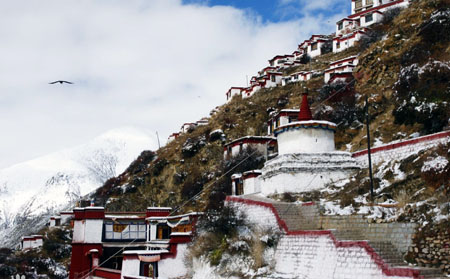 Reting Monastery was originally constructed by the founder of Kadampa Sect Dromtonpa in the year of 1057, dating back to more than 900 years ago, as the first temple of the Kadampa Sect.
Reformed by Tsongkhapa, it changed into Gelugpa temple in later year. Inside of the temple was dedicated to a Lord Buddha-Miaoji Guardian Warrior. About 2 hours’ driving from Lhasa, Reting Monastery is located in the Reting Tsampo Valley of a small village with green-clad plants surrounded by. Legend has it that once upon a time, the site of Reting is a blade of bald hill bare of vegetation.
Later on, Tibetan king Songtsen Gampo made an inspection tour here, sprinkled shampooing water on the hillside and prayed for blessings. Thereupon, 25000 verdant cypresses outgrew all over the mountain. “Reting” which means “the eradication of all the troubles till transcended beyond the realms of the three divisions of the universe”, its abbot was called Reting Rinpoche since 18th century and some of them played an important role in Tibetan history and China’s unification, making this monastery a significant political status in Tibet.
Attractions around:
In the west side of Reting Monastery lied a well-known stone land called “Pabang Dang” among Tibetans with “Pabang” referring to large stones and “Dang” meaning a lawn or a flatland, reputed as “Saint Road” by both monks and laymen. On the basis of the Tibetan folk tale, numerous heaven fairies descended to the Saint Road and set up altar and rally to bring poor sinners to regeneration on July 15th of each sheep year in the Tibetan calendar.
For hundreds of years, it had evolved into a Tibetan traditional festival celebrated every 12 years when devout men and women around would gather at this beautiful rock pasture from thousands of miles away, laid various offerings, chanting mantra, praying for peace, prosperity and rounding it off. During the celebration days, assorts of activities are taken place lively, such as horse racing, horseback archery, holding stones and dance around bonfire in night time.
In the afternoon on that day welcomes the peak of the celebration which is “cham”, meaning dancing to worship the god. Dancing to god is an old but unique art in traditional folk culture of Tibet. The wonderful imagination, touching plots of stories attracted generations of monks and laymen of Tibet.
Architectural characteristics:
Reting Monastery covers an area of about 25 acres (1667.5 square meters), faced south with the back to the north and demonstrated the architectural form of forward after three with several major buildings involved the Coqen Hall, Reting Lazang, etc.
The Coqen Hall is divided into Buddha Hall and scripture Hall with a building land of about 1 acre (666.7 square meters). The scripture Hall is where monks working and where religious activities held, around the scripture Hall are several small Halls enshrined a variety of figures of Buddha, scripture rolls and other religious articles. There built Senkang behind the scripture Hall serving as the living place for Dalai Lamas and prince regents when on their cruise time.
On west of the scripture Hall lied the Reting Lazang which was constructed in three layers and covering an area over 1 acre. The first floor is utilized as the warehouse and the second layer is where zasa and stewards lived while the third floor is the Reting Rinpoche’s palace and his scripture hall.
Inside of Reting Monastery, there are a lot of historic sites in it and according to folk rumors, once Dragon King offered a golden column and a jade column as the principal post of the hall when building the major hall of the temple. In addition, this temple is surrounded by 30 thousand ancient cypresses, aging over a millennium, were said to be the holy trees of Dromtonpa.
The legend also has it that the cypress forest was formed by Guanyin Bodhisattva when she was practicing Buddhism and after she reached consummation her hair shaved down turning to the cypress forest that never wither. Furthermore, there are other monuments such as thatched cottage and dew of spring which are all very worshipped by religious believers. As an important tourist destination in northern Tibet, Reting Monastery has some other unusual attracting that can’t be missed including the Welcoming Bird Festival on April 15th and the Pabangtangkuo Festival. The Welcoming Bird Festival is based on local weather condition when hundreds of monks enshrine cuckoo and dancing to god for blessings.