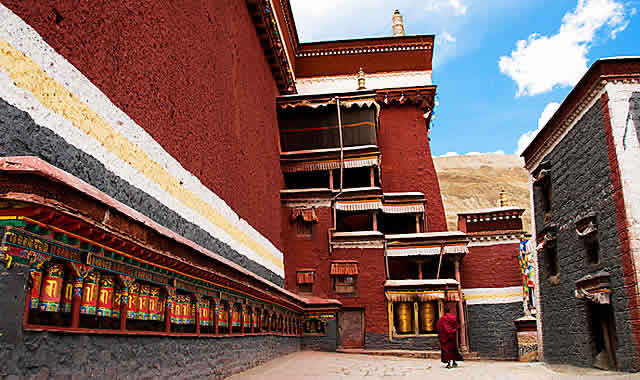 Located in Sakya County southwest of Shigatse,it is about 127 km west of Shigatse on the road to Tingri in Tibet.the Sakya Kloster (Sakya Monastery) is the principal monastery of the Sakyapa Sect of Tibetan Buddhism.

The monastery was built in 1073 and has more than 900 years of history. It is considered as the 'Second Danhuang'. The monastery houses around 3000 pieces of sutras and precious work of art that are over thousand years old.
One characteristic feature of the Sakya region is the colouring of its buildings. Unlike the standard whitewashing that you see elseswhere in Tibet, Sakya's building are ash grey with white and red vertical stripes. The colouring symbolishes the Rigsum Gonpo and stands as a mark of Sakya authority. Sakya literally means "pale earth".
Altough the founder of Sakyapa Sect once built a white palace on a grey clay hill near the northern bank of the Chun Qu River.The locals named the palace 'Sakya' which means grey soil. This was the Northern Monastery but today it is visible only as a ruin.
Sakya Kloster is famed as the 'Second Dunhuang' due to its colossal collection of numerous Tibetan Buddhist scriptures, murals and Thangkas.