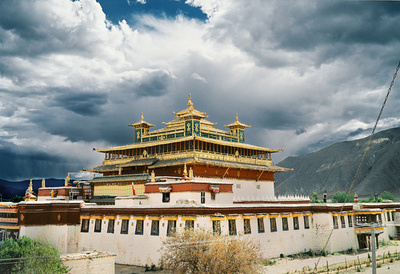 Samye Monastery is located in the quiet piedmont area of the Shannan Region,  at the foot of Mount Haibu Rishen, north of the Yarlung Tsangpo River. It is the first temple to be built in Tibet and the first complete with the three Buddhist jewels of Buddha, Dharma and Sangha. With these unique features, this splendid temple has become an attraction for visitors from near and far.

You can travel there by a regular bus from Lhasa to Samye Ferry and cross the river by boat or bridge. Then you can take the special monastery bus to get there. The temple was built by the Trisong Detsen (reigned 742-798) of the Tubo Kingdom and was presided over by the Buddhist master Padmasambhava.

The whole construction of the temple is very grandiose and complicated. It replicates the universe described in the sutras exactly.
The Samye Monastery is renowned for the characteristic art of its buildings and the vivid murals as well as other ancient relics stored within them.
Before 2011, the only significant building work was a central government financed facelift of the "golden roof" and the third floor of Wuzi Hall, in 1989.
Now Samye's 13 Buddha halls, a tower displaying a Buddha, and other major buildings are being renovated. Among them, the Hall of Safeguarding Buddha will cost about 50 million yuan.
The monks have also helped with the renovations.
The three-story Wuzi Hall is the soul of the whole monastery. Its design is very special. All of the layers follow different styles, the bottom Tibetan, the middle Han and the top Indian. Hence the monastery is also called the 'Three-styled Temple'. There are also many substantial murals here.
The mountain top is also the best place to photograph a panoramic view of the monastery.